When we push or pull on a body, we are said to exert a force on it. Forces can also be exerted by inanimate objects. For example, a locomotive exerts a force on a train it is pulling or pushing. Similarly, compressed air in a container exerts a force on the wall of the container.The force may produce motion of the body or may cause the body to deform. Energy may be expended in the process, or the applied force may be balanced by an opposing force so that no energy is expended.

The distortion or the displacement that occurs when a body is subjected to a force occurs in accordance with Hooke's and Newton's laws governing the behavior of elastic and non-elastic bodies.

Sir Isaac Newton (1642-1727) was the first to state the basic laws of motion of bodies. He postulated three fundamental principles:

During the same era, Robert Hooke (1635-1703) observed that when an elastic body is subjected to stress its dimension or shape changes in proportion to the applied stress over a range of stresses. This led to Hooke's law which states that strain, the relative change in dimension, is proportional to stress. If the stress applied to a body goes beyond a certain value known as the elastic limit , the body does not return to its original state once the stress is removed. Hooke's law applies only in the region below the elastic limit.

Because measurement of distortion or of motion provides the means of determining the magnitude of a force, Newton's and Hooke's laws are key concepts in force measurements. 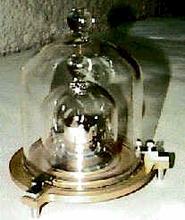 The unit of force is derived from a fundamental quantity, mass. The fundamental unit of mass is the kilogram (kg). The kilogram itself is defined as the mass of a platinum-iridium cylinder kept at the International Bureau of Weights and Measures at Sevres, near Paris, France. A replica of this cylinder is kept at the National Institute of Standards and Technology in Gaithersburg, MD. It serves as the standard of mass for the US.

The unit of force is the Newton (N). By definition, the newton is the force required to give a one-kilogram mass an acceleration of one meter per second squared.