How did the Proving Ring Come About

With industrialization gaining momentum in the United States after the Civil War and construction sprouting up everywhere, a need arose for better ways to test the materials used in machinery, buildings and elsewhere. With the advent of the 20th century, and the birth of aviation, the demand for lightweight materials and for more efficient structural design further increased. However, without some means of testing these new materials and designs before use, explosions, building collapses and other mishaps were likely.

The task was assigned to the Engineering Mechanics Section, headed by H. L. Whittemore who in turn assigned the project to S. N. Petrenko, an engineer in the section. 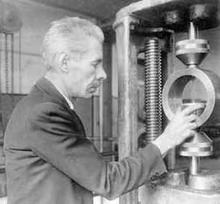 After examining as many Brinell Hardness testing machines as possible, Petrenko came to the conclusion that the disagreements among test results were caused by inaccuracies in the measurements of the forces applied during the tests. In those days the Brinell machines consisted of a frame, a hydraulic piston, a hand pump and a pressure gauge. Petrenko reasoned that if forces were applied by deadweights more consistent results would be produced. A deadweight machine with three weights made of steel trays filled with concrete was constructed at NBS. The results looked promising.

The early success of Petrenko with his deadweight machine led to the construction of a better machine, one with cast iron weights and a better loading technique. While materials could now be tested in the laboratory, a challenge remained as to how to transfer the accuracy and constancy of the test with deadweight loads to material testing machines used in the field. Petrenko reasoned that this transfer could be accomplished by a simple metal ring equipped with a means of measuring its deflection under load. Whittemore in turn suggested the vibrating reed and micrometer screw. Thus was born the Whittmore-Petrenko Proving Ring, later known simply as the Proving Ring.

Devices combining the ideas of Petrenko and Whittemore were built in the National Bureau of Standards shops in the early 1920's. On September 14, 1926 Whittemore and Petrenko filed a patent , number 1648375, with the Patent Office. The patent was granted on November 8, 1927. Whittemore and Petrenko filed a second patent, number 1927478, on August 29, 1929 to reflect improvements in the design of the proving ring. This patent was granted on September 19, 1933.

The business depression of the 1930's combined with the difficulties involved in manufacturing proving rings discouraged commercial production of the ring. Whittemore was at a loss to get them into service until he finally prevailed upon a distant relative, W.S. Morehouse, who had a small machine shop in York, PA to begin commercial production. The Morehouse Instrument Company still produces proving rings today.