The Vis/NIR SCF is a monochromator-based system that typically measures the spectral power responsivity of photodiodes in the spectral region of 350 nm to 1800 nm. The Vis/NIR SCF operates from 350 nm to 1100 nm using silicon photodiodes as working standards and from 700 nm to 1800 nm using indium gallium arsenide (InGaAs) photodiodes as working standards. The spatial uniformity of a detector's power responsivity can also be measured.

The Vis/NIR SCF uses automated translation stages to position the photodetectors for measurement. The test detectors as well as the working standards are fixed onto optical mounts that rotate and tilt for accurate alignment. A variety of sources can be selected. Typically a 100 W quartz-halogen lamp is used as the source in the Vis/NIR SCF. A shutter is located just after the monochromator exit slit. A monitor detector located after the monochromator measures source fluctuations. The detectors and the exit optics are enclosed in a light tight box. A diagram of the Vis/NIR SCF is shown below. 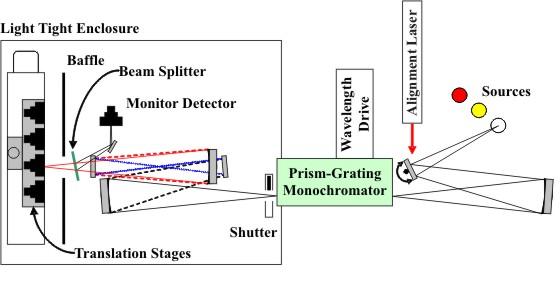 The UV SCF is a monochromator-based system that measures the uniformity and spectral power responsivity of photodetectors in the 200 nm to 500 nm spectral region. The UV SCF is very similar in configuration and operation to the Vis/NIR SCF. 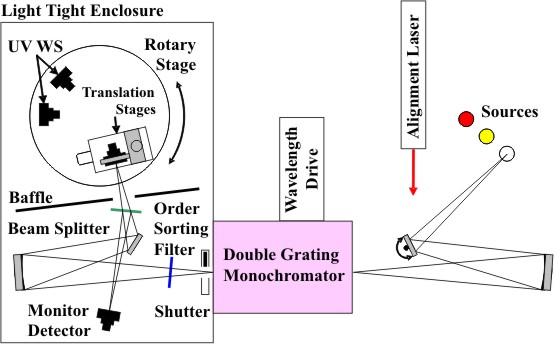