The 'Gang of Five' and the SI Revolution

Although I grew up in Brooklyn, New York, I was never a gang member there. My gang membership came much later and in an entirely unexpected way. No, more accurately, I was a nerd who was interested in taking things apart to figure out how they worked, playing with a crystal radio, making an electric go-cart (I’ve since moved up to a Tesla), launching rockets, and hooking amplifiers together with speakers to produce a stereo record player before they were widely available, among other things. One of my early nerd lessons came from my father when I was about 5 years old after I proudly showed him that I had taken my tricycle apart, and he said, “Well, now figure out how to put it back together or you will not have a tricycle.”

One of the things that influenced me to come to the National Institute of Standards and Technology (NIST) was the important work it was doing on providing values of the fundamental constants. These are parameters in the nist-equations of physics, such as the speed of light. This work is related to my theoretical work on quantum electrodynamics (QED), which describes how light and matter interact. Many of the fundamental constants are derived from experiment using QED theory.

One day in 1995, I received a message from Jean Gallagher in NIST’s Standard Reference Data program, headed by John Rumble at the time, encouraging me to get involved in work on evaluating fundamental physical constants. This is one of the core missions of NIST and was in need of rejuvenation since only one adjustment had been done in the previous 21 years. I was happy to do this because it was well in line with my primary interest in QED. Since then, Barry Taylor and I, and more recently David Newell and Eite Tiesinga, have provided updated values for the constants every four years up to the latest set of values due to be made public on May 20, 2019, to coincide with the redefinition of the International System of Units (SI).

This involvement with the fundamental constants caused me to be interested in attending a talk in 1998 by NIST’s Richard Steiner on the status of the watt balance project (now called the Kibble balance) to measure the Planck constant, an important quantity in quantum physics. It was enlightening to learn how a precisely calibrated kilogram mass—something that we might more commonly associate with 19th-century mechanics—could be used to make an accurate measurement of this constant, fundamental to 20th-century quantum physics. This connection suggested that if a mass standard could be used to get a value for the Planck constant, then this could be turned around to use a value for the Planck constant to get a mass standard. At the time, the Kibble balance was primarily viewed as a way of monitoring changes in the kilogram standards, but not necessarily a way of defining the kilogram. I mentioned this prospect to Barry Taylor on the way back from the talk, and subsequent discussion eventually led to a joint 1999 Metrologia paper, On the redefinition of the kilogram, proposing this way of defining the kilogram.

While this paper was percolating, Edwin Williams, a NIST colleague, stopped by to point out that if the Planck constant were known exactly, many other constants would be either exactly or more accurately known as a consequence. This seemed to me a sufficiently important observation that I suggested that he, Barry, and I should publish a paper giving those values to help motivate the prospect of redefining the SI by making the Planck constant exact. I also got in touch with Terry Quinn, a former director of the International Bureau of Weights and Measures (BIPM), and invited him to join the collaboration. This was based on his obvious influence in the field and his interest in redefining the SI sooner rather than later.

At the same time, Barry invited Ian Mills of the University of Reading, U.K., to join because they were old friends and Ian was at the time the president of the Consultative Committee for Units (CCU), so he was a good person to have on board. This paper evolved from simply being an informative listing to a more forceful advocation of making the change, as embodied in the title: Redefinition of the kilogram: a decision whose time has come. The aggressive title for this 2005 Metrologia paper led to an unexpected backlash and earned us the appellation “Gang of Five.” This was despite the fact that redefining the SI had been under consideration by the metrology community for some time.

However, we kept at it with a subsequent 2006 Metrologia paper with the more benign title Redefinition of the kilogram, ampere, kelvin, and mole: a proposed approach to implementing CIPM recommendation 1 (CI-2005). This second paper contained two particularly noteworthy changes from the previous paper besides the inclusion of additional units. First, the previous paper suggested making either the Planck constant or the Avogadro constant exact, with no particular bias. I personally strongly favored using the Planck constant approach, mainly because it is a universal constant in quantum mechanics that applies equally to all fundamental particles, much like the speed of light is fundamental to relativity. This met with resistance from my coauthors, who advocated making the Avogadro constant exact, which would make the mass of a carbon atom in kilograms exact. Then the kilogram would be a known number of carbon atoms.

The latter approach would be easier for the public to understand, a point often made at the CCU meetings where these options were discussed at length. These two options are not compatible, as they provide two conflicting definitions of the kilogram. By the time the second paper was completed, the authors had reached a consensus on the Planck constant approach because it would have a favorable impact on precise electrical measurements, provided the electron charge were also made exact. This approach was eventually adopted by the CCU after a good deal of debate over the years.

(The astute reader may wonder why the revised SI can have both the Planck constant and the Avogadro constant be exact when these options were not compatible for defining the kilogram. The answer is that in the revised SI, the mole is also redefined to be a certain number of particles, rather than the number in 0.012 kilograms of carbon. This means that the Avogadro constant is no longer directly connected to the kilogram.)

The second new feature of the second paper was the suggestion to simply give the values of the constants to define the SI, rather than giving elaborate but unrealistic physical scenarios such as the force between two infinite wires for the definition of the ampere, the SI unit of electric current.

A third paper entitled Adapting the International System of Units to the twenty-first century, published by the Gang in 2011 in the Philosophical Transactions of the Royal Society A, provided additional perspective on the redefinition in the form that it has finally taken. It should be emphasized that the change in the SI, which was driven by advances in the relevant experiments, could be considered an inevitability, and the contribution of the Gang of Five was hopefully at least a catalyst that helped to move things along. 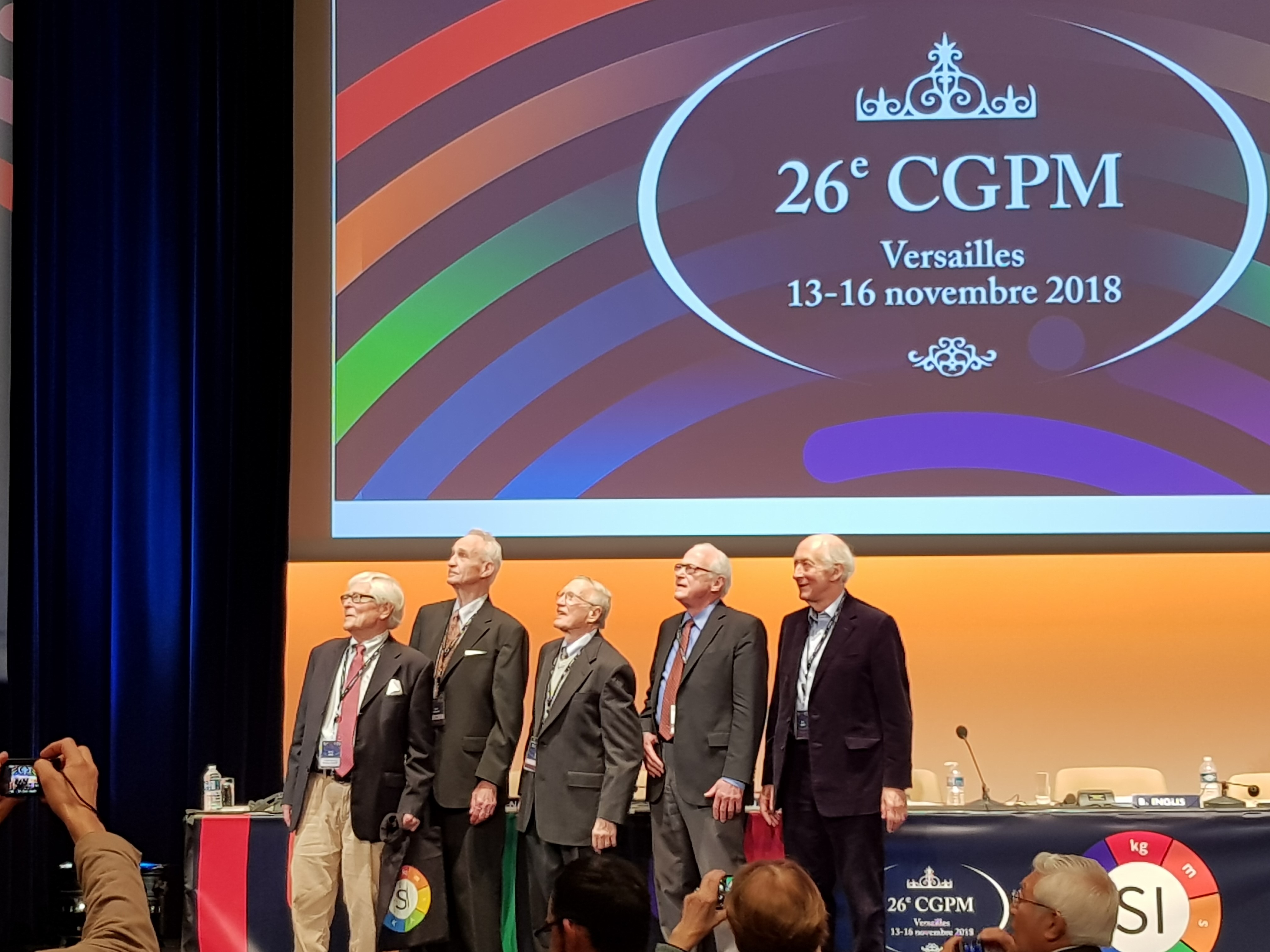 The final approval of the redefinition was made in Versailles, France, in November 2018. The accompanying photo of the Gang was taken on the stage of the auditorium where delegates from around the world voted, agreeing to the change. The members, from left to right, are Ian Mills, Edwin Williams, Barry Taylor, me and Terry Quinn. It may appear that we are looking up seeking divine approval, but actually, a documentarian named Amy Young, who was in the balcony, had asked us to look up to the camera.

My colleagues and I in the Gang of Five don’t know exactly how the redefinition will affect people’s lives in the future, but we can hope that it is a step forward for the SI and science and technology. I’m proud to have been a member of the Gang and to have played some small part in the SI revolution.

Peter Mohr received a Ph.D. in Physics from the University of California, Berkeley, in 1973. He did postdoctoral work at Lawrence Berkeley National Laboratory. Before coming to NIST in 1987 to work as...

As the Feb. 1, 2021 deadline approaches for early-career researchers to join the National Institute of Standards and Technology (NIST) National Research Council

Logic puzzles, brain teasers and mathematical riddles fascinated me throughout my childhood, so I feel lucky that I ended up with a career that never lacks for

2020 has been a challenging year, but we at the National Institute of Standards and Technology (NIST) have worked as hard as we can to fulfill our mission for

Was the Universe expansion factored in, since I doubt that the Planck constant will stay constant when there is a considerable change in the Universe endo-energy content, including the sum quantity of the Universe Quantum energy, as the Universe undergo a hypothesized accelerated expansion which I assume directly influence the value of Planck Constant?

Thanks for your question. The Planck constant has been unchanging as far as measurements in the past have been made. There is not reason to expect it to change in the future.

dizifilmlinkleri.site Planck constant will stay constant when there is a considerable change in the Universe endo-energy