By: Mark Tyra and Keith Martin

In what is currently a large construction zone in the center of the National Institute of Standards and Technology's Gaithersburg, Maryland, campus, the Radiation Physics building is undergoing an expansion and much-needed modernization. Unlike the Mid-Century Modern architecture that marks many of the buildings at NIST, the Radiation Physics building has an accompanying decorative wall featuring glass bricks arranged in a peculiar fashion. To most, this is simply a glass wall with diagonally arranged blocks tinted in faded oranges and blues. But to anyone who has studied the properties of the atomic nucleus, the pattern depicted on this wall is instantly recognizable as an homage to a scientific table that represents nuclear isotopes of some of the chemical elements of the periodic table and the nuclear stability of those isotopes: the table of the nuclides.

The design for the wall came about by serendipity. In the late 1960s, a covered walkway held up by steel posts was built to connect the building with a newly constructed Isotope separator laboratory. This laboratory, which is now used for calibrating medical isotopes and other purposes, sits just west of the rest of the building, purposefully separate from the main building for radiological safety reasons. The covered walkway allowed all-weather passage between the two buildings. But the walkway was quickly renamed a “breezeway” for its tendency to funnel a strong wind between the two buildings. To correct this, in 1969 a glass-block wall would be added to the north-facing side of the walkway to block prevailing winds while still allowing for natural daytime illumination.

Basil Fiorito of the Plant Division came up with a design for the wall using both clear and colored glass blocks. When Radioactivity Section Chief Wilfrid Mann, with his colleague Frank Schima, reviewed Fiorito’s design, Schima noticed a chart of the nuclides hung on the wall of Mann’s office and mused “Why not [portray] the nuclide chart [for the design]?” All three men agreed to the idea. But others found it a tougher sell.

“Are you serious?” was often the response when Mann told people about the planned design. Mann, according to people who worked with him, had an artistic bent, and he loved the idea of the wall’s design visually representing research underway in the building. Mann assured his incredulous colleagues that he was quite serious about building the nuclide wall.

It was not possible to depict the entire nuclide chart on the wall, so nuclides for only the first 31 elements on the chart — from hydrogen to gallium — are displayed on the two center panels of the wall. Making gallium the final element displayed is intriguing, and we like to think of that choice as a kind of secret message for those in the know.

Wilfrid Mann, as mentioned above, was involved in the design of the wall. Before his time at NIST, he had been involved in intelligence work during World War II, and—before the war—discovered the isotope gallium-67 (which is now used as a medical radioisotope in nuclear-medicine imaging). Physicists who know of Mann’s work would recognize that the nuclides on the wall stop with Mann’s discovered isotope. It’s like his secret signature on the wall, pointing toward his involvement in an artistic display that is otherwise devoid of any sign interpreting its purpose or origin.

Although the Radiation Physics building is undergoing a significant modernization and expansion, the colorful nuclide wall will remain, puzzling and intriguing future NISTers.

With luck, and, possibly, repair, “the wall of the nuclides” will continue to serve as a symbol showing us that art and science can exist side by side even at NIST.

The table of nuclides 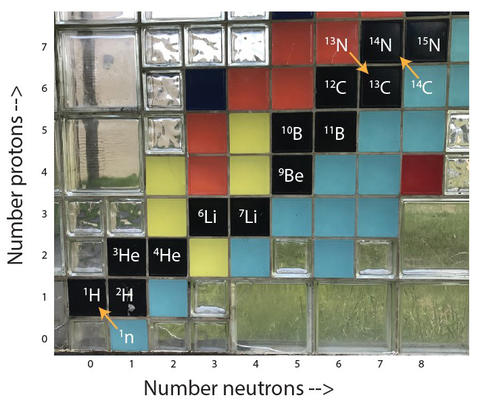 In this close-up photo of part of the wall, we've added text to show how the table (and wall!) of the nuclides works. The horizontal axis depicts each nuclide’s number of neutrons and the vertical axis depicts the number of protons.

The colors show each nuclide’s stability or radioactive decay type: Black tiles represent stable nuclides, while colored tiles represent radioactive nuclides with the tile color indicating the nuclear decay process that the radioactive species will undergo. For example, carbon-14 (14C in the photo) is unstable and decays into stable nitrogen-14, a process that is useful to archeologists who carbon-date artifacts. Similarly, nitrogen-13 (also shown) will decay to become carbon-13.

As these examples show, the table is good at showing how elements can be transmuted into different elements. To give another example, if you take carbon-13, you can add a neutron to make carbon-14 (which later decays to nitrogen).

Deep inside stars and in the beamlines radiating from NIST’s reactor, neutrons are added to elements to create new elements. Considering how the universe began with mostly hydrogen and helium, it is this process of transmutation (aka nucleosynthesis, which is to say, “alchemy”) that formed almost all the elements we interact with daily.

The authors of this article want to thank Bert Coursey, Lisa Karam, and Ron Collé for their recollections, revisions, and photos, which contributed greatly to this article.

Mark Tyra is an isotope geochemist working to produce nuclear forensics reference materials at NIST. He got his Ph.D. from the University of New Mexico using stable and radiogenic isotopes of minerals...

Keith Martin is a librarian at the NIST Research Library. He often comes across interesting stories from NIST’s past while working with NIST scientists on their current projects.

Most people think that understanding and preserving our cultural heritage is mainly the concern of the social sciences and humanities, such as archaeology and

Science, while important, is often thought of as, well, kind of dry in the ocular department. The visuals commonly associated with scientific endeavors are

Measurement is a subject that touches upon just about everything, from the food we eat and the medicines we take to our investigations of the fundamental

If you have any questions about our blog, please contact us at takingmeasure [at] nist.gov.