From this day forward, “America Needs Baldrige” will be our rally cry, said Larry Potterfield, founder and CEO of MidwayUSA, an internet retailer of shooting, hunting, and outdoor products. Greeted with cheers, Potterfield then proudly displayed what he proposes should be the unofficial Baldrige jacket, featuring patches with Midway’s two Baldrige Award-winning ribbons and a fabric lining of the Baldrige Award logo.

Potterfield focused his presentation on “what Baldrige can do for you based on what Baldrige has done for MidwayUSA,” which he said is beginning its third phase of Baldrige improvements. And he shared what MidwayUSA has done for the Baldrige community: a sharing website at http://americaneedsbaldrige.com/.

“Everything we know, we try to put on there,” said Potterfield. He encouraged other organizations to come and visit to learn how MidwayUSA aspires to be “the purist Baldrige colony on the planet.” In a systematic fashion, on the fourth Tuesday of every month, we will immerse you in Baldrige, he added.

Development of a Hall of Fame Leadership Team

“The single biggest thing that Baldrige can do for you is to build a hall of fame leadership team,” said Potterfield. And the biggest part of that is leadership development, which helps team members focus on the 30 key leadership and management principles found in the Baldrige Excellence Framework, he said.

“If you have a leadership team that can keep those 30 balls in the air at one time, you’re going to get outstanding results. . . . Leadership and management principles, you have to focus on them,” he added. Those principles can be honed at Baldrige examiner training, both at the state level (at Alliance for Performance Excellence programs) and at the national level, training for which Potterfield says he’s a big proponent. He added that these principles and the characteristics of a hall of fame leadership team result in a “world-class leadership system.”

A Vision Statement to Drive Sustainability

A world-class leadership system starts with a mission statement, said Potterfield, ends with the financial statement, and, the most important part of all, emphasizes the vision.

“One of the challenges that I see for [many organizations] is vision. I don’t think people put enough thought into that vision statement,” he said. At MidwayUSA, the vision statement belongs to the board of directors, which is less likely to change as abruptly as a CEO may change. “We want this vision statement to drive MidwayUSA as a company for years and years to come as part of our sustainability. . . . All employees . . . understand who Midway wants to be,” he added.

Potterfield walked through the evolution of the current vision statement: To be the best run, most respected business in America for the benefit of our Customers.

He said the most recent changes to the vision include the concept of respect, as, since winning its two Baldrige Awards, the organization has been receiving a lot of respect in the Baldrige community and in the shooting sports community. The organization also “understood the absolute importance of tying the customer into everything we do,” said Potterfield. 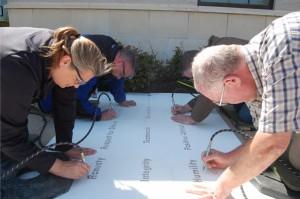 In July 2015, MidwayUSA completed Operation Concrete Values, a project where its values were engraved by employees on sidewalks throughout the 21-acre campus, covering 17 entrances for a total of 20 sets of company values: honesty, integrity, humility, respect for others, teamwork, positive attitude, accountability, stewardship, and loyalty.

But it wasn’t easy developing those values, said Potterfield.

But he said that MidwayUSA came to “understand that companies and organizations don’t have values . . . only people have values. And when we got that realization, we picked the values that we thought were most important to human beings, and then we built an organization of people who shared those values. . . . I’m a great fan of diversity, but if you don’t have these values, you can’t get on at Midway and you can’t stay.”

The most recent value added was humility, said Potterfield, because the company never wanted any person in the organization to put himself or herself before the customer.

The values of teamwork, positive attitude, respect for others (which includes posted signs reminding employees what respect for others looks like in lavatories and conference rooms) were chosen to sustain the Midway organization well into the future, he said.

Goals and Other Baldrige Inspirations

Potterfield said the Baldrige Criteria ask a whole bunch of questions; “those must be important questions or they wouldn’t ask them.” A question about stakeholders caused some initial confusion because leaders had never really heard that term before, he said; “and then we figured out that our key stakeholders were the customers, the employees, the suppliers/partners, and the shareholders [in that order]. . . . These are the four stakeholders that . . . we are trying to satisfy.”

Another question was about goals. “In most organizations, the bottom-line is the number one goal,” said Potterfield, “but for us, of course not. At MidwayUSA, customer satisfaction is number one because customers are the number one stakeholder. . . . What we figured is that if you take care of the customers and you take care of the employees and you pay your bills on time . . . well, the shareholders are just going to smile because they will have to rent wheelbarrows to take money to the bank.”

Long-term goals for MidwayUSA include increasing the total number of customers and sales volume, remaining ISO 9001 certified, and receiving the Baldrige Award in the next year of eligibility. That’s 2021 for MidwayUSA. Said Potterfield, “I’ll be back.”

Baldrige also asks a question about your organizational culture, so MidwayUSA built a culture statement of 35 items that is now plastered all over the organization. There are four items on the culture statement: continuous improvement, purest Baldrige colony in the land, trust, and knowledge sharing. “You’ll notice that trust is not one of our values,” added Potterfield. “Trust is something you get if you exhibit those values. And that’s why it’s on our culture statement. We want a culture of trust by having strong values. And the leadership team lives those values.”

Potterfield ended his presentation by reminding folks of the rally cry, "That’s the way it is. I’m Larry Potterfield with MidwayUSA, and America needs Baldrige.”

The first Monday in September is dedicated to the social and economic achievements of American workers. It constitutes a yearly national tribute to the

Great
Thanks you very much