According to now-retired President and CEO Dean Kappel, that unique space sets the context for how critical Mid-America Transplant’s workforce is to saving lives and how the Baldrige Excellence Framework and its Criteria have inspired the nonprofit and become its business model. At the Baldrige Quest Conference, Kappel mused on his 30 years at Mid-America and some of what he learned from a leadership perspective.

Mid-America is one of 58 organ procurement organizations (OPOs) in the United States certified by the Centers for Medicare and Medicaid Services. OPOs are responsible for two main functions within their designated service areas: (1) increase the number of registered donors, and (2) coordinate the donation process when actual donors become available.

In 1986, when he joined Mid-America Transplant, Kappel said there were just three employees, now 180, and the budget was under $1 million; today it is somewhere around $40 million. Its designated service area covers parts of three states (Missouri, Illinois, and Arkansas), 84 counties, and 4.7 million people. Three customer groups are identified: transplant centers, tissue processors, and surgeons.

The greatest challenge, Kappel said, is that from 122 partner hospitals that refer potential donors, there are 30,000 deaths each year. Of those deaths, only 4,400 are medically eligible to be donors, and of those 4,400, only 2,100 actually become donors.

“For organ donation, that’s less than 1%,” said Kappel. “From our perspective, as we’re looking at these referrals, it is like looking for a needle in a haystack. Consider the number and size of hospitals and our ability to identify potential donors in a timely basis, this requires us to work very effectively with hospital staff. . . . Our biggest challenge is to meet the ever-increasing need. Today, 120,000 people are waiting for a life-saving transplant in the U.S. This makes each one of these opportunities especially critical to us.”

Kappel said best-selling author Jim Collins must be a “Baldrige geek,” because his observations are always rooted in data and research. One of Collins’ nist-quotes describes Mid-America’s approach to leadership, says Kappel:

For leaders to make something great, their ambitions need to be for the greatness of the work, rather than for themselves. It’s not about personal ambition. It’s about achieving the mission.

With this approach in mind, Kappel said he spent the 1990s always looking for a better way for how the organization could increase its life-saving results. He would attend meetings throughout the country identifying best practices and “management du jour” approaches that were exciting but never seemed to take root. He joked that during a recent retirement party, his staff members admitted that they gave their leader six to nine months to try a new leadership approach, knowing that he would soon be on to something new.

But Kappel said, “once we began to get a glimpse of what Baldrige can do for us, we were moving in a different direction.” He points out though, leading an organization to excellence takes perseverance; "for senior leaders, it’s really critical for you to keep going.” Kappel shared that before receiving the Baldrige Award in 2015, Mid-America submitted eight Baldrige applications, received five site visits, and was honored with two state quality awards.

The Path to Baldrige

In the early 2000s, the federal government’s Health Resources and Services Administration implemented a collaborative so that OPOs could come together and share best practices. “In fact, donations got better,” said Kappel, “but what I observed during that time is that some organizations got better but had difficulty holding those gains, and very few saw continuous improvement.”

Next, Kappel said he attended a meeting featuring SSM Health Care, the first health care organization to receive the Baldrige Award; “I heard how they implemented the Criteria to consistently improve their results. I think they’re on to something. . . . I began to get appreciation for what this is all about. . . . That set us on a pathway.”

Third, Kappel heard a presentation from Sister Mary Jean Ryan, then SSM’s CEO, now board chair, about the importance of mission. Kappel explained how Ryan asked her staff to develop the system’s mission, with two caveats: be short enough that she could remember it and fit on the side of a coffee cup.

Thinking this was “brilliance,” Kappel pulled together a staff committee at Mid-America, and after about a year, the committee came back with the mission: We save lives through excellence in organ and tissue donation. The mission was approved by senior leaders and ratified by the board of directors; it is now annually validated during strategic planning.

“One of the things that Baldrige does is it really asks you as senior leaders to identify your core competencies—not things you wish you were or hope you are,” said Kappel. “These have to be things that you are, and by the way, you have to have data to support them.”

Mid-America’s two core competencies are a mission-driven workforce and an innovative culture.

Kappel said Mid-America’s mission to save lives is of utter importance to the workforce who “bring a brighter light to death.” By surveying employees in terms of satisfaction and more importantly engagement, he said, the organization knows the three reasons, in this order, that employees work for the organization: connection to the mission, coworkers, and benefits.

“We recruit, retain, develop, and award our employees because they are critical to our success. We have best-in-class results looking at their connection to our mission. Our staff know why they work for us, how they relate to the mission, and how critical they are to that mission,” he added.

Kappel said in the early 2000s, as Mid-America “began to walk down Baldrige pathways,” it implemented systems to get feedback from customers and partners. A transplant surgeon reported that the process of organ donation took a very long time—24 to 36 hours. And while Mid-America staff were in the hospital facilitating the donation, they were disruptive. Could the organization shorten the amount of time that staff were there?

Mid-America spent the next year trying to figure out ways to shorten time frames, with little success, Kappel said, until it stumbled on the idea to create its own organ recovery facility in its own space to move the donor out of the hospital and take that burden off partner institutions. Mid-America is now the first OPO in the world to develop this capability. Kappel said 90% of all organ donors are now transferred to Mid-America’s facility, even if the hospital is hundreds of miles away, and partner satisfaction has gone way up.

“But there were two unintended consequences,” Kappel said, “I think that’s one of the great things about innovation, because there are certain things that you are trying to achieve, but sometimes even more important things happen.” Mid-America has increased the number of organs transplanted by managing donors more effectively in its own space. In addition, and most surprising, costs have gone down; organ donations in a hospital on average cost about $30,000, at Mid-America’s own facility it’s less than $10,000.

“We are the lowest-cost provider in the central part of the United States, and we are able to manage our costs much more effectively as a result of that,” he said. 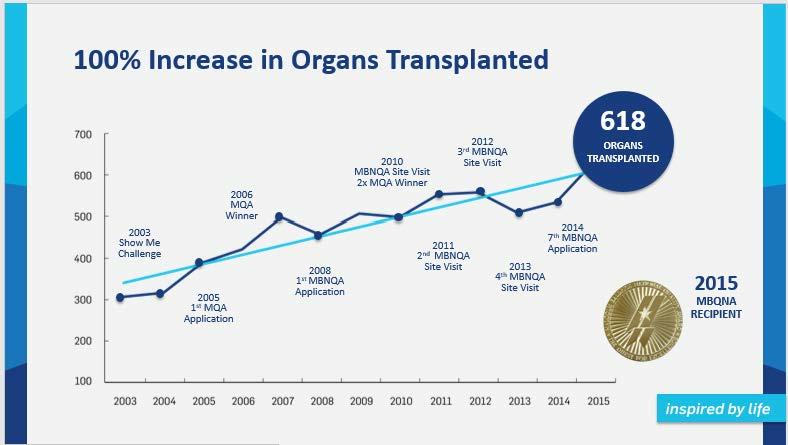 With 98% customer satisfaction on its processes, Mid-American has doubled the number of its organ transplants from 300 in the early 2000s to 600 today, Kappel said; adding that he had similar data for tissue donation. And due to Kappel’s passion, eight other OPOs are now electing to adopt the Baldrige Criteria as their own business models.

To learn more about organ donation, visit Mid-America’s website, and be sure to talk with your own family members about your wishes.