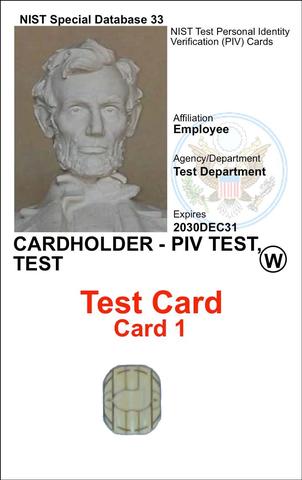 NOTICE: NIST is in the process of developing an updated version of the NIST test PIV Cards. FIPS 201-2 was published in September 2013 and stated that all PIV Cards issued after September 2014 needed to be issued in compliance with FIPS 201-2. As FIPS 201-2 primarily differs from FIPS 201-1 by making some features mandatory that were previously optional, systems developed to work with the current set of NIST test PIV Cards should have no problems working with FIPS 201-2-compliant PIV Cards. However, going forward, there is no longer a need for the test set to include examples of cards that do comply with FIPS 201-2. In addition, SP 800-73-4 introduced new optional features for PIV Cards (e.g., secure messaging), and NIST's goal is for the updated version of the test cards to include examples of these new features.

OUT OF STock.  Estimated availability early 2021.

If you would like to be notified when the new cards are available, please send an email to data@nist.gov

Effective immediately, there will be a minimum $30.00 shipping charge for all international shipments of databases via UPS International. Customer will be responsible for their own duties, tax, and VAT. Contact 301 975 2200 or data@nist.gov if you have questions.

The set of NIST Test PIV Cards contains sixteen smart cards that are loaded with a PIV Card Application, as specified in NIST Special Publication 800-73-3. The PIV Card Applications on the smart cards are loaded with test data and keys that are similar to what might appear on actual PIV Cards, with the exception that the certificates on the test PIV Cards were issued from a test public key infrastructure.

The set of test cards includes not only examples that are similar to cards issued today, but also examples of cards with features that are expected to appear in cards that will be issued in the future. For example, while the certificates and data objects on most, if not all, cards issued today are signed using RSA PKCS #1 v1.5, the set of test cards include examples of certificates and data objects that are signed using each of the algorithms and key sizes listed in Table 3-3 of Special Publication 800-78-3, including RSASSA-PSS and ECDSA. Similarly, the infrastructure supporting the test cards provides examples of CRLs and OCSP responses that are signed using each of these signature algorithms. The set of test cards also includes certificates with elliptic curve subject public keys in addition to RSA subject public keys, as is permitted by Table 3-1 of Special Publication 800-78-3. The set of test cards, collectively, also include all of the mandatory and optional data objects listed in Section 3 of SP 800-73-3 Part 1, except for Cardholder Iris Images. Several of the cards include a Key History object along with retired key management keys.

If you have any questions regarding this website, or notice any problems or inaccurate information, please contact the webmaster by sending e-mail to: data@nist.gov