In Situ Characterization of Nanoscale Gas-Solid Interactions by TEM

Observing and measuring the dynamic changes that take place at the nanometer scale during the synthesis and operation of active nanostructures is vital for understanding and ultimately controlling their properties. Characterization of such complex, time-dependent transformations requires the use of advanced methodologies that enable the underlying chemical and physical processes to be identified and understood. We are developing environmental scanning transmission electron microscopy (ESTEM) measurement methods for in situ observations and quantifying the nanoscale dynamic processes affecting both the material structure and chemistry during gas-solid interactions.

Catalysis is integral to a wide variety of processes throughout the chemical industry, and recently has become an important route to synthesizing one-dimensional (1-D) nanomaterials, including carbon nanotubes and nanowires. However, observing and measuring the reaction kinetics of such catalytic processes at the nanometer scale is particularly challenging. Although TEM-based techniques are valuable for nanoscale characterization, conventional TEMs function only under high vacuum conditions.

Recently, the column of a TEM/scanning-TEM (STEM) has been modified to permit the introduction of reactive gasses at pressures up to 2,000 Pa (20 mbar) in the sample region. We have acquired an ESTEM with a monochromator and aberration (Cs) corrector that is now fully operational. Current projects include the measurement of redox processes of ceria-based anode materials for solid oxide fuel cell applications, the effect of environmental conditions on local surface plasmon resonance in nano-sized metal particles, and the growth kinetics of carbon nanotubes.

The redox process is central to the functioning of a solid oxide fuel cell (SOFC) anode. We are investigating the redox properties of doped ceria as potential anode materials for SOFCs operating at intermediate temperature (≈700 °C). We are especially interested in the nanoscale measurements of the redox reaction at the three phase boundary (metal, doped ceria, and gas). We measure time-resolved and temperature-resolved changes in the oxidation state of cerium using electron energy-loss spectroscopy with a spatial resolution of 0.2 nm and relate it to the structural and morphological changes imaged using electron diffraction, TEM and STEM.

Metal nanoparticles can act as sensors because of their surface plasmon resonance properties. Various local surface plasmon resonance (LSPR) modes can be excited that are much smaller than the wavelength of the exciting light, leading to nanoscale optical confinement. The LSPR modes and energies are dependent on the size and shape of the particle, and on the dielectric function of their environment. Currently optical methods are used to understand the collective behavior of metal nanoparticles on different supports and/or in gaseous environments. We are developing methods using electron energy-loss spectroscopy in controlled gaseous environments in the ESTEM that combines high energy resolution (0.1 eV) and high spatial resolution (< 1 nm). These new methods will allow us to measure LSPR energies and their variation across the surfaces and corners of individual nanoparticles in order to better understand and optimize their behavior.

The ability to characterize the growth of nanostructures in situ is needed to support their incorporation into practical devices. For example, devices based on CNTs are expected to have broad commercial applications, including in biological and chemical sensors, fuel cells, and hydrogen storage. However, CNTs vary both in structure (e.g., single-wall versus multi-wall) and morphology (e.g. length and diameter). For most of the promising applications, one specific type of structure and morphology is needed. Therefore, it is extremely important to be able to precisely control the fabrication and growth of CNTs.

Achieving precise control of CNT structure during growth has proven to be a major challenge because of the many variables that affect the process, including gas temperature and pressure, the properties of the catalyst, the precursor gasses, and the effects of oxygen. We are using in situ measurements of CNT nucleation and growth to address this challenge; initially, we are using electron beam induced deposition for site-specific synthesis of catalyst particles that will be used to form CNTs at controlled locations, with the ultimate goal of enabling large scale synthesis of CNTs with a desired structure and morphology. 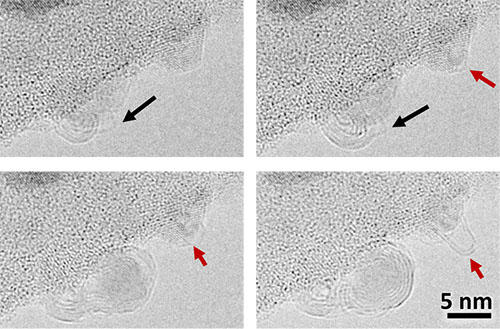 Time-resolved high resolution image sequence, recorded at 520 °C in 0.1 Pa of acetylene, showing the growth of a multi-walled carbon nanotube (marked by black arrow) and the nucleation and growth of double walled tubes (marked by red arrow) accompanied by reduction of nickel oxide particle to nickel metal.