The fundamental design premise of the Internet is that it comprises the ubiquitous interconnection of many independent networks, owned and autonomously operated by distinct administrative domains (network operators, enterprises, hosted service providers).   The Border Gateway Protocol (BGP) was developed in the late 1980s to exchange routing information and compute routes between the networks that make up the Internet.   Over time, BGP has evolved into the fundamental “glue” that interconnects the commercial Internet.

As the Internet has evolved, significant concerns have arisen about the security and robustness of the global BGP routing system.  These concerns fall into three broad categories:

The vulnerabilities of the BGP system are real and commonly observed in limited scale events [2]. It is fortunate that to date there haven’t been more focused and malicious attempts to exploit them.   Well documented events of increasing significance over the last decade have awakened the community to the real threat potential: 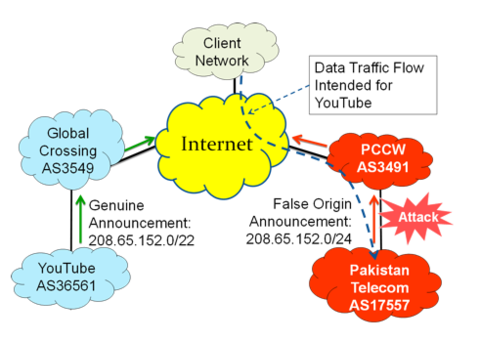 The most recent observed events confirm what has long been known in the research community: as originally designed and commercially deployed, the global BGP routing system has significant vulnerabilities.  If carefully exploited by malicious parties, BGP attacks are very difficult to detect, diagnose and mitigate, suggesting that many more exploits might be occurring that go unreported to the general community.  While the scale and duration of most attacks experienced to date have been limited, their impact on the global routing system indicates that broader, sustained attacks by a determined adversary might have catastrophic effects on the global Internet.

The systemic vulnerabilities of the global BGP routing system have been the subject of concern for at least the last decade [12] [13].   Significant effort has been devoted within the research community to design and evaluate numerous approaches to improving the security and robustness of the BGP routing system [14] [15].

In 2003, the National Strategy to Secure Cyberspace [16] identified the need to secure the BGP routing system as a USG priority.  In response, the DHS Science and Technology Directorate and the NIST Information Technology Laboratory initiated collaborative efforts [17] [18] to work with the

The combination of RPKI, BGP-OV, and BGP-PV provide a complete solution to the routing vulnerabilities identified above and are based upon a common and verifiable global trust infrastructure.   While there are other research and commercial approaches to some aspects of this problem (e.g., detecting hijacks [23]), no other approach provides a viable basis for a global mitigation strategy.

The adoption and use of RPKI data by network operators to actively filter spurious routes is harder to measure, but in general, is known to be lagging.  Questions remain to be answered about the robustness and manageability of emerging RPKI and BGP-OV products and services.   Other key barriers may not be strictly technical, as many ISPs and large enterprise users have questions about the economic, legal and policy issues that surround RPKI adoption and use.  More testing and subsequent guidance are necessary to assist major ISPs and enterprise networks to develop tactical adoption and operations plans and to initiate deployment to get beyond first-mover barriers in the industry. 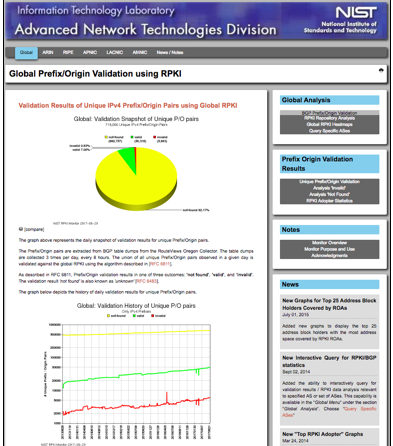 The base specifications for full BGP path validation are nearly complete [26].  Initial commercial and research prototypes are under development [27] [28].   Because BGP-PV requires cryptographic processing to be added to routers, there are questions in the community about the performance impact that might have on existing equipment. Further performance analysis and strategic planning is necessary for router vendors to ensure that future products have the capabilities (processing, storage) necessary to support full BGP-PV.

Each class of activity will be conducted on a relatively short time frame with significant contributions possible in a 1-2 year time frame.