Membranes and membrane technology are key to the nation’s water and energy security. Polymer-based membranes already play a significant role in fields such as water purification, fuel cells and batteries, where they control the selective transport of ions and/or water. The exact nature of ion and water transport is often ambiguous and depends on the complex interplay between polymer structure and dynamics that facilitate transport. To this end, we are developing and applying advanced measurement methods to quantify structure/property/transport in polymer-based membranes to address the grand challenge of the energy-water nexus.

We are developing and applying the following advanced tools to measure the structure, dynamics, and performance of polymer-based membranes: 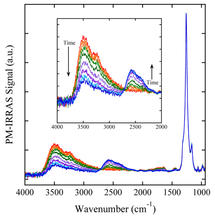 We employ polarization modulation infrared reflection absorption spectroscopy (PM-IRRAS) to study the functional group concentrations with thin membranes. One advantage of the PM-IRRAS technique is that it allows IR measurements to be conducted in humid environments, as only the water that is absorbed in the film is detectable (ambient moisture and carbon dioxide is suppressed).  This allows us to conduct IR measurements as a function of water content (i.e. swelling) within a membrane. 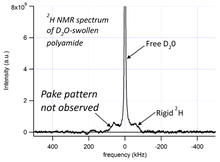 NMR is a powerful analytical tool for observing segmental dynamics in chain molecules as well as the rotational and translational diffusion processes of low molar mass solute molecules contained within functional polymers such as water filtration membranes and fuel cells. NMR relaxation and pulsed field gradient methods are utilized to study the types of motion that occur and are useful discriminating between models of dynamics in complex systems. We employ these NMR methods as well as lineshape analysis and exchange experiments to probe molecular dynamics on microsecond to second time scales.

We use electrochemical impedance spectrosocopy (EIS) to study the permselectivity of polyamide desalination membranes.  Measured impedance from EIS is modeled with equivalent electrical circuits whose resistive and capacitive elements provide insight into the solution-diffusion transport of salts in polyamide.  The goal of this work is to improve our understanding of how salt rejection and water permeation of polyamide films is affected by chemistry, network structure, and film thickness. 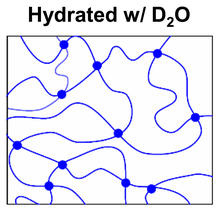 Neutron scattering can investigate both structure and dynamics of soft materials and membranes. When a neutron interacts with an atom within a sample, the scattering event can be elastic, inelastic or quasi-elastic. Elastically scattered neutrons yield useful information about the structure (i.e. spatial arrangement in space) of the membrane, whereas inelastic and quasi-elastically scattered neutrons yield information about the dynamics (i.e. how things move in space and time) within the membrane. By contrast matching, we can probe the structure and/or dynamics of the membrane, water, or both. 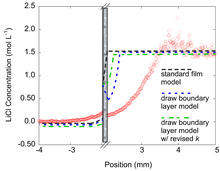 We employ cantilever bending to investigate the swelling-induced stresses in thin polymer membranes. Swelling of the membrane by water or other small molecules generates a stress within the film, causing the cantilever to bend. The bending can be tracked by reflecting a laser (or multiple lasers) off the cantilever onto a detector. By tracking both the swelling stress and swelling strain, this technique can be leveraged to investigate many important mechanical properties of thin membranes. 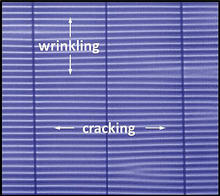 We developed a method based on surface wrinkling and cracking that allows measurement of the modulus and fracture of ultrathin membranes. In this approach, we adhere a thin membrane on a soft, elastomeric substrate and apply an increasing uniaxial tensile strain (ε). At relatively low strains, a critical point is reached where a periodic wrinkling pattern appears parallel to the applied strain with a well-defined wavelength (λ). As described previously and extensively investigated, this wavelength can be related to the elastic modulus or stiffness of the film. At higher strains, the film begins to crack orthogonal to the strain direction, showing multiple cracks with roughly equal spacing (d) that decreases with increasing strain. By monitoring the average crack spacing as a function of strain, we can deduce both the fracture strength and onset fracture strain of the film.