To process quantum information it is important to have amplifiers with wide bandwidth, high dynamic range, and low noise.

We have developed parametric amplifiers and frequency combs based on superconductors with high kinetic inductance, a representation of the kinetic energy of superconducting Cooper-pair charge carriers.

Signal gain due to periodic loadings in kinetic-inductance parametric amplifiers for quantum computing and photon detection - Parametric amplifiers are characterized by wide bandwidth, high dynamic range, and low noise, and are of particular use in quantum computing and photon detection. Traveling-wave parametric amplifiers may be fabricated from superconducting films that exhibit highly nonlinear kinetic inductance. We fabricated a coplanar waveguide of such a microwave device, more than a meter in length but compacted to reside on a chip on the order of one square centimeter. It was engineered with periodic width variations, or “loadings,” to alter the dispersion characteristics of a nonlinear current propagating along the waveguide, which changes its group velocity and modulation. A 16 GHz pump wave and a small signal injected into one end of the waveguide mix parametrically in the presence of the nonlinear kinetic inductance. The engineered dispersion induces favorable conditions of overall phase matching, leading to the generation of idler waves and signal amplification.

Our paper, “Theory of Multiwave Mixing Within the Superconducting Kinetic-Inductance Traveling-Wave Amplifier,” was selected as an “Editors’ Suggestion” by Physical Review B. In it, we present a theoretical framework in which signal gain may be calculated solely from the loading design. This required development of a meta-material band theory of the engineered dispersion, which was used as a basis to describe the mixing of nonlinear traveling waves. 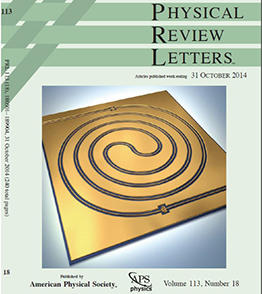 Development of superconducting, broad-band microwave frequency combs - Coherent optical frequency combs are a critical component in dividing down and translating frequency standards across multiple octaves. Typically these devices are made in the optical regime using high quality factor, nonlinear optical elements. We have succeeded in generating coherent frequency combs at microwave frequencies by exploiting the nonlinearity of the superconducting kinetic inductance. From a single pump we were able to generate multiple octaves of phase-locked frequencies in long coplanar waveguides. The waveguides were patterned as spirals to fit on a 2x2 cm chip, with lengths up to 5 meters long.