Celebrating the 100th Anniversary of the Discovery of Superconductivity 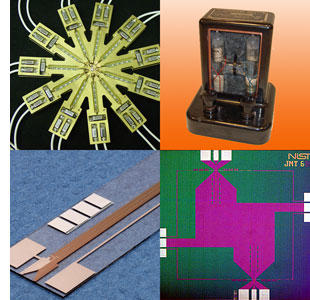 Over four decades, the National Institute of Standards and Technology (NIST)* has developed a series of voltage standards based on superconducting Josephson junctions. The standards are used worldwide by industry, government and military laboratories to calibrate voltmeters—common instruments for applications ranging from the electric power grid to consumer electronics to advanced military equipment. Every standard is based on quantum mechanics, which ensures that the voltage does not drift with time or due to environmental conditions. Many artifacts described below are on exhibit at NIST's Boulder, Colo., campus. Technology advances over the decades are evident in the materials and packaging, junction numbers and arrangements, and voltage magnitude and production methods.

* NIST was called the National Bureau of Standards until 1988.