Dr. Rowane received his BS and MS degrees both from Virginia Commonwealth University in chemical engineering and PhD from City, University of London in mechanical engineering. During his PhD, he served as a research fellow on a Marie Skłodowska-Curie innovative training network (ITN) called the IPPAD-ITN through employment with Afton Chemical. The overarching goal of the IPPAD project was to investigate the impact of high-pressure diesel injection, additives, and supercritical injection on both diesel engine performance and emissions. His contribution to the IPPAD-ITN was the development of several instruments to measure the viscosity, density, phase behavior, and interfacial tension of diesel fuels and mixtures of diesel fuels in the presence of nitrogen (as a surrogate for air) at extreme conditions encountered within modern diesel engines. The data reported in his thesis and resultant publications have been used to develop and test various thermodynamic and transport property models using the Perturbed-Chain Statistical Associating Fluid Theory (PC-SAFT) Equation of State (EoS) for neat diesel fuel and mixtures of diesel fuel with nitrogen.  Expanding on his experience Dr. Rowane’s current research interests involve the measurement and modeling of the phase behavior, density, and interfacial tension of bio-diesel + petro-diesel blends with nitrogen which are expected to be properties that influence combustion quality. Additionally, he is also working with Dr. Mark McLinden and Dr. Richard Perkins to measure the sound speed and thermal conductivity of various refrigerant mixtures.

Dr. Rowane has an interest in measuring the phase behavior of mixtures exhibiting vapor-liquid, liquid-liquid, and solid-liquid equilibria. As a PhD student he measured the phase behavior and densities for highly asymmetric mixtures of fuels and fuel components with nitrogen using a variable-volume view cell technique capable of measurements to temperatures and pressures as extreme as 530 K and 300 MPa. In brief, the variable-volume view cell technique involves loading a sample into high-pressure cell equipped with both a floating piston and a sapphire window. The floating piston is used to adjust the sample pressure while the sapphire window allows the user to visually monitor the sample. Varying the pressure at a fixed temperature enables the user to visually observe phase transitions. Repeating this procedure for several isopleths allows one to construct full phase diagrams of mixture systems. Density measurements in the single-phase region are accomplished with the addition of a linear variable differential transformer (LVDT) which is used to track the position of the floating piston. A relationship between the view cell internal volume and piston position can be derived using a calibration fluid for which the density is know precisely over a broad temperature-pressure space. The calibration procedure involves loading an accurate mass of the calibration fluid into the view cell. Given that both the fluid mass and density are known the internal cell volume can be calculated (volume = mass/density) at several at several LVDT readings. Finally, given that the mass any sample of interest is known accurately its density can be determined using the fundamental relationship for density (density = mass/volume). Dr. Rowane is currently working on replicating this technique at NIST to simultaneously measure the density and phase behavior of several bio-diesel surrogate + N2 mixtures. 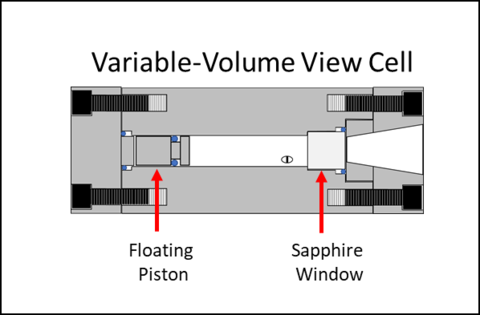 In addition to the phase behavior Dr. Rowane also has an interest in measuring the interfacial tension of mixture of fuel components with nitrogen which resemble those of fuel-air mixtures in internal combustion engines. Dr. Rowane is working to develop a pendant drop instrument to measure the interfacial tension at temperatures and pressure resembling those within diesel engine combustion chambers.