Detecting greenhouse gases in the atmosphere could soon become far easier with the help of an innovative technique* developed by a team at the National Institute of Standards and Technology (NIST), where scientists have overcome an issue preventing the effective use of lasers to rapidly scan samples. 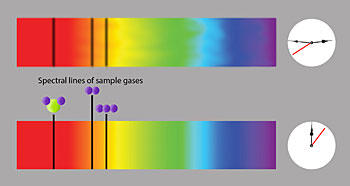 The team, which recently published its findings in the journal Nature Photonics, says the technique also could work for other jobs that require gas detection, including the search for hidden explosives and monitoring chemical processes in industry and the environment.

Searching for faint whiffs of an unusual gas mixed in the air is called "trace gas sensing." By far, the most common method is spectroscopy—identifying gas molecules by the unique set of frequencies of light that each absorbs. The telltale pattern of dark lines in a spectrum indicates which gases are present in the mix. Accurately measuring the concentrations of relatively low-concentration gases, however, requires a lot of light, generated by a laser that can be tuned to different colors. Until now, tuning a laser to shine in a wide enough range of colors typically has required a mechanical device to change the frequency, but all the available methods adjust the laser too slowly to obtain meaningful snapshots of the turbulent atmosphere.

"One of the major goals in climate science is to combine a wide variety of high-accuracy atmospheric measurements, including ground-based, aircraft and satellite missions, in order to fully understand the carbon cycle," says the research team's David Long, a scientist in NIST's Chemical Sciences Division. "The technology we've developed is general enough to be applicable for each of these platforms. The high speed of the technique allows for very accurate measurements of atmospheric gases at rates which are faster than atmospheric changes in temperature and pressure due to turbulence."

The team found a solution using electronics that permit fast and discrete changes in frequency. The components—called an electro-optic modulator and an optical resonator—work together to alter the laser so that its light shines in a number of different frequencies, and then to filter these frequencies so that the laser only shines in one color at any given instant. The new method allows a wide range of different frequencies to pass through a gas sample in a few milliseconds or less, with the added benefit of providing a clearer and more accurate resulting spectrum than the previous "slow scan" methods could.

Long says that the Nature Photonics paper details the use of the technique in a controlled laboratory environment using a small sample chamber for ground-based measurements, but that the team has submitted other papers with data indicating the technique also could work at great distances—potentially allowing a scanner to be mounted on a vehicle, an aircraft or a satellite. The team also has applied for a patent on its work, he says.