CHARLESTON, S.C.—Major factors contributing to a rapid spread of fire at the Sofa Super Store in Charleston, S.C., on June 18, 2007, included large open spaces with furniture providing high fuel loads, the inward rush of air following the breaking of windows and a lack of sprinklers, according to a draft report released for public comment today by the U.S. Commerce Department's National Institute of Standards and Technology (NIST). The fire trapped and killed nine firefighters, the highest number of firefighter fatalities in a single event since 9/11.

Based on its findings, the NIST technical study team made 11 recommendations for enhancing building, occupant and firefighter safety nationwide. In particular, the team urged state and local communities to adopt and strictly adhere to current national model building and fire safety codes.1 If today's model codes had been in place and rigorously followed in Charleston in 2007, the study authors said, the conditions that led to the rapid fire spread in the Sofa Super Store probably would have been prevented.

Specifically, the NIST report calls for national model building and fire codes to require sprinklers for all new commercial retail furniture stores regardless of size, and for existing retail furniture stores with any single display area of greater than 190 square meters (2,000 square feet). Other recommendations include adopting model codes that cover high fuel load situations (such as a furniture store), ensuring proper fire inspections and building plan examinations, and encouraging research for a better understanding of fire situations such as venting of smoke from burning buildings and the spread of fire on furniture.

Using a state-of-the-art computer model to simulate the fire, the study team found that the addition of automatic sprinklers inside the loading dock could have significantly slowed the fire (which began just outside the dock area), prevented it from spreading beyond the dock, and eventually, extinguished it completely. The model also showed that sprinklers on the loading dock likely would have maintained what firefighters call tenability conditions, the ability for individuals in a fire event to escape unassisted.

Factors identified as contributing to the fire's progress include: (1) the high fuel loads—especially furniture—present throughout the building; (2) the lack of sprinklers throughout the Sofa Super Store; (3) the open floor plan of the facility; (4) the hidden build-up of combustible smoke and gases in the area between the drop ceiling and the roof of the main showroom; (5) the non-fire-activated roll-up door that was open between the loading dock and the holding area; (6) the four fire-activated roll-up doors (out of seven) that activated but did not close during the fire; (7) the metal walls in the warehouse and west showroom that allowed heat from the fire to ignite items next to the walls; and (8) the breaking of windows at the front of the store that supplied air to the fire.

NIST's team of experts traveled to Charleston to gather data within 36 hours of the Sofa Super Store fire. Using these data and other information collected in the following months (such as building design documents, records, plans, video and photographic data, radio transmissions, interviews with emergency responders, and informal discussions with store employees), the NIST study team developed its computer model to simulate and analyze the characteristics of the fire, including fire spread, smoke movement, tenability, and the operation of active and passive fire protection systems.

Based on their model and the data collected, the NIST researchers determined the following sequence of events on June 18, 2007, at the Sofa Super Store:

Once the final report is published, NIST will work with the appropriate committees of the International Code Council (ICC) on using the study's recommendations to improve provisions in model building and fire codes. NIST also will work with the major organizations representing state and local governments—including building and fire officials—and firefighters to encourage them to seriously consider its recommendations.

NIST has more than 40 years of experience conducting building and fire safety studies and researching the aftermath of disasters and failures. By understanding the technical causes for such incidents and making the information available to the public, NIST scientists and engineers strive to improve the safety of buildings, their occupants and emergency responders. NIST's technical building failure and fire studies do not address fault.

As a non-regulatory agency of the U.S. Department of Commerce, NIST promotes U.S. innovation and industrial competitiveness by advancing measurement science, standards and technology in ways that enhance economic security and improve our quality of life.

1The International Code Council (ICC) I-Codes are used as models for building and fire regulations promulgated and enforced by U.S. state and local jurisdictions. Those jurisdictions have the option of incorporating some or all of the code's provisions but generally adopt most provisions. 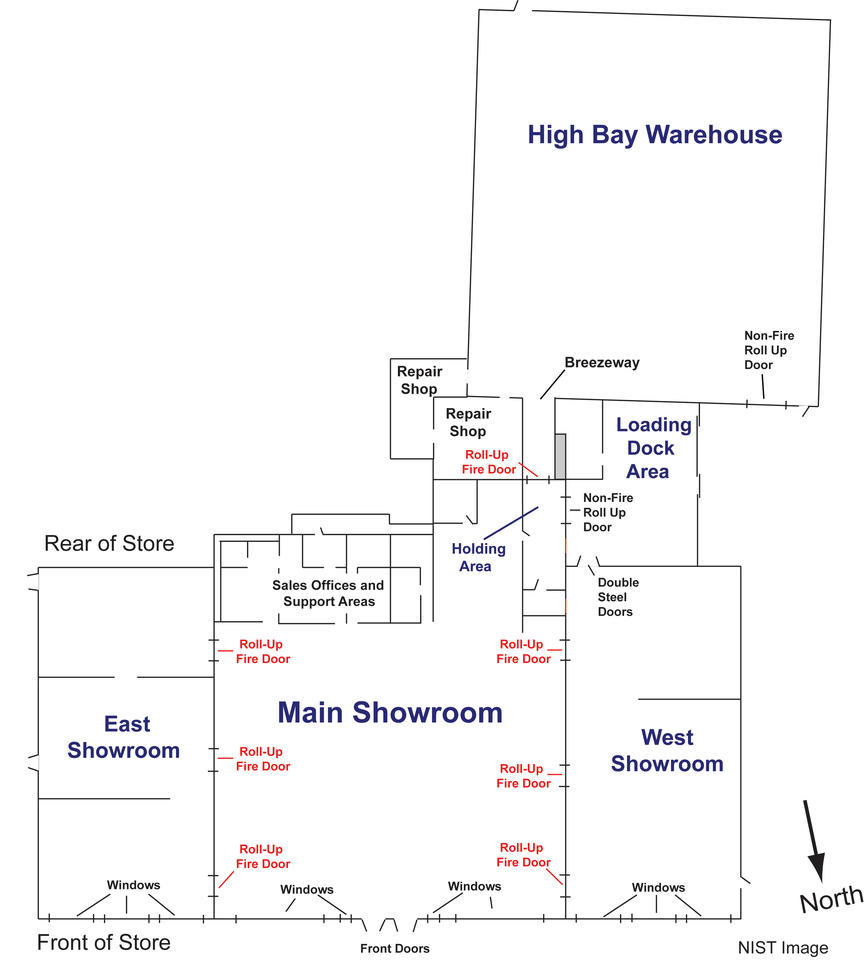 Smoke and Fire Movement at Six Points During Charleston Fire 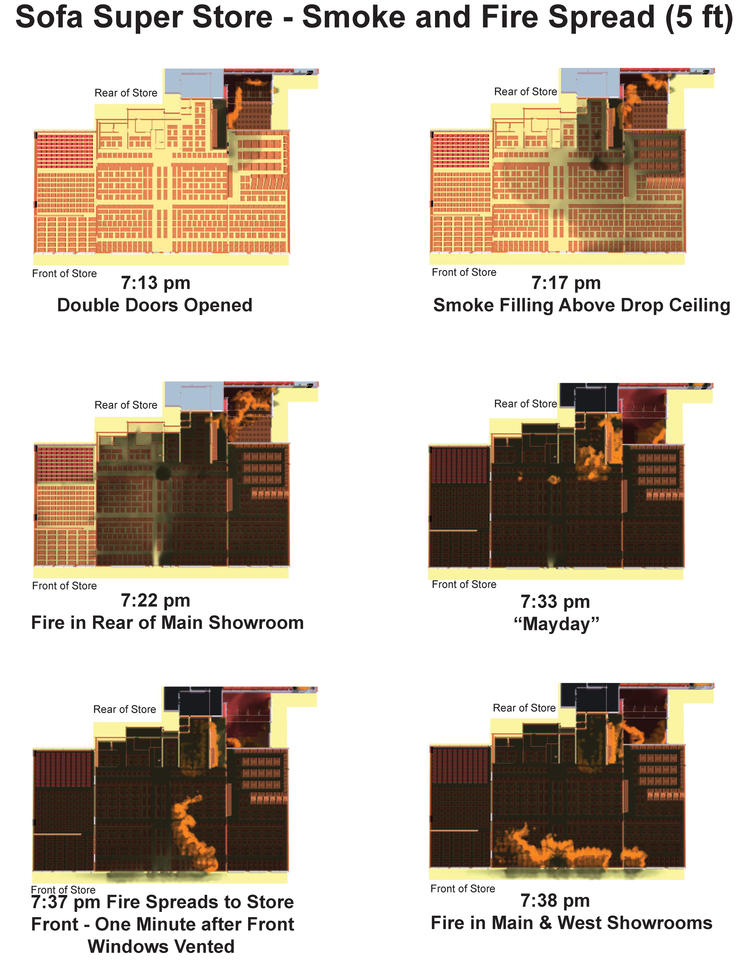 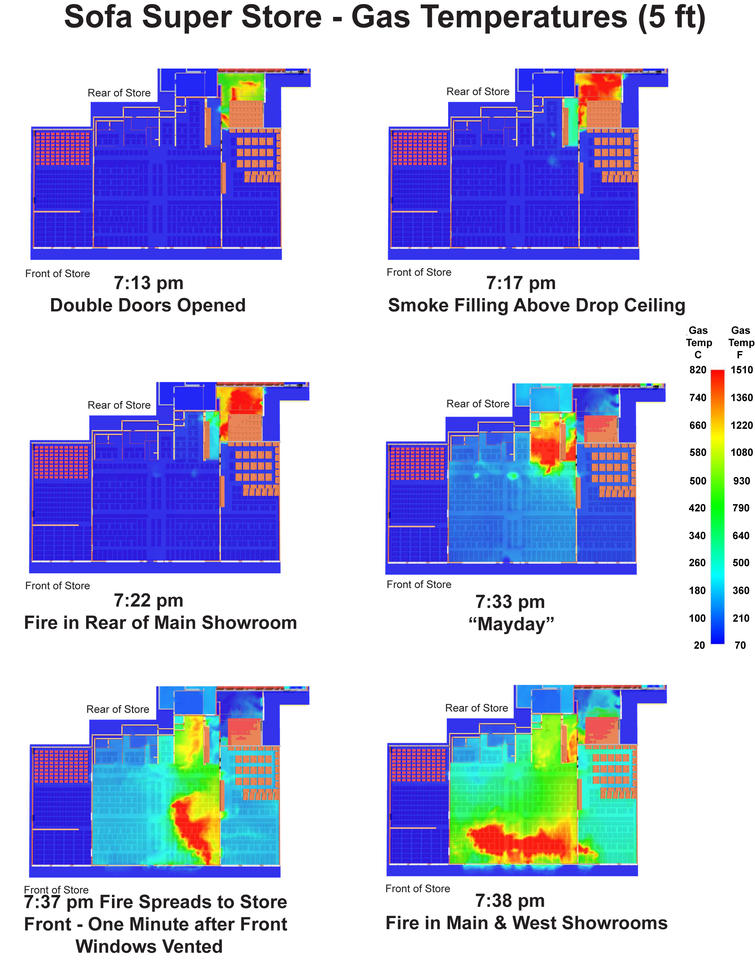 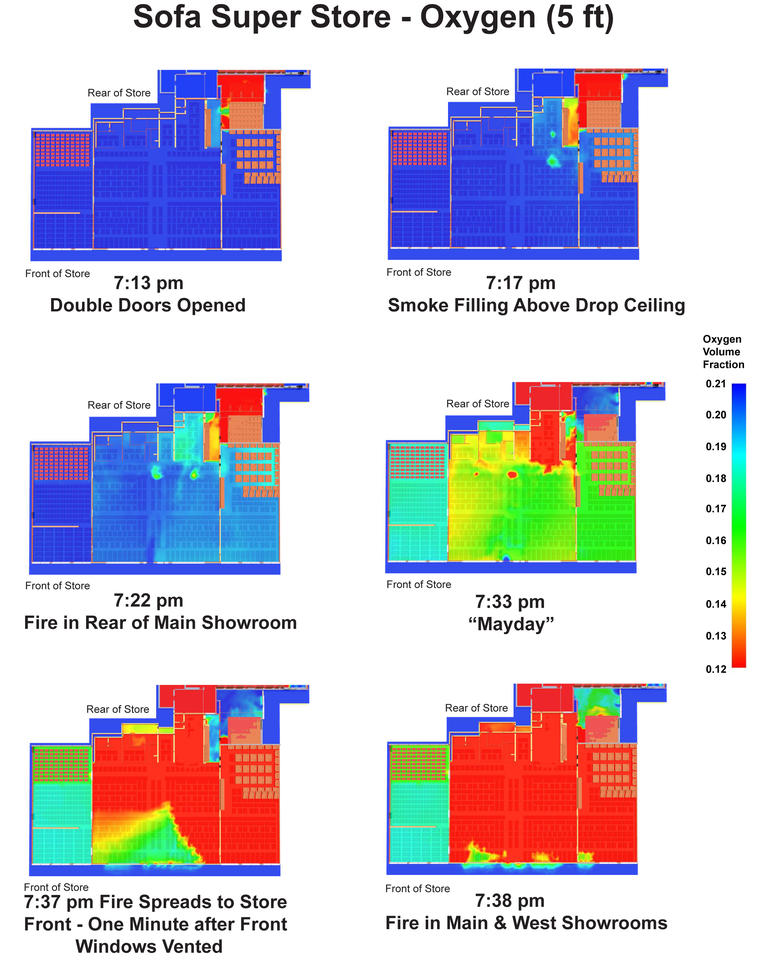 1. High Fuel-Load Mercantile Occupancies: NIST recommends that, at a minimum, all state and local jurisdictions adopt a building and fire code based upon one of the model codes, covering new and existing high fuel-load mercantile occupancies, and update local codes as the model codes are revised.

a) all aspects of the building and fire codes;
b) adequate documentation of building permits and alterations;
c) the means of inspecting fire protection systems and detailing record keeping;
d) the frequency and rigor of fire inspections, including follow-up and auditing procedures; and
e) guidelines for remedial requirements when inspections identify deviations from code provisions.

a) identify low, medium, and high hazard occupancies;
b) allocate resources according to risk identified; and
c) develop operating procedures that respond to specific risks.

a) develop guidelines as to how and when ventilation should be implemented during a fire; and
b) provide training to fire fighters on different types of ventilation—vertical, horizontal and positive-pressure—and integrate into daily operations on the fire ground.

7.  Research on Upholstered Furniture Flame Spread: NIST recommends that research be conducted to better understand ignition and fire spread on upholstered furniture in order to provide the tools needed by design professionals to improve the fire performance of furniture. The specific areas requiring research are:

a) prediction of ignition of natural and synthetic coverings for current furniture, wall, ceiling and floor lining materials, and room furnishings;
b) prediction of fire spread over actual furniture with and without fire barriers, fire retardants and fire resistive materials; and
c) quantification of smoke and toxic gas production in realistic room fires.

8.  Research on Improving Fire Barriers: NIST recommends that research be conducted to provide the tools needed by design professionals to improve the performance of compartmentalization. The specific areas requiring research are:

9.  Research on Decision Aids for Allocation of Resources: NIST recommends that research be conducted to:

a) refine computer-aided decision tools for determining the costs and benefits of alternative code changes and fire safety technologies; and
b) develop computer models to assist communities in allocating resources (money and staff) to ensure that their response to an emergency with a large number of potential casualties is effective.

10.  Research on Ventilation of Burning Structures: NIST recommends that additional research be conducted to:

a) improve characterization of how ventilation affects the growth and spread of fire within structures; and
b) provide the fire service with guidance on when and how to use ventilation to improve the fire environment during fire service operations.

11.  Research on Performance Metrics for Fire Protection: NIST recommends that research be conducted to:

a) develop performance and effectiveness metrics for community fire protection;
b) survey effectiveness of existing fire services; and
c) use metrics to optimize development of new technologies.