The Organization of Scientific Area Committees for Forensic Science 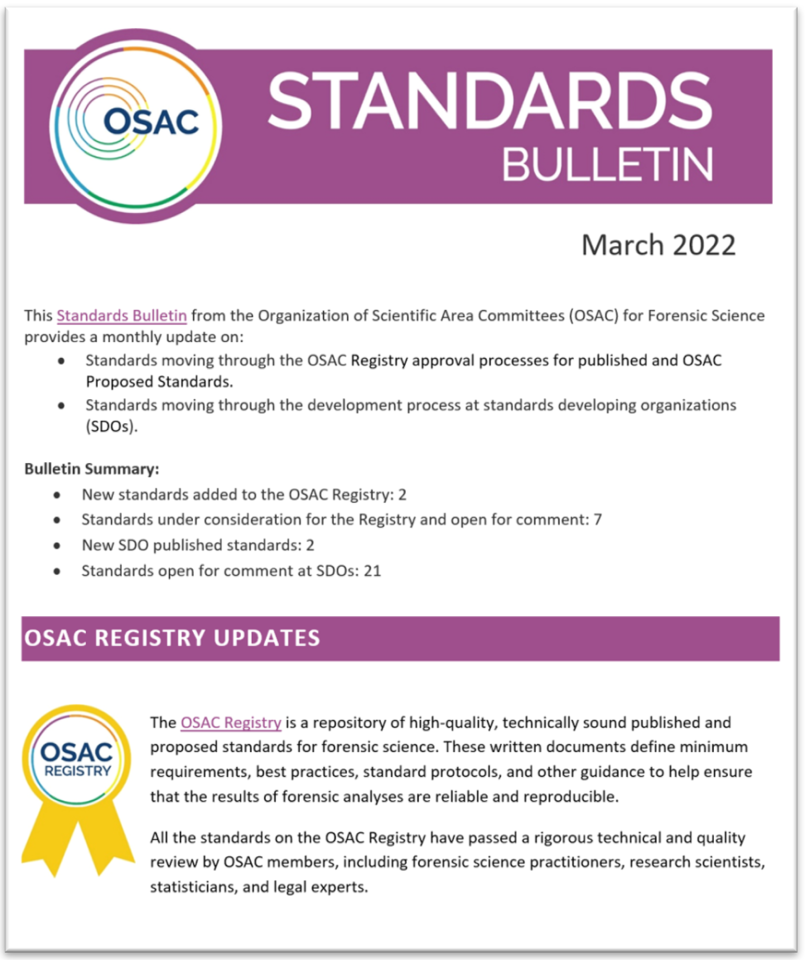 This Standards Bulletin from the Organization of Scientific Area Committees (OSAC) for Forensic Science provides a monthly update on:

The OSAC Registry is a repository of high-quality, technically sound published and proposed standards for forensic science. These written documents define minimum requirements, best practices, standard protocols, and other guidance to help ensure that the results of forensic analyses are reliable and reproducible.

All the standards on the OSAC Registry have passed a rigorous technical and quality review by OSAC members, including forensic science practitioners, research scientists, statisticians, and legal experts.

The OSAC Registry approval process for OSAC Proposed Standards is used to review OSAC drafted standards for technical quality and placement on the Registry. The following OSAC draft proposed standards are being considered for submission to an SDO. The final draft provided to the SDO will be available on the OSAC Registry as an “OSAC Proposed Standard.”

OSAC welcomes comments on whether the current draft is suitable for release to the SDO as well as suggestions for improvements in content and wording. To be considered, comments must be placed in the OSAC Comment Form and sent to comments [at] nist.gov by 11:59 p.m. ET on April 4, 2022.

NOTE: OSAC RESOURCE TASK GROUP (RTG) MEMBERS ARE ENCOURAGED TO COMMENT ON THESE STANDARDS BY DOWNLOADING THE RTG COMMENT TABLE AND SUBMITTING IT TO comments [at] nist.gov IN ACCORDANCE WITH THE REGISTRY APPROVAL PROCESS.

Visit the OSAC website to see all the standards under consideration for the OSAC Registry, along with their status in the Registry approval process.

Is your organization implementing standards on the OSAC Registry?

Complete OSAC's Registry Implementation Declaration Form found on the OSAC website and send it to mark.stolorow [at] nist.gov to let us know. Your organization will subsequently be awarded an OSAC Registry Implementer Certificate.

The Academy Standards Board (ASB) published the following two standards in February 2022:

Stakeholders from the forensic science community are encouraged to provide input on standards as they are being developed at SDOs. For SDO published standards going through the OSAC Registry approval process, the public will have an opportunity to comment on a standard during the SDO’s public comment period but will not be given a second opportunity to comment through OSAC on whether the resulting standard should be placed on the Registry.

Visit OSAC’s Standards Open for Comment webpage to see the full list of forensic science standards open for comment at SDOs and how to submit your feedback. This page consolidates and tracks comment deadlines for you and will be updated on a weekly basis. It currently includes:

A report providing a detailed look at the survey respondents and the implementation status of 46 standards represented in OSAC’s first annual Registry Implementation Survey is now available. OSAC released this survey in the summer of 2021 to better understand how the standards on the OSAC Registry are being used, the challenges around standards implementation, and what support is needed to improve it.

Center for Statistics and Applications in Forensic Evidence

National Institute of Standards and Technology

NIST has published Results from a Black-Box Study for Digital Forensic Examiners. The goal of this study was to assess the performance of the digital forensic community as a whole. For the study, experts from the digital forensic community examined and reported on simulated digital evidence from casework-like scenarios. The newly published document describes the methodology used in the study and summarizes the results.