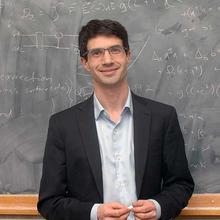 Fascinated with astrophysics while an undergraduate at Harvard, Taylor began his research career examining rarified gases and stellar clusters. A one-year position at the University of Tokyo as a Luce Scholar introduced him to special-purpose computing, and in graduate school he returned to join Misha Lukin's effort to advance quantum information science. In 2006, he moved to MIT as a Pappalardo Fellow, before starting his research group at NIST, and joining the JQI, in 2009. Four years ago, he co-founded QuICS --- a joint governmental-academic effort --- with University of Maryland distinguished university professor Dianne O'Leary, to connect computer scientists and physicists working on the fundamental challenge of realizing and understanding quantum coherent devices. A Fellow of the American Physical Society, Taylor is also the recipient of the Department of Commerce Silver Medal, the IUPAP C15 Young Scientist Award, the Samuel J. Heyman Service to America Medal: Call to Service, the Presidential Early Career Award for Science and Engineering, and the Newcomb Cleveland prize of the AAAS. He has published more than 100 scientific papers, several book chapters, and holds five patents in quantum technologies.