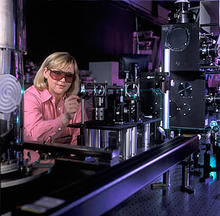 Credit: ©Robert Rathe
The Administration is committed to moving the Nation from recession to recovery by sparking job creation to get millions of Americans back to work and building a new foundation for the long-term prosperity for all American families. To do this, the 2011 Budget makes critical investments in the key areas that will improve the lives of every American as innovations diffuse and scale throughout the economy, leading to breakthroughs in health, clean energy, infrastructure, and much more.

The President's FY 2011 budget request for the Commerce Department's National Institute of Standards and Technology (NIST) proposes a funding level of $918.9 million, a 7.3 percent increase over the FY 2010 appropriations for the agency.

"The President's request for NIST recognizes the critical role that measurement science and standards play in fostering innovation and economic growth," said NIST Director Patrick Gallagher. "The budget also maintains the President's commitment to double the NIST laboratory budget by 2017 to support and enhance our world leadership in the physical sciences and technology."