The National Institute of Standards and Technology’s Communications Technology Laboratory (NIST CTL) was established in 2014 to unite NIST’s many wireless communications efforts into a unified research and development organization. Through metrology and research in physical phenomena, materials capabilities and complex high-speed communications systems, we are establishing the technological basis upon which the ongoing wireless revolution depends.

NIST CTL may be a young lab, but our track record in wireless research harks back more than a century: researchers from NIST-predecessor the National Bureau of Standards (NBS) were doing radiofrequency measurements as early as 1911. Our radio science was critical to the operation of U.S. aircraft, communications and missiles during World War II. In 1954, President Dwight D. Eisenhower dedicated what’s now known as NIST Boulder Laboratories as NBS’s Central Radio Propagation Laboratory, a national research center for radio physics and radio engineering measurements, metrology and standards development. 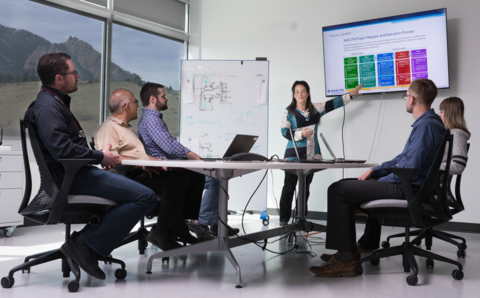 With expertise honed over decades of research in antennas and wireless propagation, materials science and electronics testing, as well as communications network protocols and standards, CTL serves as an independent, unbiased arbiter of trusted measurements and standards to government and industry. We focus on developing precision instrumentation and creating test protocols, models and simulation tools to enable a range of emerging wireless technologies. Driving much of our work is a spectrum crunch in historically coveted wireless bandwidths. Without a new generation of extremely high-speed, sophisticated wireless systems whose capabilities and limits we’re only beginning to understand, the spectrum crunch threatens to dampen the potential of wireless data applications as diverse as mobile video, wearable devices, and smart vehicles.

In addition, CTL is home to the National Advanced Spectrum and Communications Test Network (NASCTN). NASCTN provides a neutral forum for addressing spectrum-sharing challenges. NASCTN brings together participants from other federal agencies, including U.S. Department of Defense, the National Oceanic and Atmospheric Administration (NOAA), the National Science Foundation (NSF), and the National Telecommunications and Information Administration (NTIA) to develop robust test processes and validated measurement data necessary to develop, evaluate and deploy spectrum sharing technologies that can increase access to the spectrum by both Federal agencies and non-federal spectrum users.

Most of our work happens in four major programs:

Individually, our researchers characterize as well as develop highly specialized technologies to overcome wireless communication challenges facing government and industry. Together, they’re building the foundations for the wireless networks of the future.