The Long Road from Nobelists' Invention to LongPath Technologies

On October 23, 2015, workers discovered a massive natural-gas leak at California’s Aliso Canyon storage facility in Los Angeles County. Over the course of the next several months, the storage facility leaked approximately 100,000 tons of odorized natural gas into nearby neighborhoods, sickening and displacing thousands of people. The cleanup that followed cost the owners of the storage facility more than $1 billion, and the California state legislature sought to prevent future occurrences by passing regulations that required storage facility operators to check wellheads every day for leaks. Natural-gas leakage from production and transmission infrastructure across the U.S. results in multiple accidents annually and has caused friction between neighboring communities and the oil and gas industry, which has surged domestically since 2007.

LongPath Technologies Inc. was born out of an urgent need to find low-cost solutions to monitor the vast oil and gas infrastructure across the U.S. Our idea was to develop a system akin to a radar for methane, the main component of natural gas. Our system would deploy a single, centralized laser sensor that sends invisible, eye-safe beams over a sparse pattern of kilometer-long paths to detect, locate and size methane leaks among dense oil and gas infrastructure components. We’ve now made this idea a reality using the laser frequency comb, whose invention led to the Nobel Prize for Theodore Hӓnsch of Germany and John Hall of JILA, the joint institute of NIST and the University of Colorado Boulder.

In fact, the road to LongPath Technologies began around the time I was graduating from high school here in Colorado. It was 1999 and Jan Hall and his fellow researchers at JILA demonstrated their laser frequency comb. With careful stabilization of the system, they were able to create a laser output that comprised hundreds of thousands of individual, narrowly spaced wavelengths of light. Using a combination of nonlinear optics and electronic feedback, they could control the exact wavelength of every so-called comb tooth, opening a large realm of applications from precision timing to sensing.

But from a sensing standpoint, there was still much work to be done. In 2004, NIST researcher Nate Newbury, my eventual postdoc adviser, and fellow researchers developed the first optical fiber-based frequency comb. This was a critical step toward developing practical frequency comb technology. It took advantage of the robust, low-cost optical fiber technology coming out of the telecommunications industry and shifted the wavelength of frequency combs to the infrared where methane and other atmospheric gases absorb light. In principle, one could send the laser light through a sample containing these gases, and the specific absorption fingerprint, that is, the specific wavelengths that are uniquely absorbed by each molecule, could be detected.

There was a problem, however. One needed to be able to detect the absorption on each comb tooth to recover the fingerprint. Not an easy task when you are dealing with hundreds of thousands of comb teeth. Fortunately, in 2005, NIST researcher Ian Coddington, together with Nate, pioneered high signal-to-noise ratio dual-comb spectroscopy. This is where you combine waves of light from two carefully controlled frequency combs to convert the absorption information carried by the combs down to lower frequencies that common electronics can read out. In the years that followed, Nate and Ian’s group performed many successful forays into various applications of dual-comb spectroscopy.

In 2012, after my years as an engineering graduate student working on laser-based sensing in harsh, fire environments, I joined the group as an NRC research associate. I’m not entirely sure that Ian and Nate realized that I was a mechanical engineer until it was too late. Though not obvious at first (I often had to write down the foreign terminology being used during meetings and educate myself after work), it turned out that meshing my engineering and practical laser-sensing background with the physics expertise of the lab made for a powerful combination.

I began to try using dual-comb spectroscopy as a sensor for measuring chemical concentrations, temperature and other parameters along the laser path. At first, the plan was to build a small combustor at NIST and use the frequency combs to measure chemical concentrations and temperature in the turbulent combustion environment, until I understood the true challenge of suggesting that we burn something inside the laboratory! Instead, we decided to find an alternative turbulent test environment, and we sent the laser light out the window and over 1 kilometer through the air to see if we could measure trace gases in the atmosphere.

It wasn’t obvious that this would work, so I distinctly remember being in the lab at about 11 p.m. (when the turbulence across the atmosphere is relatively calm), and in the return laser signal I could see the distinct dips that looked like the carbon dioxide (CO2) absorption spectrum. It was at this moment that I knew we were on to something.

It would be more than a year of additional careful work before we published a paper in Optica on three days of very stable, precise time-resolved measurements of atmospheric gas concentrations and temperature over the long path. And the timing was perfect. I was just finishing my first year as a professor at the University of Colorado, and a Department of Energy Advanced Research Projects Agency (ARPA-E) funding call went out seeking low-cost pathways to monitoring methane leaks from oil and gas infrastructure. We combined the work that we were doing with open-path sensing together with ruggedized comb designs from Laura Sinclair and Ian at NIST and large-scale turbulent flow simulations from Kuldeep Prasad at NIST to respond to the call. Then, it was off to the races, both in terms of developing the technology for long-distance leak detection and leading my first multimillion-dollar project.

What ensued was a tremendous collaboration between my group of engineers at the University of Colorado and Nate and Ian’s group of physicists at NIST to develop a truly robust, portable dual frequency comb spectrometer. The picture below shows the original spectrometer that was used for the first atmospheric measurements (left). Next to it is the system that we now operate regularly in the field. 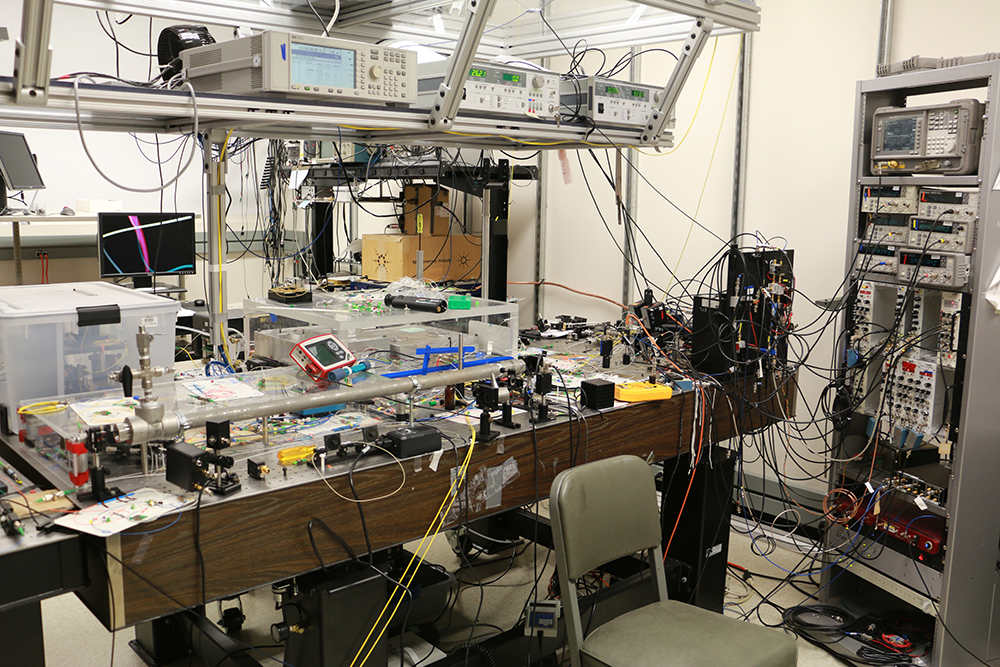 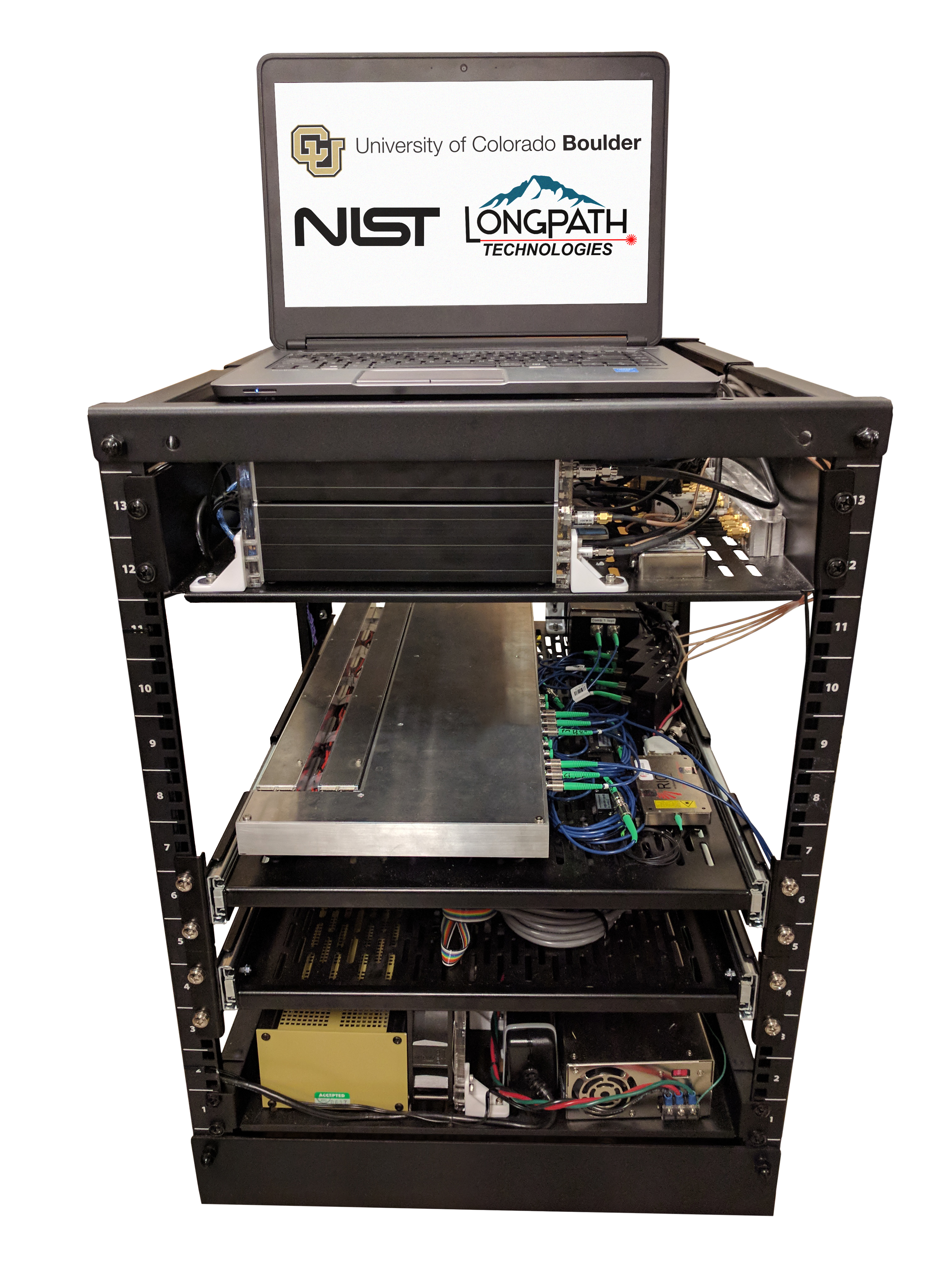 At the close of the second year of the project, it became obvious to the team that one, the technology was performing well, in fact, even better than we projected in the original proposal; and two, that there was true commercial potential for methane leak detection systems. Colorado was the first state to develop methane emissions regulations for oil and gas infrastructure and, more recently, to consider a continuous monitoring requirement. These rules reflect the tenuous situation that we see along the front range of Colorado, where the economic benefits of oil and gas development in the Denver-Julesburg basin are pitted against the desire for safety and clean air for the many growing communities living nearby.

We decided to form a company to see this technology all the way to the stage of societal impact. It has been a tremendous experience. We’ve been joined by CEO Andy Goldstein, a seasoned entrepreneur from the Boulder area, and we now have six employees. We’ve formed three partnerships with oil and gas companies in the upstream and midstream sectors and one partnership with a Canadian oil and gas research institute. We’re working with NIST and the University of Colorado to license the important chain of intellectual property that has been formed along the way.

Naming the company wasn’t easy, but we finally came up with LongPath Technologies, both to represent the long laser beam paths that are characteristic of our system, and the long road that the team and technology have traveled to get here. Every day gives us a new challenge, but through the incredible amalgamation of engineers, scientists and now businesspeople that we’ve formed around this problem, we instead see each challenge as an opportunity.

Federally funded R&D has resulted in more than $1 trillion in economic growth and created millions of new jobs since 1996. This is just one example of how the federal technology transfer system is enabling the birth of new businesses that serve critical needs. See NIST's new green paper, the Return on Investment Initiative for more on NIST's efforts to modernize and improve this important source of economic growth.

Greg Rieker is Vogel Family Faculty Fellow in Mechanical Engineering at the University of Colorado Boulder, and Chief Technology Officer of LongPath Technologies, Inc.  He earned his B.S. in...

great idea for Great future , thank you for this opportunity

If you have any questions about our blog, please contact us at takingmeasure [at] nist.gov.