Back to Event Page 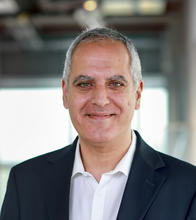 David is a seasoned sales and marketing executive with a track record of fast revenue growth and significantly increasing shareholder value. David serves as Karamba Security’s VP Sales and Marketing, responsible to achieve the company’s sales, demand creation goals and market branding. Prior to Karamba Security, David served as VP Marketing at Mellanox (MLNX) enabling revenue growth from $260M to $500M. David joined Mellanox after its acquisition of Voltaire (VOLT), where he was VP Software; managing software sales from $0.5M to $6.5M, out of the company’s total $70M revenues, in one year. Prior to that David was VP BD at Mercury Interactive (MERQ), signing AT&T, GTE, Qwest and Digital Island, as private labelers for Mercury’s SaaS offering. David joined Mercury, after it acquired his first company, Conduct, yielding returns of 17X and 6X to his investors. Before Conduct, David started as a sales manager and ended running sales at Sun Microsystems’ distributor in Israel, bringing it to be the largest UNIX company in Israel by revenues ($35M) and by market share (42%). Before that David was a software engineer at Amdocs (NYSE: DOX). David has earned a BA in Computer Science from the Technion, Israel Institute of Technology.

Jasyn Voshell is currently the Director Products and Solutions Security where he has enterprise responsibility for the global Product & Solutions Security Program including strategy, planning and execution. He owns the overarching program and partners with the Product & Solutions engineering teams to ensure security is integrated into relevant products and solutions. Jasyn has more than 15 years of experience within the security industry, has earned numerous security and audit certifications and has a track record of building high-performance teams throughout the organization. With more than 11 years at Zebra, Jasyn has a track record of building high-performance teams throughout the organization, including the Western SE channel organization and the NA wireless and security sales engineering team.  Before joining Zebra, Jasyn held security and internal audit positions at both Textron and Lockheed Martin.  Jasyn holds bachelor’s degrees in mathematics and physics, a master’s in applied mathematics and computer information systems, and a doctorate in civil law.