There are two projects: The electronic milligram; and NIST-on-a-chip optomechanical methods for calibration of mass, force, laser power and other quantities.

Project 1: The electronic milligram. As a result of the impending redefinition of mass within the SI, it may be possible to realize mass at the milligram level and below using electrical measurements. To this end, the NIST Electrostatic Force Balance (EFB) has been used to measure the mass of artifacts spanning the range from 50 micrograms to 20 milligrams. The measurement precision of the EFB methods result in 1 to 2 orders of magnitude less uncertainty in mass than subdividing the kilogram within this range. The EFB can also be used to calibrate other small force sensors, such as those used in Atomic Force Microscopy (AFM), and several different international comparisons have been undertaken to validate the EFB for this purpose.

Project 2: NIST-on-a-chip optomechanical methods for calibration of mass, force, laser power and other quantities. We have developed miniaturized self-calibrating sensors capable of interconverting mass, force and laser power using frequency measurements based on photon pressure forces. The goal of this project is to create an embedded reference for these types of measurements to simplify the calibration process for industry, and to examine whether a laser power or attonewton force standard can be developed from a discrete number of countable photons. 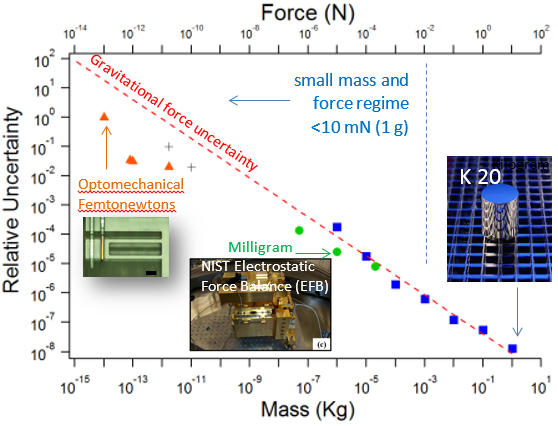