Our objective is to evaluate mechanisms of fatigue in bulk silicon, a material that has been traditionally considered to be immune to degradation of mechanical properties in cyclic loading. On the other hand, small-scale devices, such as Si microelectromechanical systems (MEMS), are known to fail after prolonged operation due to fatigue — susceptibility to fatigue is lifetime-limiting. The results of this project will have far-reaching implications concerning the reliability of silicon in applications subject to periodic mechanical stresses. 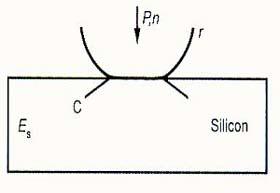 It has long been thought that bulk silicon is immune to fatigue. We present contrary evidence by demonstrating severe fatigue in macroscale specimens. Cracks are produced during cyclic loading of monocrystalline silicon plates with a 3 mm radius sphere indenter mounted onto a universal testing machine. Deformation and fracture accumulation is observed over 1 million cycles at 10 Hz. Field emission scanning electron microscopy (FESEM) is used to examine the surface morphology of the indented plates, and thus to ascertain the extent of fatigue damage. Atomic force microscopy (AFM) and Raman imaging are used to examine fine detail in the surface profilometry and the existence of any phase transformations in the contact zone. Sample preparation by focused ion beam (FIB) milling provides a means for obtaining sections through the contact damage zones to obtain subsurface views. A flexural testing protocol is used to determine the strength of indented silicon. By testing in air and other environments, we can investigate the potential role of environmental species on strength degradation.

Using mechanical testing methods, we have been able to demonstrate the existence of strong fatigue effects in silicon. A single indentation contact on a silicon plate at loads below 550 N produces no detectable surface damage. However, contacts at the same position at loads as low as 250 N produce measurable damage after prolonged cycling. At first, after about 103 cycles, a single ring crack appears. After about 5 x 103 cycles, debris begins to appear at the crack traces on the top surface. On further cycling to 2 x 104 cycles, damage spreads and material is spalled from outside the contact zone.

FESEM images of plate and particulate ejection from crack interface. Platelets and particles are about 1 µm to 5 µm in size.

The accumulation of fatigue damage is palpable after several thousand cycles, as is shown in the figures. Platelets and particles are progressively ejected from the crack interfaces, somewhat reminiscent of tectonic plates. Cracking and material ejection intensify with the number of cycles. With continued loading, particles becomes crushed and smeared outside the contact zone. Raman imaging (not shown) reveals that the smeared particles have been amorphized and transformed into other phases of silicon. Samples prepared by FIB milling exhibit a multiplicity and linking of cracking beneath the silicon surface, leading to material ejection. 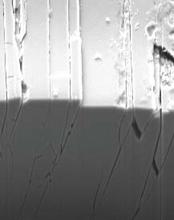 Such observations have not been reported before because most testing has been conducted using tensile specimens that are not subject to the kind of complex stress fields experienced here. However, most loading situations in real devices will be much closer to contact fields rather than to idealized tensile loading. This begs the question: what is the mechanism of fatigue? We argue that is arises from shear stresses acting on the cracks during contraction and expansion of the contact circle. This gives rise to frictional sliding at the crack walls, dislodging debris and ejecting slabs of material onto the silicon surface. The damage expands with continued cycling, leading to progressive degradation of the surface. Flexural tests on indented plates reveal a precipitous loss of strength once cracking begins, regardless of whether the tests are conducted in air or water.

The results have implications concerning the way that silicon-based devices may fail. The evidence here suggests that the source of such failure will be intrinisically mechanical rather than chemical in nature.