The NIST Neutron Imaging Facility (NNIF) at the NIST Center for Neutron Research.

The NIST Neutron Imaging Facility (NNIF) at the NIST Center for Neutron Research (see photograph) is one of the most advanced neutron imaging facilities in the world and it is the best of its kind in the USA. 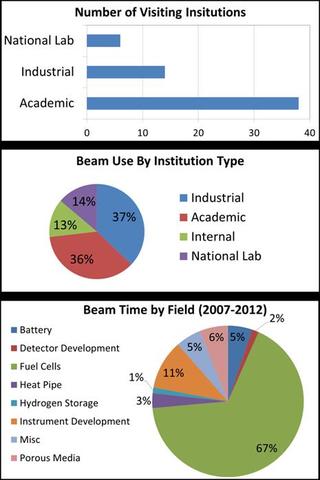 The facility is a national user facility that provides extensive infrastructure for performing fuel cell experiments as well as world class neutron radiography facilities to groups from industry, national laboratories and universities; from 2011 to early 2013 36 individual research groups have conducted experiments at the imaging facility and a total of 46 institutions have collaborated on these experiments, and the historic usage of the facility is shown in Figure 2. These groups compete for beam time through a competitive external peer review process. There have been over 40 published peer reviewed journal articles and/or conference presentations on the research performed at the facility on topics that include the following: Fuel Cells, Hydrogen Storage Beds, Batteries, Biology, Geology, Heat Pipes, Industrial proprietary and Neutron Imaging Methods and Devices Development. In addition there have been 8 patents since 2006. Awards to facility staff and researchers at the facility include 3 General Motors Charles L. McCuen Awards, 2 Presidential Early Career Award for Scientists and Engineers (PECASE) awards, 1 Arthur S. Flemming award, 2 Department of Commerce (DOC) Gold medals and 1 DOC Bronze medal. In addition facility users have received 2 masters degrees and 15 doctoral degrees. 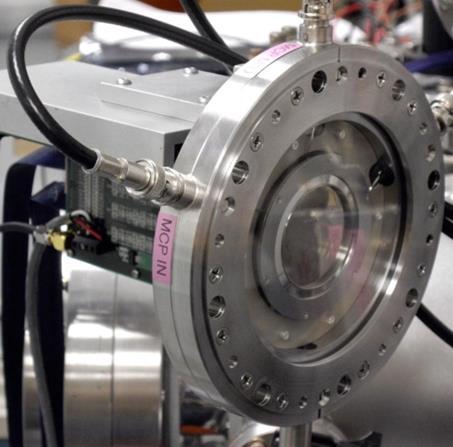 On average facility users spend five days to setup and carry out experiments at the facility. The facility staff train, assist, and collaborate scientifically with the users providing all the needed assistance and expertise to utilize the neutron radiography technique effectively in their research. Facility users are trained in radiation safety as well as the software written by NNIF scientists for analyzing image data. Users of the facility have access to dedicated expert technicians to setup and assemble mechanical equipment used in experiments. This facility allows industrial/academic researchers to study systems using the most advanced neutron radiography capabilities. These include the development of a 10 micrometer resolution detector (shown in Figure 3) as a standard capability for imaging fuel cells, and electro-impedance spectroscopy. An ongoing partnership and collaboration between General Motors and NIST has resulted in an exciting use of neutron imaging to visualize the operation of fuel cells and lithium-ion batteries for automotive vehicle applications. With a newly developed 10 micrometer spatial resolution detector, studies of the transport phenomena from the anode to the cathode in fuel cells and batteries have been conducted. These unique, fundamental measurements, provide valuable material characterizations that will help improve the performance, increase the reliability, and reduce the time to market introduction of the next generation electric car engines.
Physics and Radiation