Dr. McLinden received his BS degree from the University of Missouri-Columbia and MS and PhD degrees from the University of Wisconsin-Madison, all in chemical engineering. He joined what was then the National Bureau of Standards in 1984 and worked in the Thermal Machinery Group of NBS–Gaithersburg, where he developed an equation of state for refrigerant mixtures, carried out analytical studies on the optimum thermodynamic characteristics of refrigerants, and constructed an experimental apparatus to measure evaporative heat transfer coefficients. He joined the Thermophysical Properties Division of NIST in Boulder in 1988 where his research through the 1990s focused on the properties of alternatives to the ozone-depleting CFC and HCFC refrigerants. His current focus is on highly accurate measurements of fluid properties over wide ranges of temperature and pressure and the design and fabrication of instruments for such measurements. The current interest in low-GWP alternatives to the HFC refrigerants has reignited his research in the refrigerants area. He is the author or coauthor of more than 60 peer-reviewed publications and has received several awards related to his refrigerants research. When not in the lab, Dr. McLinden enjoys hiking the mountains of Colorado, often carrying 10 kg of large-format (i.e. film-based, old-school) camera gear; he maintains that film is not dead yet and has the landscape photos to prove it.

State-of-the art property measurements have been the hallmark of the Fluid Properties Group for more than four decades. Many of these measurements have been carried out on one-of-a-kind instruments developed at NIST, and Dr. McLinden continues this tradition. He developed, in collaboration with Rubotherm GmbH of Bocum, Germany (http://www.rubotherm.de/magnet.php(link is external)) a two-sinker magnetic suspension densimeter for the measurement of fluid p-r-T (pressure-density-temperature) properties. This instrument applies the Archimedes (bouyancy) principle together with a magnetic suspension coupling to separate the sinkers (sensing elements) from the balance that weighs them to allow measurements over very wide ranges of temperature and pressure (220 K to 505 K, with pressures to 40 MPa). This instrument is one of only a handful of its kind worldwide and is the world's most accurate instrument for wide-ranging density measurements. In addition to developing the densimeter (which was largely fabricated in the NIST Instrument Shops), Dr. McLinden has advanced this general type of instrument by analyzing the effects of the so-called "force transmision error." He has developed a single-sinker hydrostatic-balance densimeter operating at temperatures up to 500 ˚C and pressures to 50 MPa (also in collaboration with Rubotherm). He is currently collaborating with Dr. Richard Perkins to put into operation a spherical resonator for the measurement of vapor-phase speed of sound data. 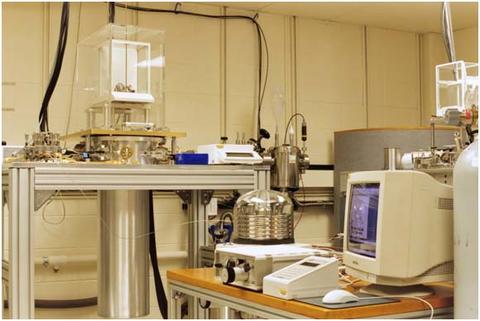 Dr. McLinden's measurements, and in particular those made with the two-sinker densimeter, feed into standards and improved fluid models and theory. His extensive measurements on propane were key data in developing a new equation of state that is among the most accurate for any fluid; propane is an important reference fluid for applications including natural gas and liquid fuels. In a collaboration with Dr. Michael Moldover, his measurements on helium were combined with theory to yield the most accurate virial coefficients available for this gas; these will be used in the development of a new primary pressure standard based on fundamental physical properties of helium. http://www.nist.gov/pml/div685/grp02/atomic_standard.cfm

He demonstrated that high-accuracy density measurements on gases could determine thermodynamic temperatures and thus be the basis for a new type of gas thermometer. The densimeter was used to extend the range of the Standard Reference Material® for liquid density based on toluene from the near-ambient conditions of the previous SRM to –50 ˚C to 150 ˚C, with pressures to 30 MPa; this is the widest range of temperature and pressure for a density standard from any National Metrology Institute.
https://www-s.nist.gov/srmors/view_detail.cfm?srm=211D
A similar project to extend the range of the iso-octane standard is in progress.

McLinden, M.O. (2006) Densimetry for primary temperature metrology and a method for the in-situ determination of densimeter sinker volumes. Measurement Science and Technology 17: 2597-2612.

McLinden, M. O. and Splett, J.D. (2008). A liquid density standard over wide ranges of temperature and pressure based on toluene. Journal of Research of the National Institute of Standards and Technology 113: 29-67.

Dr. McLinden has been actively engaged in researching "new" refrigerants for virtually his entire career. This work has included the development of equations of state and other property models and the development of the REFPROP database. He studied the optimum thermodynamic characteristics of refrigerantsin relation to the phase-out of the ozone-depleting CFC and HCFC refrigerants in the 1990s and is currently Principal Investigator for a major new DOE-funded project to search for and evaluate the thermodynamic potential of low-GWP alternatives to the HFC refrigerants. He chaired an International Energy Agency working group, known as Annex 18—Thermophysical Properties of the Environmentally Acceptable Refrigerants from 1990 to 1999 and served on an ISO Working Group which developed an international standard for refrigerant properties. He serves on several ASHRAE committees concerned with refrigerants. His interests in refrigerants and laboratory work recently intersected with measurements on two new fluorinated-propene refrigerants, R1234yf and R1234ze(E).

The NIST REFPROP Standard Reference Database (http://nist.gov/srd/nist23.cfm) provides properties for a wide variety of industrially important fluids. It is the de facto industry standard for the properties of refrigerants and is increasingly used in the natural gas and chemical process industries. It is one of the main tech transfer mechanisms for the outputs of the Thermophysical Properties Division. The various versions of REFPROP are the work of eight co-authors and numerous other contributors, and Dr. McLinden has been a co-author of every release of the NIST REFPROP database from version 1 in December 1989 to the current version 9, released in November 2010. REFPROP has its roots in an early, simple equation of state for refrigerant mixtures developed by Dr. Graham Morrison and coded by McLinden and informally distributed on magnetic tape. "REFPROP" originally stood for "REFrigerant PROPerties" and version 1 included just 15 pure refrigerants and their binary mixtures. Version 6 (1998) introduced a modern graphical user interface (coded largely by Prof. S.A. Klein of the University of Wisconsin) and a complete restructuring of the core property code. With version 7 the meaning of the name was changed to "REference Fluid PROPerties" to reflect the greater scope of the database. The current version includes 105 pure fluids and mixtures with up to 20 components; natural gas constituents, other hydrocarbons up to dodecane (C12H26), water/steam, cryogenic fluids, and other simple inorganic fluids are included in addition to refrigerants. Primary responsibility for REFPROP passed to Dr. Eric Lemmon (of the Theory of Fluids Group) in 2002 with version 7, but Dr. McLinden remains involved in its development and support.

Department of Commerce Silver Medal (1988), jointly with Graham Morrison, “For significant contributions to the U.S. refrigeration industry in the characterization and search for ozone-safe refrigerants.”

ASHRAE Journal Paper Award and the NIST Edward Uhler Condon Award (1988), jointly with David Didion, for authoring “CFCs—Quest for Alternatives.” The Condon award cited the paper as “a landmark contribution to the field of … refrigerants.”
[McLinden, M.O. and Didion, D.A. (1987). CFCs:  Quest for Alternatives. ASHRAE J.  29(12): 32-42]

Department of Commerce/NIST Federal Engineer of the Year (1995).

American Society of Heating Refrigerating and Air Conditioning Engineers (ASHRAE), Distinguished Service Award (2005) in recognition of those “giving freely of their time and talent to the Society.”

This project addresses the objectives of the Statement of Need number WPSON-17-20 "No/Low Global Warming Potential Alternatives to Ozone Depleting Refrigerants
There is a renewed interest in the use of the refrigerant CF3I for refrigeration and air conditioning applications, driven by its low global warming potential
As we enter the "fourth generation" of refrigerants, we consider the evolution of refrigerant molecules, the ever-changing constraints and regulations that have
Vapor-liquid equilibrium (VLE) data (T,p,x,y) are vital for the development of mixture thermodynamic models. Herein, we demonstrate the use of nuclear magnetic
A commercial gravimetric sorption analyzer, which is based on a magnetic-suspension balance, was significantly improved to reduce the uncertainty in adsorption
END_OF_DOCUMENT_TOKEN_TO_BE_REPLACED
Thermophysical Properties of Fluids Group
mark.mclinden@nist.gov
(303) 497-3580