Always on the lookout for better ways to measure all kinds of things, researchers at the National Institute of Standards and Technology (NIST) have published a detailed study suggesting an “elegant”  improved definition for the standard unit of light power, the optical watt.

But it’s more than just an opportunity to nerd out over an international measurement unit. The proposed definition promises a more precise, less expensive and more portable method for measuring this important quantity for science, technology, manufacturing, commerce and national defense.

“Johannes Kepler made the first observations of radiation pressure in the early 17th century,” NIST project leader John Lehman said. “A few years ago, we decided to create a primary measurement standard on this basis.” Maybe someday we will all redefine optical power this way.”

The proposed definition is based on James Clerk Maxwell’s work in 1862 showing that the force exerted by light is proportional to its power divided by the speed of light. Now, practical measurement standards can be created on this basis thanks to recent NIST technical advances.

The NIST proposal is in sync with the recent redefinition of the International Systems of Units (SI), offering more reliable measurements based on unchanging properties of nature. The watt is the SI unit of power, which, as Maxwell found, can be used to calculate force, or vice versa. The NIST suggestion might also help resolve debates over how best to define a related optical quantity known as luminous intensity. This quantity is expressed in terms of the SI base unit known as the candela, which depends in part on the properties of human vision.

The new study was done in the context of NIST’s laser power measurement and calibration services, first offered in 1974. In recent years NIST researchers have expanded the range of light power that can be measured, from very low light intensity of a few photons (light particles) per second to 100-kilowatt lasers emitting 100,000,000,000,000,000,000,000 photons per second.

To measure optical power the conventional way, researchers aim a laser at a coated detector, measure the detector's temperature change, and then determine the electrical power needed to generate an equivalent amount of heat. As is required for measurement standards, this method can be traced to the SI, but indirectly through the volt and the ohm, which in turn are “derived units” based on nist-equations using multiple SI units. NIST’s equipment for measuring the optical watt this way is large and not portable.

In the newer approach, laser power can be measured by comparing it to the force of gravity on a reference mass (typically weighed on an “analytical balance” or scale) or an equivalent force. NIST has recently developed a technique that measures a laser's force, or the push exerted on a mirror by a stream of photons. The result, measured in either milligrams (mass) or micronewtons (force), is traceable to the SI base unit the kilogram and can be used to calculate optical power. The approach is especially helpful for high-power lasers used in manufacturing and the military because it is simpler, faster, less costly and more portable than conventional methods. (Article continues below image.) 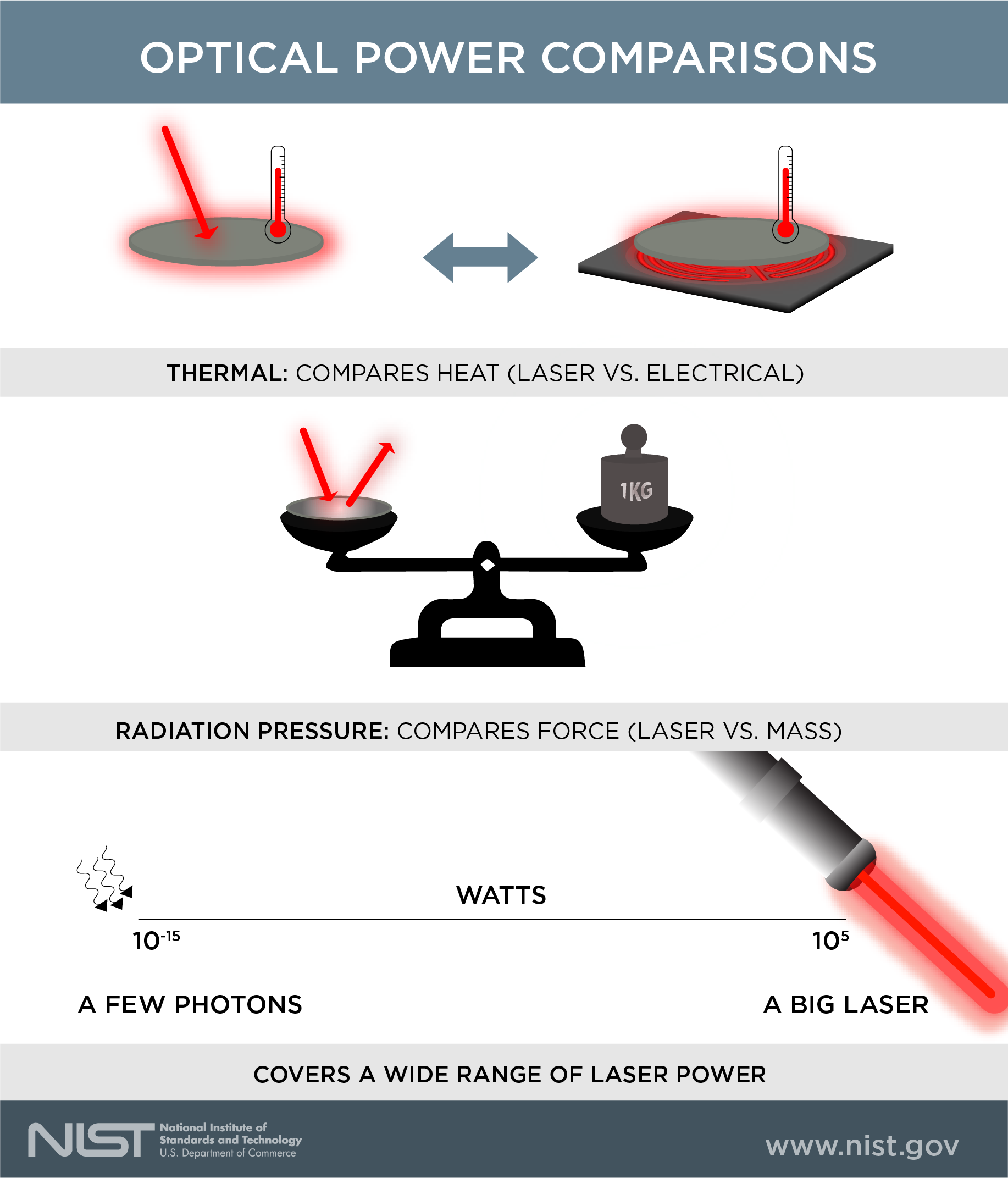 The new NIST study established the validity of the mass/force approach by finding strong agreement between its results and those of the conventional method. But the NIST proposal also offers several significant advantages: a portable primary standard in the form of a reference mass, and the potential for improved precision.

Calculations of mass require knowledge of the exact amount that gravity accelerates objects at a particular altitude and location. Force calculations do not, making it simpler as a primary standard.

The new definition could be:

The NIST team plans to present its results to date and proposal at an upcoming conference and continue the line of research.

“We are pursuing research to enable the radiation pressure approach to make the most accurate measurement of laser power in the world,” NIST physicist Paul Williams said.