A field off River Road, about 10 miles from NIST Gaithersburg campus, once held the world’s largest radio telescope and was the site of the discovery of planetary radio emissions. The discovery led to further work by NIST scientists in Boulder, CO. That same field is now a popular destination for gardeners and photographers during the summertime, and for hunters in the fall.

The story begins in 1955, when Bernard Burke and Kenneth Franklin, scientists at the Carnegie Institution in Washington, used this Mills Cross telescope at Seneca, Maryland, to study the northern sky. They concentrated on the Crab Nebula, a strong radio source.

In these relatively early days of radio astronomy, the equipment was constantly being tested, improved, and modified and some unusual data could result. In Spring 1955, they noticed some odd observations that they initially disregarded as interference from something near the field. In an account published in The Astronomical Journal Franklin said, “We joked that it was probably due to the faulty ignition of some farm hand returning from a date.” (This isn’t hard to imagine even today, as the area remains rural.)

When Burke and Franklin looked more closely at the records, they noted the interference was happening at a very regular interval, four minutes earlier each night. “A strange rural romance this was turning out to be!” said Franklin. And so they realized the “interference” was attached to the sky, and looking at their handy sky atlas, they tried to pinpoint the source. Nothing seemed right.

A colleague jokingly suggested Jupiter as the radio source. They all had a good laugh and considered the idea preposterous. Franklin went to the almanac to look up Jupiter’s position and prove it impossible. Hmm. Not so fast. Jupiter was in the right place. Franklin said, “Here was something which needed clearing up.”

The next day, Franklin got down to business and plotted the positions of Jupiter across their observation data. Franklin said, “As I plotted each point, Burke, who was watching over my left shoulder, would utter a gasp of amazement.” Jupiter was definitely, and completely unexpectedly, the source of the intermittent radiation they had measured.

As news of their discovery spread around the world, other scientists confirmed their findings and uncovered Jupiter data that had gone unrecognized. No one had considered the possibility that planets emitted radiation, so there was great interest in the discovery. It led to new ways of studying the solar system and opened a new field of radio astronomy. Franklin and Burke went on to have long and interesting careers.

The NIST Research Library’s Keith Martin wrote recently about NIST’s early work in radio astronomy, which led to the discovery of a NIST connection to the Seneca Observatory discovery. It was actually an immediate response from NIST (then called the National Bureau of Standards or NBS)… a young astrophysicist, Roger Gallet, at the Central Radio Propagation Laboratory in Boulder, suggested further investigations of Jupiter’s radio “signals” that began just months after the discovery, in November, 1955.

According to the NIST history volume Achievement in Radio, Gallet thought emissions from Jupiter would prove an interesting method of studying atmospheric phenomena, leading to a better understanding of both Jupiter and of earth’s atmospheres. His observations in Boulder continued for two years and yielded new information about Jupiter, demonstrating that it has an ionosphere, and like earth’s ionosphere, it changes with sunspot activity.

Back to our field in Maryland. No longer an observatory, here’s what the field looks like today.

You may have heard about it recently in the local media. This field is part of the McKee-Beshers Wildlife Management Area where acres and acres of sunflowers are planted (the seeds attract game birds for hunters in the fall).

The word has gotten out about the beauty of the sunflower fields, and if you visit you will find a crowd parked along River Road, as it’s become quite a draw for area photographers.

When you visit, be sure to note the historical marker located on River Road at the parking area. It pays tribute to Burke and Franklin’s amazing discovery right at that spot. 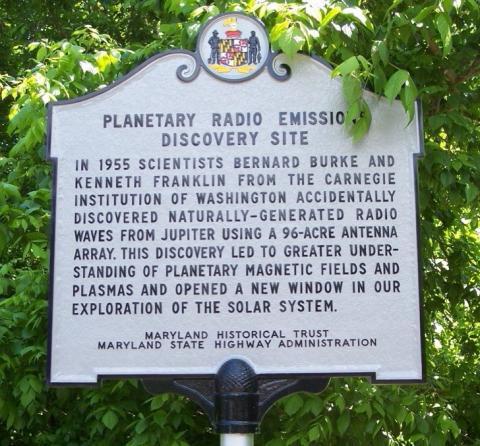