The National Institute of Standards and Technology (NIST) has unveiled the first "phantom" for calibrating MRI machines that is traceable to standardized values. The prototype, named Phannie, was developed in collaboration with the standards committee of the International Society for Magnetic Resonance in Medicine (ISMRM).

Traceable MRI calibrations are expected to enable accurate, quantitative measurements of tumors and other disease markers that can be reproduced across many different patients, scanners and clinics over time—and potentially reduce medical costs.

Displayed at the annual ISMRM meeting this past week,* the NIST phantom is a plastic sphere about the size of a person's head, filled with water-bathed grids of 100 small plastic spheres containing various salt solutions that become magnetized in a magnetic field. By making MRI scans of Phannie, users can evaluate the image contrast, resolution, and accuracy of distance and volume measurements. A machine's performance can be compared to standards, to other MRI machines, and to itself over time. 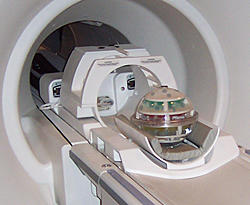 MRI scanner performance may drift, or different machines may produce different images of the same patient. The new phantom is intended to help generate more accurate and consistent images, help validate disease mechanisms and treatments, and reduce medical costs by improving image quality and reliability. The phantom will assist multisite clinical trials that use quantitative MRI to test the efficacy of novel drugs.

A number of specialized MRI phantoms already exist; the need for new ones to support quantitative studies was recognized at a NIST workshop in 2006.** NIST's is the first phantom designed to ensure that MRI system properties and image data are traceable to international system of units (SI) standards. The ISMRM Ad Hoc Committee on Standards for Quantitative MR defined the phantom requirements and values. NIST modeled and built the prototype device and assured the accuracy of measured quantities. NIST also developed and tested various solutions used in the mini-spheres as contrast-enhancing agents and measurement reference markers. Phannie will now undergo testing at other institutions for about four months.

Stephen Russek, the physicist leading NIST's part of the project, says the phantom is intended to be not only accurate and traceable but also physically stable and affordable, so that it can become as widely used in MRI machines as seatbelts are in cars. He demonstrated the durability of the mini-spheres by bouncing one on the floor. Materials for Phannie cost $10,000, but hopefully, in mass production the cost per phantom can be reduced to $2,000, he says.

"If it's accurate, reliable and affordable, then you have a way to measure the accuracy of MRI scanners all across the country," Russek says. "If used routinely, it will allow us to get a complete snapshot of the quality and consistency of scanning."