Magnetic refrigeration at ambient temperatures has attracted interest with the discovery of new materials with improved efficiencies and advantages, as potential replacements for the classical vapor compression systems in use today.  In particular, Pecharsky et al reported that Gd5(Ge2Si2) has a giant magnetocaloric effect (MCE) between 270 and 300 K, while Tegus et al. found that MnFe(P1-xAsx) with the hexagonal Fe2P-type structure has a paramagnetic-ferromagnetic phase transition that is strongly first order and exhibits a huge MCE.  In addition, the Curie temperature (Tc) and hence optimal operating temperature of this latter material can be varied from 200 to 350 K by tuning the P/As ratio without losing the large MCE.  However, the high cost of Gd, and the toxicity of As, make it questionable whether either material will be viable commercially on a wide scale.  On the other hand, recently the replacement of As by Ge (or Si) has been reported to still provide a very large MCE (up to 38 J/Kg-K for a field change of 5 T), circumventing the toxicity issue and thereby demonstrating its potential as a cost effective and environmentally friendly refrigerant.

For the particular material chosen to study here, we find that Mn1.1Fe0.9P0.8Ge0.2 is single phase and paramagnetic at higher temperature, single phase and ferromagnetic at lower temperature, and in between the system undergoes a strongly first-order phase transition as a function of temperature or applied magnetic field.  Both phases possess the same symmetry space group (P-62m) but have distinctly different structures;  the a- and b-axes are ~1.3% longer while the c-axis is contracted by ~2.6% in the ferromagnetic (FMP) phase compared to the paramagnetic (PMP) phase.  Therefore the diffraction peaks come at distinctly different scattering angles as shown in the figure below, where we follow the intensity of the (001) Bragg peak as a function of applied field. Initially we are in the paramagnetic phase since T > TC, and we find that there is an abrupt phase transition between the paramagnetic phase at low field and the ferromagnetic phase in applied field.  This field-dependent transition can be used in a magnetic refrigeration cycle. 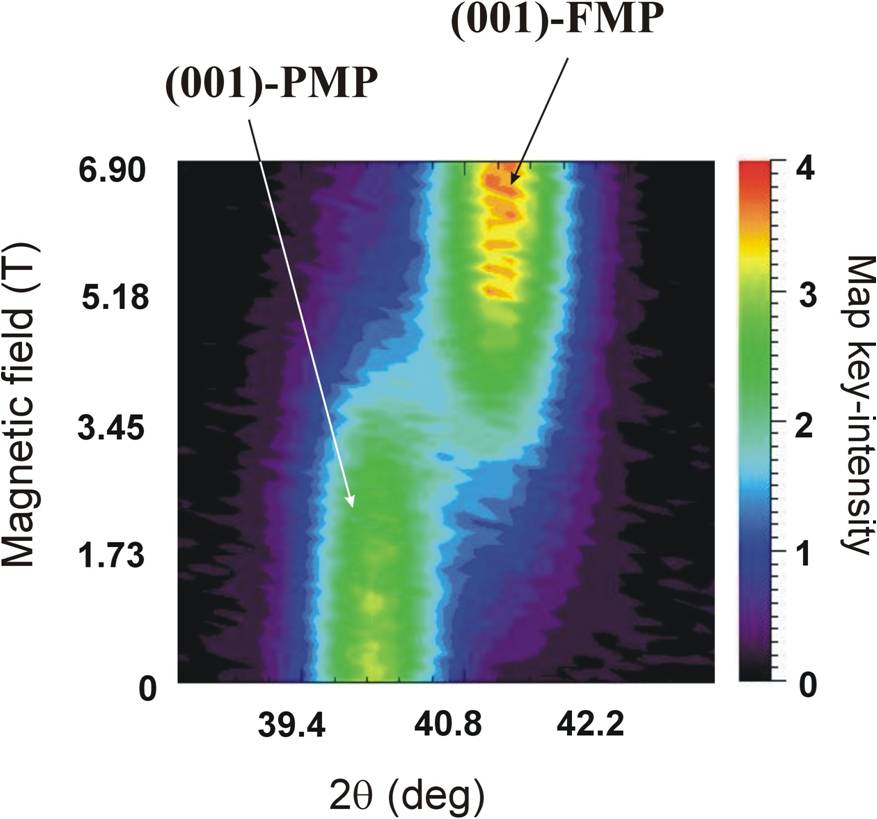 (001) Bragg peak diffraction data for the paramagnetic (PMP) and ferromagnetic (FMP) phases as a function of field.  The difference in c-axis lattice parameter means that the peak occurs at a distinctly different diffraction angle.

We have found that the large MCE in this material originates from simply converting one phase to the other, with most of the entropy change coming from the structural transition rather than the magnetic phase change.  The interesting result, however, is that both transitions can be simply controlled by the magnetic field.  Using the standard Maxwell relations method, we obtain the maximum magnetic entropy changes from the isothermal magnetization in both magnetic field increasing and decreasing mode, of 74 and 78 J/kg-K, respectively, for a field change of 5 T in a bulk Mn1.1Fe0.9P0.8Ge0.2 compound.  This is twice the previous value for this system and the highest MCE for any material presently known. The improved properties and overall advantages of this material open the possibility for its use in wide scale magnetic refrigerant applications.

Temperature dependence of the magnetic entropy change of the bulk Mn1.1Fe0.9P0.8Ge0.2 compound as a function of applied magnetic field up to 5 T.

Very recent work has now been carried out to further improve the properties, using neutron diffraction, differential scanning calorimetry, and magnetization measurements to study the effects of both crystallite size and Mn and Ge location in the structure on the ordered magnetic moment, MCE, and hysteresis of the material. This work demonstrates how to tune the properties, and shows that the composition Fe0.83Mn0.17(P0.74Ge0.26) has a giant magnetocaloric effect (MCE) (35.5< MCE<46.5 J/kg-K) near room temperature and in low magnetic fields (<1.2 T), and small thermal hysteresis (<2 K).  This material therefore is a good candidate for commercial magnetic refrigeration.  This work has been submitted for publication.