From the symmetry of Maxwell's equations of electromagnetism, as well as field theoretical arguments, magnetic charges or monopoles would be expected to exist and produce magnetic fields, and moving magnetic monopoles electric fields. But no magnetic monopoles have ever been observed despite longstanding experimental searches1 since the hypothesis of the Dirac monopole2. Recently, attention has turned to condensed matter systems where tractable analogs of magnetic monopoles might be found, and one prediction3 is for an emergent elementary excitation in the spin ice compoundDy2Ti2O7.  'Spin Ice' is a special magnetic system where the Dy spins occupy a cubic pyrochlore lattice, which is a corner sharing network of tetrahedra with the spins located at the vertices of the tetrahedra (see figure below).  The magnetic anisotropy requires the spins to point along a line to the center of the tetrahedron, either parallel or antiparallel, while neighboring spins interact via an effective ferromagnetic coupling.  The interactions between all the spins in the system cannot be optimized simultaneous, making the magnetic spins 'frustrated', and preventing a conventional ordered magnetic state to form even at the very lowest temperatures achievable.  Instead of a conventional ground state with long range magnetic order, the lowest energy spin configurations on each tetrahedron follow the ice rule, in which two spins point inward and two point outward on each tetrahedron.  This "2-in & 2-out" ground state spin structure has a six-fold degeneracy (see Figure below), and the possible ground states of the entire tetrahedral network are macroscopically degenerate in the same way as the famous example of disordered protons in H2O ice.  In solid water, the protons are disordered even at absolute zero temperature and thus retain finite entropy, and the same disordered ground state occurs for the magnetic moments in Dy2Ti2O7,--hence the name 'Spin Ice'.

In addition to this remarkable behavior, it has been recently theorized3 that the excitations from these highly degenerate ground states are topological in nature and mathematically equivalent to magnetic monopoles.  We have carried out neutron scattering experiments that confirm the existence of monopoles in spin ice, and that they interact via the magnetic Coulomb force.4 The establishment of magnetic monopoles in this condensed matter system represents a fundamentally new type of collective excitation, and opens the door for studies of aspects of magnetic monopoles that include pair creation and interaction, individual motion, correlations, and cooperative phenomena.

These cubic pyrochlore materials, with their competing interactions and magnetic frustration, exhibit many other interesting emergent properties.  Including the quantum spin fluctuations inherent at these very low temperatures ( < 1 K), no magnetic order at all may occur, leading to a hidden order state of electric quadrupole moments, neighboring a spin liquid that is likely a U(1) quantum spin liquid state.5,6,7

See the Invited Talk (C9.2) entitled "Observation of Magnetic Monopoles in the Spin Ice Dy2Ti2O7" presented at the International Conference on Neutron Scattering (May, 2009). 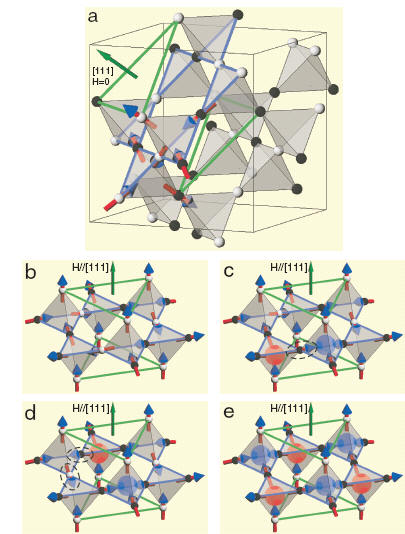 Illustration of spin ice, kagome ice and magnetic monopoles.  a, Magnetic moments (spins) of Dy2Ti2O7 reside on the corners of tetrahedra of the cubic pyrochlore lattice. They are represented by arrows pointing inward or outward from centres of the tetrahedra, depicted equivalently by black and white spheres. At low temperatures, four magnetic moments on each tetrahedron obey the ice rule, two spins pointing into each tetrahedron and two pointing out  (2-in and 2-out structure) to minimize the effective ferromagnetic interaction between neighbouring spins. The resulting spin ice state consists of a macroscopic number of disordered configurations, an example of which is shown in a above. The pyrochlore lattice consists of stacked triangular and kagome lattices, shown by green and blue lines, respectively, along a [111] direction. (b) Under small [111] magnetic fields, spins on the kagome lattice remain in the disordered kagome ice state. (c) An excited state is induced by flipping a spin from (b), enclosed by a dashed circle, where neighboring tetrahedra have 3-in, 1-out and 1-in, 3-out configurations. These ice-rule-breaking tetrahedra are represented by magnetic monopoles with opposite charges depicted by spheres. (d) By consecutively flipping two spins from (c), the monopoles are fractionalized. (e) As the magnetic field is increased, H >> Hc, spins realize a fully ordered, staggered arrangement of monopoles.

An article about the work is available at 2Physics.com:

in the November 2009 archives of 'Condensed Matter' or 'Elementary Particles'.