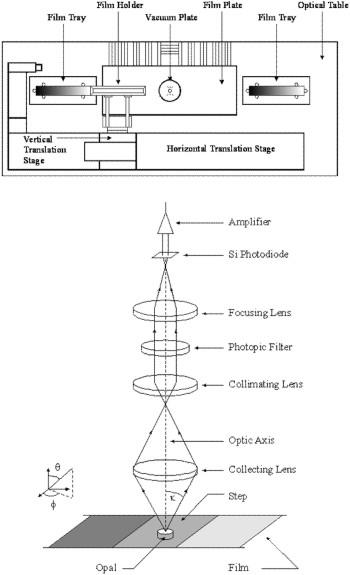 The Reference Transmission Densitometer (RTD) is the national reference instrument for standard diffuse visual transmittance density measurements for x-ray and photographic step tablet films, previously known as Standard Reference Materials (SRMs) 1001 and 1008. These standards are paramount in the measurement of visual transmission density, which is an important physical property for exposed films in the field of medicine, nondestructive testing, photography, and graphic arts. The instrument and measurements conform to the conditions specified for ISO Standard Diffuse Visual Transmission Density, DT (90° Opal; SH: ≤ 10°; VT).

The RDT consists of an illumination system, a film transport system, and a detector system. The illuminator system consists of a lamp, a filter, a shutter and an opal and provides diffuse illumination to the film step tablet with the recommended spectral flux distribution. The shutter assembly blocks all light from reaching the opal assembly, allowing a background, dark signals, to be taken. The film transport system transports a standard film from the film tray to the flash opal, positions the film above the flash opal to measure the transmission density on each step of the film, and then transports the film to the film tray on the opposite side of the instrument. The flash opal is the aperture of the detector system, which detects the efflux from the acceptance cone and focuses the radiant flux onto a silicon diode. This system consists of a silicon photodiode, a photoptic filter, a collecting lens, a collimating lens, a focusing lens, a temperature controller, an amplifier, and a voltmeter.

The transmission density, DT, is calculated from the ratios of the signal and the gain. A set of five signal readings are averaged and the dark signals at each gain setting are subtracted from those signals at that gain setting to yield the net of the signals. For each step on the film, the transmission density is calculated by

The RTD has the capability of measuring films that are 254 mm long by 35 mm wide with steps extending the width of each film. The steps increase in diffuse visual transmission density from approximately 0.1 to 4.0. The double emulsion x-ray films have 17 steps and the single emulsion photographic films have 23 steps.