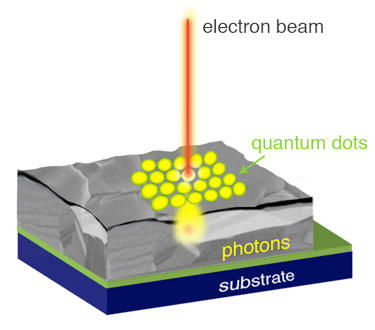 Much like in an old tube television where a beam of electrons moves over a phosphor screen to create images, the new microscopy technique works by scanning a beam of electrons over a sample that has been coated with specially engineered quantum dots. The dots absorb the energy and emit it as visible light that interacts with the sample at close range. The scattered photons are collected using a similarly closely placed photodetector (not depicted), allowing an image to be constructed.