Some of the most useful and compelling information obtained during a fire experiment comes from visual observations. However, the extreme environmental conditions present in a fire necessitate limited access during experiments. Current solutions to collect visual data from fires have largely been limited to two-dimensions, often with a narrow field of view and for limited periods of time; e.g. until the camera is destroyed. High-resolution omnidirectional cameras are rapidly getting smaller, better and cheaper and the 360-degree images and video they capture provide a more immersive viewing experience. However, to use such cameras in a fire, two problems must be solved: how to keep the camera cool and how to protect the camera from the intense thermal radiation the fire gives off. 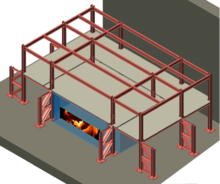 The test structure is a two-story, two bays by three bays gravity frame with each story height of 3.3 m. The test bay (at the center of the building) measures 6.1 m by 9.1 m and will be hydraulically loaded to service gravity loads. The fire will be produced by natural gas fueled burners with a total maximum capacity of 16 megawatts and confined to the test bay using enclosure walls. The first test will be a standard fire test to generate baseline data for current U.S. practice. For later test series, a test fire designed using NIST’s Fire Dynamics Simulator (FDS) will be used to simulate a post-flashover fire followed by cool-down.

This study deals with compartment fire experiments on 12.8 m long composite floor beams with various end support conditions. Each specimen was constructed as a partially-composite beam, consisting of a lightweight concrete slab cast on 76 mm (3 in.) deep ribbed steel decking and a W18×35 steel beam acting compositely via 19 mm (3/4 in.) diameter steel headed stud anchors welded on the top flange.

This study extends the Phase 1 project to experimentally investigate the performance of common lateral force-resisting systems (LFRS) used in cold-formed steel (CFS) construction under sequential thermal (fire) and mechanical (earthquake) loading. Wall specimens with gypsum-sheet steel composite sheathing, Oriented Strand Board (OSB) sheathing, or steel strap bracing are tested. The tests will provide data for a range of system performance under realistic fire conditions and can inform: fire compartmentation design when significant lateral deformation of the building is anticipated, post-fire assessment to repair or replace a structure, and first responder decisions to enter a building when earthquake aftershocks are likely.

This study quantifies the contribution of CLT building elements to compartment fires and characterizes the effect of gypsum board on delaying or preventing involvement of the CLT in the fire under varied ventilation conditions. Six compartments (9.1 m long x 4.6 m wide x 2.7 m high) were assembled out of prefabricated CLT panels and subjected to fire generated by burning real residential furnishings with a fire load density of 550 MJ/m2. The fire tests were conducted without sprinklers and without firefighting intervention.

This study experimentally investigates multi-hazard (earthquake & fire) interaction for steel-sheathed cold-formed steel (CFS) framed shear walls. These lateral load-resisting systems are widely used in seismic regions in the western United States. Six 2.7 m by 3.7 m shear wall specimens were fabricated consisting of 150 mm wide CFS framing sheathed on one side with sheet steel adhered to Type X gypsum board and on the opposite side with Type X gypsum board. The specimens were subjected sequentially to varied combinations of mechanical (shear) deformation and thermal (fire) loading. 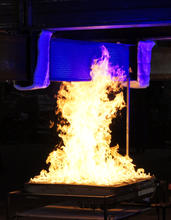 Nine localized fire tests on steel beams were conducted as part of the commissioning of the National Fire Research Laboratory. The tests include thermal tests (Tests 1 through Test 5) and four-point bending tests at ambient (Test 6) and elevated temperatures (Tests 7 through Test 9). All the specimens were nominally 6.2 m long W16×26 beams made of ASTM A992 steel. Each specimen was either (i) simply supported (Tests 1 to Test 8) or (ii) connected using double-angles bolted to laterally braced columns (Test 9). In the thermal tests, mid-span of each specimen was exposed to a diffusion flame generated by a 1 m2 natural gas burner. 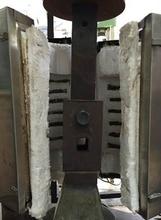 This data presents results from tests on high-strength structural bolts subject to double shear loading at elevated temperatures. The parameters varied included the bolt grade, bolt diameter, and temperature. Bolt grades A325 and A490 were tested. For each bolt grade, three different diameters were tested (19 mm (3/4 in), 22 mm (7/8 in), and 25.4 mm (1 in)) at five different temperatures (20 ºC, 200 ºC, 400 ºC, 500 ºC, and 600 ºC). The results from these experiments fill a critical knowledge gap currently present in the literature regarding the behavior of high-strength structural bolts under shear loading at elevated temperatures.