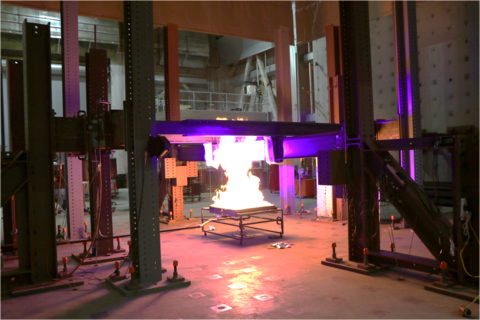 A total of nine localized fire tests on steel beams were designed and conducted in the National Fire Research Laboratory as part of its commissioning project. Test series included thermal tests (Tests 1 through 5) and four-point bending test at ambient (Test 6) and elevated temperatures (Tests 7 through 9). All the tested specimens were nominally 6.2 m long W16×26 beams made of ASTM A992 steel. Each specimen was supported by columns using one of the two following connections: (i) simple support (Tests 1 through 8), and (ii) double-angles bolted to laterally braced support columns (Test 9). The midspan of each specimen was exposed to an open-flame fire using the 1 m2 natural gas burner. The burner was located 1.1 m below the bottom flange of the beam at midspan. A four-point flexural loading scheme was used to apply concentrated forces at two locations 2.44 m apart around midspan. The test results showed that the heating rate of the specimen was sensitive to the prescribed heat release rate-time relationship. However, the thermal gradient developed in the fire-exposed cross sections of the beam never achieved linearity under the localized fire exposure. Regardless of the connection types (i.e., simple support or double-angles) and fire conditions (i.e., steady-state or transient-state fire), the beams exhibited a similar behavior and failure mode. When subjected to flexural loads under a localized fire, the beam specimens exhibited the lateral-torsional buckling followed by runaway vertical displacements at midspan. The data generated from the tests can be used for validation of computational models (e.g., computational fluid dynamics models and finite-element models) to predict the performance of structural steel members subjected to a localized fire.

The data is presented in one file. This file includes 12 spreadsheets including drawings for test setup and specimen, sensor layout and labels, names of sensors used in each test, and data from nine individual tests (referred to spreadsheets Tests 1 through 9). The data included temperatures, the heat release rates from the burner, and structural measurements including forces, displacements and strains.