Remember that documentary you saw that finally explained metrology and why measurements are critical to practically every aspect of modern life? Yeah, neither do I. Probably because that documentary doesn’t exist …

The Last Artifact, a new one-hour film that PBS stations are planning to broadcast starting this month, aims to fill that cinematic void by bringing metrology to the people. It tells the tale of measurement science and features researchers from metrology laboratories around the world, including several faces from the National Institute of Standards and Technology (NIST).

Perhaps the most prominent character in the film, however, is inanimate: the eponymous “Last Artifact,” aka the International Prototype Kilogram, aka “Le Grand K.” This cylinder, composed primarily of platinum, served for 130 years as the definition of the kilogram and the standard for practically all measurements involving mass. Its longtime status of defining the mass of the kilogram officially ended in May 2019 as a result of an international vote in late 2018 to redefine the kilogram based on fundamental constants of nature, including the speed of light and Planck’s constant.

As part of that historic redefinition of the International System of Units, other units of measurement — the ampere, the kelvin and the mole — were also redefined in terms of natural constants. But it was the kilogram that seemed to capture people’s imaginations. Its ascension from the material to the universal evoked something bigger and more profound. And, it didn’t hurt that Le Grand K also had a certain mystique, residing in international territory just outside Paris, inside a triple-locked underground vault in  a pavilion built by the brother of Louis XIV in 1672 and later restored by Napoleon.

As a defining measurement standard embodied in a physical artifact, Le Grand K was indeed the last of its kind. The evolution of the kilogram even served as a sort of metaphor for the work of metrologists over the decades, who took the long view and strove to make our units of measurement increasingly accurate and egalitarian by basing them on the ultimate standard of objectivity: nature.

In the words of former NIST Director Willie May, “This would make a pretty good movie.”

Check out the trailer for the film.The film will premiere on Colorado Public Television on Sunday, September 20, at 9:00 p.m. MDT and play again on Monday, September 21, at 2:00 a.m. Then it will be shown on WETA World at 8 p.m. EDT and the Rocky Mountain PBS Create/World channelat 11 p.m. MDT, both on September 24, 2020. Check your local listings for other showtimes.

The film has received several accolades including being awarded the international award for "Best Documentary Feature" at the British Documentary Film Festival.

PBS Learning Media created a digital learning collection with media from The Last Artifact, which contains 12 short videos on instruments, measurements, and units for grades 5-12, available to educators everywhere.

In addition, Jason Learning, a 501(c)3 organization that provides STEM curriculum for U.S. K-12 teachers, will include five videos from The Last Artifact as part of their new physics curriculum surrounding the redesign of the SI system, to be released in fall 2020. 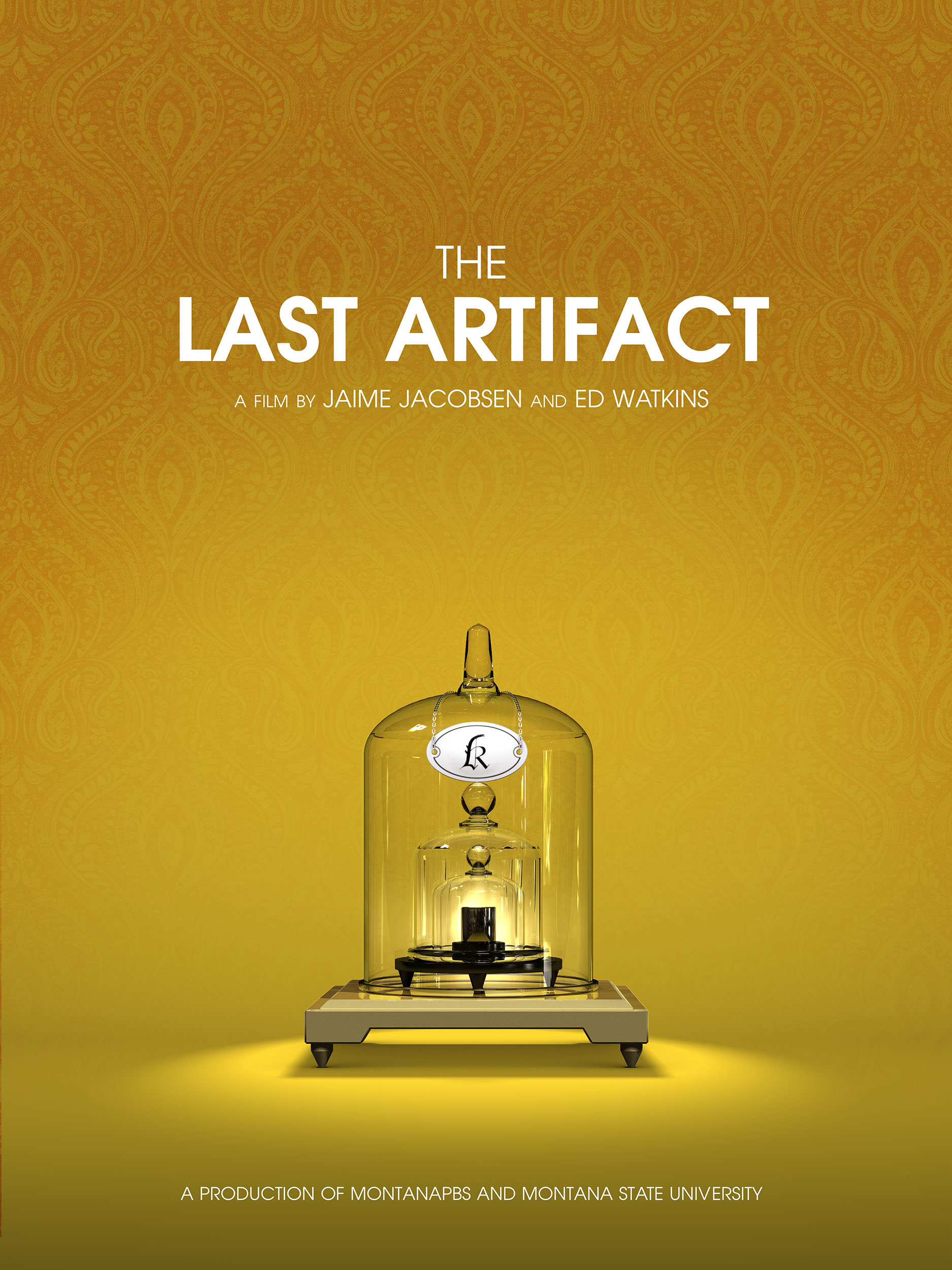 A small but fascinating niche

In 2016 when documentary filmmakers Jaime Jacobsen and Ed Watkins applied for the NIST grant providing up to $500,000 to create a science documentary about the redefinition of the kilogram, they knew they had a rare opportunity. “This grant provided us with the means to make a beautiful science film that could have a large impact,” says producer and director Jacobsen, who led the team that created The Last Artifact.

“Metrology is a fascinating topic, but not one that commercial broadcasters would ever fund upfront,” says writer and co-director Watkins in describing the dilemma of how to make and nationally distribute a film about an important but largely unknown scientific subject.

As veteran documentary filmmakers, Jacobsen and Watkins know all about the challenges of getting science on screen. They first met in 2005 when they were students in the Science and Natural History Filmmaking program at Montana State University. Jacobsen went on to produce numerous documentaries, including Finding Traction, which was featured on both Netflix and Amazon Prime. She has filmed on every continent except Antarctica. Watkins has produced science and natural history documentaries for PBS, the BBC, NOVA, National Geographic and others. His best-known production is perhaps Stephen Hawking’s Favorite Places, a three-part miniseries that featured the famous University of Cambridge physicist and won a national news and documentary Emmy Award in 2017.

“The huge advantage of The Last Artifact being funded through a grant was that we had the ability to make a show without having to worry about what any given channel's executive producer would demand,” says Watkins. “In the end, that allowed us to make a far more engaging and accessible film than otherwise would have been possible.”

As science-filmmaking pros with an impressive credit list — having documented and explained everything from ants to black holes — Jacobsen and Watkins were experts in using the techniques of filmmaking to explain and demystify complex topics and concepts. And although they were well versed in the milieu of scientific research, even they had never heard of the science of metrology prior to learning about the NIST grant.

They would spend the next three years becoming experts.

How on earth do we tell this story?

After Jacobsen and her team were awarded the NIST grant in early 2017, they spent two years traveling the globe, filming in six countries and recording detailed interviews with 25 different researchers at metrology labs and other institutions. The footage they captured includes rare scenes of Le Grand K itself, when the three keyholders to its underground vault assembled in October 2017 to open the rarely unsealed sanctum.

Jacobsen, Watkins and their team spent a year editing and polishing this massive repository of footage into a cohesive one-hour film that tells the tale of measurement science through the ages, culminating with the now-legendary 2018 meeting of the General Conference on Weights and Measures in Versailles, France, where representatives from 60 countries unanimously agreed to redefine the kilogram, the kelvin, the ampere and the mole based on constants of nature.

“How on earth do we tell this story?” Jacobsen recalls thinking when she started work on the film. “The science behind the redefinition is incredibly technical. As a storyteller, that presents a real challenge.”

And, let’s face it, metrology is a little quirky. Jacobsen and Watkins picked up on this during their travels to metrology institutes around the world, and it inspired them to adopt a style for The Last Artifact that any fan of the movies Rushmore or The Life Aquatic with Steve Zissou will recognize. Watkins explains: “The more metrologists I met, the more I was struck by the meticulous nature of their work and how joyfully passionate they are about their research. Stylistically, Wes Anderson's films are just like that — clean, precise, and delightfully warm and joyful.”

Let’s hear it for the metrologists

For thousands of years, human-made measurements were defined by varied and sometimes capricious physical artifacts like the width of a barleycorn or the length of a particular king’s foot. The French Revolution gave rise to the metric system — now subsumed into the International System of Units — kicking off a 200-year movement toward truly universal standards of measurement that are both fair and necessary for the advancement of society.

“When someone watches The Last Artifact, I hope they come away with a sense of awe for the scientific process and the scientific work that goes on behind the scenes,” says Jacobsen. “We don’t hear about it often, but it underpins our world and keeps our society going.”

“There are so many things we take for granted, and barely even stop to wonder about,” adds Watkins. “I hope people see just how important scientists really are."

*Edited September 14, 2020, to reflect that the film is being shown on WETA World and to include information about the availability of PBS Learning Media content.

In addition to being an unabashed science fanboy, Jason Stoughton is a writer, photographer, video producer and former director of NIST internal communications (now working at the National Science...

Advanced therapies are poised to change the face of medicine, promising to cure diseases that have long resisted us. But there are many challenges to overcome

The Academy of Television Arts & Sciences today announced nominations for the 2020 Primetime Emmy Awards, which recognize some of the best TV shows of the year