On August 29, 2005, I was starting my first semester teaching freshman environmental engineering majors at Humboldt State University in Arcata, California. At the exact same time, Hurricane Katrina hit Louisiana and Mississippi with 190 kph (120 mph) winds and a storm surge in excess of 6 meters (20 feet). Levees failed, flooding over 80% of New Orleans and many surrounding areas. This tragedy left over 1,800 people dead, many of whom had been trapped in their own homes. It took nearly six weeks for the water to recede, exposing over 130,000 destroyed housing units.

I spent the rest of the semester (and subsequent ones) discussing with my students the lessons that environmental engineers should learn from Katrina and its aftermath (levees, water treatment, mold, air testing, planning for disasters and more). Little did I know I would still be dealing with some of the issues revealed by Hurricane Katrina nearly 15 years later as a scientist at the National Institute of Standards and Technology (NIST).

Together with my colleague Jennifer Woertz, I visited New Orleans four times over the 10 months following Hurricane Katrina’s landfall. We entered the city before residents were allowed back in. Seeing the scale of the damage firsthand in an eerie silence was shocking and apocalyptic. We visited 10 houses and a school to characterize the species of mold present and the airborne mold spore concentrations, and to measure the change in the moisture content of the wallboard and studs.

As people slowly began to return to the city, two major tasks faced every homeowner: removing the mold-contaminated material (which exposed numerous volunteers to elevated concentrations of mold spores) and finding a place to live.

The Federal Emergency Management Agency (FEMA) attempted to meet the second challenge by supplying more than 100,000 trailers. The number of existing trailers in the U.S. when Katrina hit was about 10 times fewer than was needed, so FEMA greatly expedited trailer delivery. Compared with the devastated homes Katrina left, the clean, new trailers were a relief. However, occupants soon began reporting nosebleeds, headaches and breathing issues. Private and federal testing undertaken between 2006 and 2008 determined that wood products used in the trailers’ construction were emitting formaldehyde (a known carcinogen) at a high rate, resulting in concentrations that were five to 40 times that found in the average home. 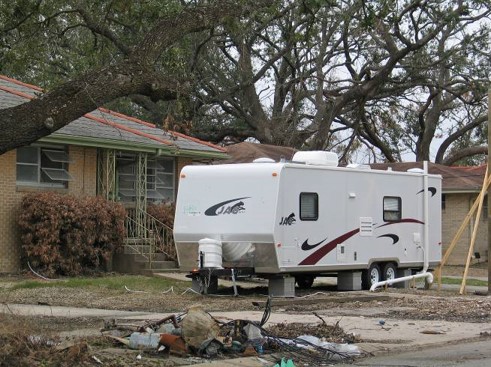 But this was not the first or last time formaldehyde emissions from wood products were in the news. The California Air Resources Board (CARB) declared in 1992 that there was no safe level of formaldehyde exposure. Wood products such as hardwood plywood, particleboard, and medium-density fiberboard (MDF) were targets for regulation given the large volume sold and the use of formaldehyde-based resins to hold the wood components together. While the Katrina trailers were being tested for formaldehyde, CARB passed (in 2007) the Composite Wood Products Airborne Toxic Control Measure, which limited the emissions of formaldehyde from wood products that were sold or manufactured in California. Fully implemented in 2012, the measure instituted mandatory emission testing for wood products along with a third-party certification program. The federal Formaldehyde Standards for Composite Wood Products Act of 2010 was modeled on the California measure, and the EPA rule to comply with the act was fully implemented on March 22, 2019. For compliance testing in both cases, the wood products are placed in a chamber flushed with clean air. Once stable, formaldehyde concentrations are then compared to the values allowed by regulations. Products not meeting these values cannot be sold.

Just like we want to make sure the gallon (3.8 liters) of gasoline we are buying is actually a gallon of gasoline, there is a need to ensure that the formaldehyde concentrations measured by the wood product manufacturers and third-party labs are accurate. There are many variables that affect formaldehyde measurements: temperature, relative humidity, air flow and mixing, and the measurement technique. My goal, along with my NIST colleague Mengyan Gong, is to create a reusable source that releases formaldehyde into the chamber in a controlled way and can be used with the testing techniques required by CARB and EPA statutes. This will allow testing labs to certify results faster without requiring time-consuming studies comparing the results achieved by multiple laboratories.

Currently, our prototype reference material consists of a bottle made of stainless steel and a material commonly used as a nonstick coating. The bottle is filled with a solution of formaldehyde in water. Release of formaldehyde from the bottle is limited by a replaceable thin membrane in the cap. The membrane is currently being produced by our colleagues Christopher Stafford and Marcos Reyes-Martinez.

We hope that after further testing, we can produce a reference material that will give consumers confidence that the wood products, cabinets and flooring they buy at their local home improvement store will not emit significant amounts of formaldehyde.

As bad as Hurricane Katrina was, it did teach us a lot about our response to and recovery from storms and brought many important issues to light. I’m glad that work done by my colleagues and I might help people breathe a little easier in the future.

Dustin Poppendieck got his Ph.D. in environmental engineering in 2002 from the University of Texas at Austin.  His current efforts are focused on quantifying emissions into indoor air from household...

very interesting, especially since many schools use portable trailers for classrooms. why does it take 9 years though for a law to be enacted fully?

That is a good question that is best directed at EPA. NIST is not involved with regulations or enforcement.

Dustin: thx for the great story.

Re: delay in regulating: ask Peggy Jenkins at IAQ program at CARB (I have retired from the program)... As I recall we tried for several years to regulate formaldehyde, but what finally pushed it thru was the flooding of the market by cheap composite wood with very high formaldehyde emissions.
This brought US manufacturers to the table. Internal legal, political, and turf issues probably held CARB back before that.

A similar story occurred with our regulation of ozone generating air cleaners.

RE: EPA delays: politics as usual.

Tom, good to hear from you again!

I wasn't privy to the politics at that point while I was at HSU. But I may just see if Peggy has any more insight as I am looking at the history of these regulations now.

Thank you for a very information article.
For consumers, is a ‘home test’ available that meets NIST measurement stands? (formaldehyde, molds or other VOCs) If not, what is the process for testing? Thanks again; and Hook ‘Em!

There are many different consumer-level devices that are sold that claim to measure various indoor air quality parameters in real time (VOCs, formaldehyde, and PM2.5). Currently, there are no standards to verify the manufacturers' claims. We are working with regulatory agencies (NIST is not a regulatory agency), manufacturers and laboratories to come up with consensus standard testing methods for these instruments. However, it will take several years for them to be approved and implemented. In the meantime, you can contact testing laboratories to send you a time average sampling device, that then gets sent back into the lab for analysis. However, these samples can cost $100-$200 each.

Dustin, I found measuring for gasses to be very difficult and am glad NIST is on the job. You should know there are varying levels of sensitivity based on my anecdotal evidence. Also, I would be seeking a tie in with multiple chemical sensitivities. We are in such a hurry and the housing shortage is significant so this work needs to be fully funded and we need to find a way forward. Congratulations.

While testing medical patients sensitivity to formaldehyde, a simple "bubbler" ( stainless steel container filled with Glass beads) was used, maintained in a heated Water bath, and at a given Air flow rate of a few CC/minute. This gas flow, containing formaldehyde, was then mixed with about 3,000 L/min airflow into a large test booth (15'X15'X10' tall). Since we knew the vapor pressure of formaldehyde at the "bubbler" temperature, one could compute the mixture PPM flowing into the test booth/room.

That is definitely another approach for generation of a gas standard. The issue we had with that approach for a certified standard is that NIST would need to certify the flow rates which would add to the cost.