All Around the Kitchen: Tales of a Kitchen Remodel Sourced in the U.S.

Without manufacturing, the room where you make dinner would be rather stark and barren. There’d be no pots, no pans, no stoves, no spatulas, no appliances – big or small. There’d be no way to prepare the meals that give you and your family sustenance. With no counter, there wouldn’t even be a place to set down your coffee cup!

While this blog will not be as lyrical (nor as humorous) as the famous song, All Around the Kitchen written by Pete Seeger, I thought it would be fun to share my recent observations based on a kitchen makeover we had done. For those that know me well, I am cheap, so I braced myself for the anticipated expense. I am still recovering from the expenditure, but it was fun to watch it come together.

I thought it might be an interesting experiment to see how much of the kitchen makeover could be sourced in the U.S. It’s not only a kitchen, but a testament to the why manufacturing matters and that you can indeed find things made right here. The process took some time. 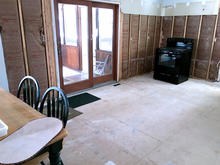 We first met with the kitchen designer from Schmuck Lumber Company located in Hanover, PA. I love those old school lumber companies and this one was recommended by our contractor. By the way, potato chips and pretzels are also made in Hanover. After a long discussion about the new layout of the kitchen, we forged on to cabinet selection. We chose Schrock Cabinetry, located in Arthur, IL which is known for its fine heritage of Amish craftmanship.  The next big decision was the flooring. We decided on hardwood and chose Armstrong Flooring, in Lancaster, PA. Armstrong has a 150-year history and 15 manufacturing facilities worldwide, with 13 of them located in the U.S. On to the countertops (see the importance of coffee cup placement in paragraph 1). We went with quartz, made in Adairsville, GA by LG Hausys America Inc. Following that was the tile for the backsplash. We decided to go with a tile made by Sonoma Tilemakers out of California. The tile we ordered – a 3”x 6” beveled subway tile – is made by the company at their California factory. 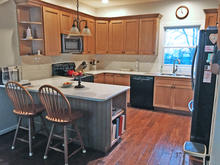 As part of the makeover, we also put in a larger window over the sink, took out the slider and put in a door. The window we purchased was an Anderson Window. Headquartered in Bayport, MN, the packaging proudly noted that it was “MADE IN THE USA.” The door we purchased to replace the sliding door was a Therma-Tru door made in Butler, IN. To replace the slider and to accommodate the larger window, we needed several 2” x 4”’s, a couple of 2” x 6”’s, an Oriented Strand Board or OSB to go on the outside where the slider was, and some drywall. The dimensional lumber was milled in either Canada or Maine and the OSB was made by LP Building Products in Roxboro, NC. The drywall was also made in the U.S by US Gypsum. To finish the outside, we needed to replace the vinyl siding and found NAPCO, which has facilities in Missouri, Pennsylvania, Tennessee, and West Virginia. The tools used by the contractor appeared to be the typical builder-type products, though when I ventured to Home Depot I noticed the majority were labeled as ‘Made in the USA’ from globally sourced parts.

So, there you have it. A tour of manufacturing in the United States through the lens of a kitchen remodel. The planning and waiting for the cabinets to be delivered was the longest part. The actual gutting of the old kitchen and the remodeling itself took about two weeks total. I was surprised at how much of what we purchased was indeed made in the U.S. I also made a point of purchasing most of the materials from smaller local companies. I was expecting my quest to find U.S. made products more challenging, but it was easier than I thought. I am glad I did. I can also say that the construction company, True Contractors, was also domestically sourced. That I know for sure, since I know all three folks who worked on the kitchen. I even pitched in a little on the construction, so we’ll call it four locally sourced contractors. It is nice to know that you can indeed find lots of things still made in this country. It may require some digging around and being purposeful, but it can be done.