Jeff Greene, former vice president of global government affairs and policy at Symantec, began a new role as director of the National Cybersecurity Center of Excellence (NCCoE) at the National Institute of Standards and Technology (NIST) on February 3, 2020.

For several years, Greene has served as an appointed member of NIST’s Information Security and Privacy Advisory Board, and as a special government employee at NIST to support the President’s Commission on Enhancing National Cybersecurity. He also worked closely with NCCoE as a Symantec representative.

Welcome back to the Director’s Corner! This blog series was created to provide readers with special insight into the cybersecurity work we are very proud to have completed and plan to accomplish in

Your employer has unexpectedly directed you to telework—and you are feeling overwhelmed. With many changes happening at once, telework security could be an afterthought or completely overlooked. This 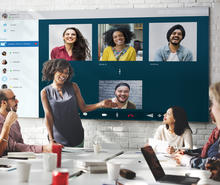 Conference calls and web meetings—virtual meetings—are a constant of modern work. And while many of us have become security-conscious in our online interactions, virtual meeting security is often an