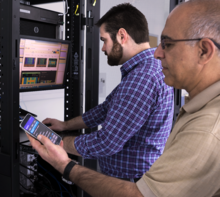 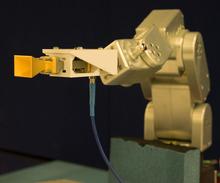 As an impartial and trusted source, we develop test methods to evaluate how effective centralized spectrum-management approaches are at protecting incumbent (primary) users. This work extends to assessing the performance of secondary wireless systems as well as comparing the spectrum-utilization efficiency of alternative solutions. The RF Technology Division's work directly supports Federal and Military spectrum users, whose allocated spectrum is the focus of tiered access spectrum sharing efforts in the US. This system will be critical to protecting the integrity of existing systems in the face of new spectrum users. Chief among these are upcoming devices that will use recently allocated bandwidth in the 3.5GHz range (Citizens Broadband Radio Service), expected to include a variety of hardware and applications such as Industrial IOT sensors and private LTE networks. Our RF Technology, NASCTN, and Wireless Networks Divisions are developing tests and reference implementations to support Spectrum Access Systems (SAS) that mediate RF usage between secondary and U.S. ground-based and shipborne radar systems. 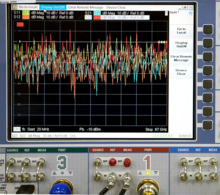 NIST CTL's Shared Spectrum Metrology Group is developing traceable and rigorous test methods for over-the-air testing of wireless systems. The ultimate goal of these and many of our other endeavors is to quantify RF environments, spectrum usage and wireless system behavior so that policymakers and industry leaders can make informed decisions based on NIST CTL's independent analysis. Regulators require accurate digital waveforms that can be used to test and certify commercial RF sensors. This Environmental Sensing Capability (ESC) is a focus of NIST CTL’s Wireless Networks Division, which is researching the use of 3.5GHz sensors to dynamically detect and protect against potential interference to Federal radar systems. The Wireless Networks Division also leverages artificial intelligence and data mining to classify and characterize 3.5GHz waveforms.

Mobile and wireless networking and Next generation networks