To decrease the large measurement-uncertainty gap between cryogenic radiometer measurements (such as those made by the NIST Primary optical watt radiometer) and field measurements, a large variety of transfer and working standard radiometers are being developed. 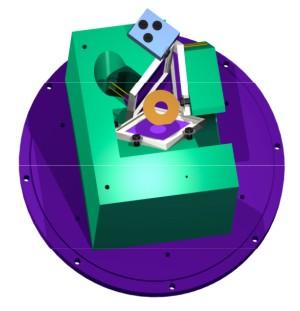 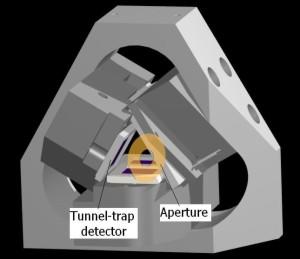 IR enhanced Si transfer standard – Since the limitations of Si trap detectors (such as responsivity changes between 400 nm and 450 nm, increased spatial non-uniformity and temperature coefficient of responsivity above 950 nm) increase the sub 0.1 % (k=2) uncertainties for wavelengths shorter than 350 nm and longer than 950 nm, this new 5 mm detector standard can be utilized between 300 nm and 1000 nm with an uncertainty of 0.1 % (k=2). It is free of interference fringes and can be calibrated against the cryogenic radiometer. Thereafter, it can be used as a reference detector for routine spectral responsivity calibrations of test detectors. It can measure both radiant power and irradiance with acceptance angles much larger than Si trap detectors. It has an NEP = 7 fW/Hz1/2 more than a decade lower than that of a Si tunnel-trap detector. It does not need temperature control.

Filter trap-radiometers – Tunnel-trap detector-based filter radiometers have been designed to make radiance and irradiance measurements for use in remote sensing applications. 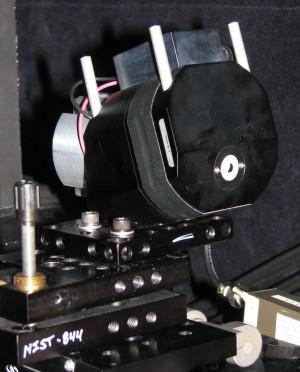 Sphere-input InGaAs and extended InGaAs detectors – A near-IR radiometer standard with similar performance to silicon trap-detectors has been developed to calibrate detectors and radiometers for absolute spectral power, irradiance, and radiance responsivities between 950 nm and 1650 nm. It is used at SIRCUS which is the NIST reference calibration facility for absolute responsivity. The power-to-irradiance scale conversion uncertainty is 0.05% (k=2). An extended-InGaAs detector has also been developed to obtain radiant power to irradiance mode converters to 2.5 µm. It is constructed with Spectralon coated 5 cm diameter integrating spheres equipped with 5 mm diameter input apertures mounted to the front of three extended-InGaAs radiometers. The radiometer converters are calibrated in power mode against the L-1 cryogenic radiometer.

Reference photometers – A new reference photometer has been developed to decrease the uncertainty of the detector-based photometric scale published in 1996. The detector is a large-area single-element silicon photodiode closed with a 0.5° window to avoid interference fringes in the output signal of the photodiode. The photopic filters are individually optimized and temperature controlled. 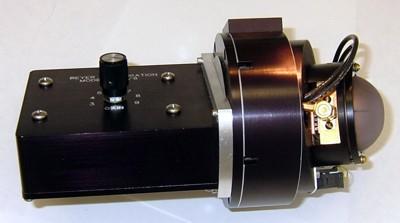 Pyroelectric radiometers – A LiNbO3 pyroelectric radiometer was developed to extend the NIST reference spectral power responsivity scale from the visible range to the ultraviolet (UV) and infrared (IR). These scales have now been realized with a relative standard uncertainty of less than 0.34 % (coverage factor k=1) between 250 nm and 2.5 µm.

New LiTaO3 pyroelectric radiometers were developed to extend the spectral power responsivity scale up to 19 µm. The gold-black coated pyroelectric detectors are temperature controlled using a thermoelectric cooler/heater and a thermistor sensor, and the relative responsivity is determined from spectral reflectance measurements at the FT IR Spectrophotometry Facility when the detector was equipped with a reflecting dome.

For routine, monochromator-based spectral power responsivity scale calibrations in the infrared, a group of newly developed pyroelectric radiometers have been developed with hybrid detector-amplifier packages. Hybrid packages were selected with noise-equivalent powers that are one order of magnitude lower than that of traditional pyroelectric detectors and current-amplifiers. The relative standard uncertainty of these detectors is 1% (k=2).

Visible and near-IR working standards - The NIST-developed first generation Si, Ge, and InGaAs radiometers and photometers, which measure power, irradiance, and radiance, made the transition possible from traditional lamp-based scales to lower uncertainty detector-based scales. A new generation modular radiometer-photometer system has been designed to satisfy the increased measurement and uncertainty requirements. These radiometers can measure DC or AC optical radiation within a dynamic signal range of 14 decades. 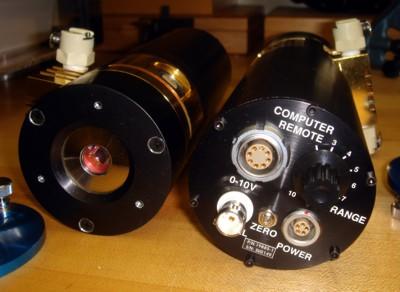 Mid- and long-wave IR working standards - Infrared radiometer standards have also been developed for the 2 μm to 5 μm and the 8 μm to 14 μm wavelength ranges.