We develop and learn how to characterize non-classical sources and single-photon detectors. It turns out that it is not enough to characterize detectors of single photons by detection efficiency alone, so any characterization attempt must provide a recipe for measuring other essential parameters. Understanding non-classical sources also requires characterizing multiple parameters, and we are learning which ones are the most useful ones and why. These efforts give rise to new metrological methods, also described below.

Detectors that can register individual photons are key to applications in quantum information, metrology, biology, and remote sensing, each having its own distinct detection requirements. We are developing and characterizing detectors with single-photon and photon-number-resolving capabilities. Research efforts include solid-state detectors such as avalanche photodiodes and the operational electronics that accounts for a much of their performance, cryogenic detectors based on microbolometers with true photon-number-resolution, and the multiplexing of these detectors for significant advantages in maximum count rate and deadtime over individual detectors.

As we see, there are quite a few physical principles that enable single-photon detection. Unfortunately, there are pros and cons to each technology, and there is no ideal detector for single-photons. Therefore, characterization of single photon detectors goes well beyond measuring their detection efficiency. In addition, we characterize other, less appreciated but equally important features of the detectors. Among them, dark count rates, afterpulsing, dead-time, and others. It is often important to treat single-photon detectors as devices that perform a quantum measurement, so characterization of positive operator-valued measure (POVM) becomes necessary. That is, single-photon detectors are treated as devices that make a projective (von Neumann-like) measurement on the quantum state of light. We use statistical methods to create and refine the measurements, and currently hold a world record for a verified calibration of a single-photon avalanche diode (SPAD). 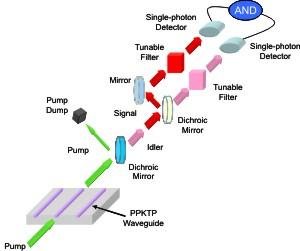 As with detectors, sources at the single photon level are critical for many applications. We develop new sources of single photons and entangled light, particularly those based on spontaneous parametric down-conversion and learn how to characterize these and other sources. Chip-scale (therefore easy to integrate) photon-pair sources that emit into a single spatial mode (therefore easy to collect) offer significant advantages in the goal for workable photonic computation system. Among various contenders, waveguided spontaneous parametric down-conversion is a promising candidate for the above goal because it can generate correlated photons predominantly in a single spatial mode while having a very small footprint. We systematically study such a waveguide-based photon pair source by measuring important performance parameters such as the temperature dependence of photon-pair production and the amount of quantum entanglement produced, which is critical for the success of quantum information applications.

*In-situ light source characterization* Different light sources emit light with different photon number distributions. Example of typical timelines of photon detections are plotted above and they are visually distinguishable. Therefore, a single-mode thermal source can be readily distinguished from a laser source, and from a single-photon source (SPS) by just photon counting - a non-invasive, in-situ measurement. This property can be used to reconstruct complex mixed sources of light to better understand and improve their physics.

When detecting photons one by one, the exact time of each photon's detection is available. We use statistical methods, such as correlation functions, to gain insight into the physics of different light sources without examining the sources themselves. That is, the only information we use is the statistics of the light produced by that source: i.e. we are only allowed to look, but not allowed to touch. In fact, in many cases light emitted by a light source is the only available asset to examine: a source can be buried deep in a solid-state crystal, be it a diamond, or a semiconductor, or something else.

We recently developed a method where we use time-resolved correlation functions to determine if the properties of a nonclassical field emitted by a source change during its excitation-emission cycle. Coupled with a physics model of a source, one can assess the underlying mechanisms and dynamics of light emission.

Another method that we recently introduced uses high-order photon number statistics to separate contributions from different modes of a mixed emitter. Particularly, we can reconstruct the contribution from a single-photon emitter (or a few emitters) over a (often much stronger) classical background, such as scattered laser light.

A motivating factor for our source and detector development is our goal to tie our current radiometry standards, which are designed for relatively high power levels, to detectors and sources that operate at the few photon level. Making this connection offers the possibility of major improvements in the uncertainties achievable with current methods. For example, we have verified a correlated-photon detector efficiency technique against conventional measurement to the best levels of uncertainty yet achieved. This resulted in the development of a number of transfer standard detectors designed specifically for the low light levels encountered in photon-counting measurements. These detectors will made be available to outside users. Another effort used correlated photons as a tool to measure source spectral radiance. With this method we demonstrated fundamentally absolute radiometry measurements as far into the infrared as 8 μm, while using only an uncalibrated visible detector.

*Detector characterization and calibration* We refine old and develop new methods for detector characterization and calibration that help in revealing all the minute details in their response to faint light. Calibration of single-photon detectors is not limited to finding their detection efficiency, because other parameters, such as deadtime, afterpulsing etc are also of critical importance.

We made a metrological verification of the correlated photon method for measuring photon counting detection efficiency to an uncertainty of ~0.15 % (k = 1). We performed a test using a fiber-based entangled photon source that ruled out certain nonlocal hidden variable models as an alternative to quantum mechanics.