Greenhouse gases (GHGs) stream out of power plants, seep out of landfills, flow from vehicle traffic and rise from commercial buildings and homes. Emissions of carbon dioxide, methane and other GHGs are nearly ubiquitous, and this makes them difficult

to measure. But as countries around the world work to reduce these emissions, decision-makers need real-time feedback on how well their efforts are working. For this reason, accurately measuring emissions is more important than ever.

Today, most emissions estimates are calculated using indirect measures such as energy consumption. But NIST's Greenhouse Gas Measurements Program is developing standards and methods for measuring GHG emissions directly based on atmospheric observations taken from surface stations, aircraft and satellites. These two approaches—one based on energy consumption, one based on atmospheric observations—are complementary and will allow us to attack this complex measurement problem from two sides.

Both approaches allow us to see whether we're making progress toward, and ultimately achieving, emissions reductions targets. Both also provide independent means of totaling national emissions inventories. But the traditional approach tends to break down results by economic sector on a yearly basis. Measurements based on atmospheric observations, on the other hand, are more specific to a place and time, and can attribute emissions to specific sources—something that can be very helpful when attempting to reduce those emissions.

For example, city planners might change downtown traffic patterns to reduce the amount of time that vehicles spend idling in traffic. But how much do emissions actually fall? Near real-time GHG measurements based on atmospheric observations, in combination with more traditional estimates based on vehicle flow, will give the most accurate answer to that question. This combined approach will help decision-makers reduce emissions in the most cost-effective way.

Because cities account for an estimated 80 percent of GHG emissions, they are an obvious place to focus emissions reduction efforts. For this reason, NIST has established three Urban Test Beds—areas where scientists are developing advanced technologies for directly measuring GHG emissions at the scale of an urban region, a city or even a single neighborhood. The three urban test beds established to date are the Indianapolis Flux Experiment, or INFLUX; the Los Angeles Megacity Carbon Project; and the Northeast Corridor Project, which stretches from Washington, D.C. to Boston. 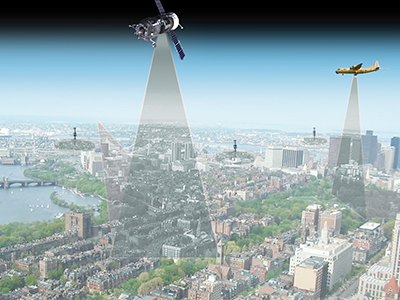 Credit: NIST
Within these urban test beds, we are engaged in research projects involving networks of automated, high-accuracy air sampling stations on towers, buildings and hilltops, as well as air sampling done from aircraft. Scientists working on these projects use this data to map GHG concentrations at local scales and to track how those concentrations change throughout the day and across the seasons.

By combining air sampling data with atmospheric models, scientists can simulate the mixing of GHG emissions in the atmosphere. This allows them to visualize the flow—or flux—of GHG emissions into and out of the atmosphere at small spatial scales, and to attribute those emissions to specific sources such as individual neighborhoods, traffic corridors and industrial zones. These methods can also reveal what may be thought of as negative emissions—the uptake of carbon dioxide by urban forests and green spaces.

Urban GHG measurements are just one promising area of research that our program supports.

Our program's success would not be possible without the collaboration of partners in private industry, academia and government. We work in close partnership with the NOAA Office of Oceanic and Atmospheric Research (OAR), Earth Systems Research Laboratory, with which we share a campus in Boulder, Colorado, and which we rely on for accurate measurements of atmospheric trace gases and atmospheric dynamics. We also collaborate with OAR's Air Resources Laboratory on modeling greenhouse gas dynamics in the lower atmosphere.

The NIST Greenhouse Gas Measurements Program is working to develop new technologies for measuring GHG emissions directly, and for understanding how emissions interact with the atmosphere over small scales in space and time. This will provide businesses and governments with the data they need to find the most cost-effective ways to reduce their emissions. And as people work together to reduce emissions nationwide, it will provide us all with the information we need to know whether we are reaching our goals.