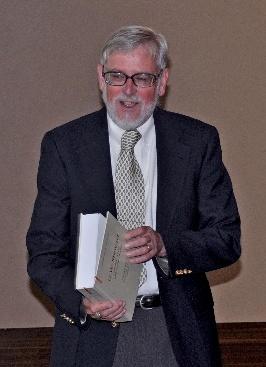 G.W. (Pete) Stewart, Distinguished University Professor Emeritus of Computer Science at the University of Maryland and long-time faculty appointee in ITL's Applied and Computational Mathematics Division, was recently honored by a conference, a book, and a special journal issue organized in commemoration of his 70th birthday.

The conference, Numerical Linear Algebra: Perturbation, Performance, and Portability, which was held July 19-20, 2010, in Austin, Texas, was attended by nearly 100 of Stewart's friends and colleagues from around the world. Eighteen speakers, including his son Michael, former students, and postdocs presented their latest research. Cleve Moler, Chief Scientist of The MathWorks and original developer of MATLAB (which contained software developed by both Stewart and Moler), presented an after-dinner speech about Stewart and his work.

Birkhauser, in their Contemporary Mathematicians series, has also recently published G. W. Stewart: Selected Works with Commentaries, in Stewart's honor. Edited by Misha Kilmer of Tufts University and Dianne O'Leary of the University of Maryland (another faculty appointee in ACMD), the new book collects 44 of Stewart's papers, along with over 100 pages of essays putting his work in historical perspective. For more information, see http://www.springer.com/birkhauser/mathematics/book/978-0-8176-4967-8.

In addition, a special issue of the journal Linear Algebra and Its Applications has been organized in Stewart's honor. It is currently in press.

Stewart is a world-renowned expert in computational linear algebra. He has made fundamental and highly cited advances in the analysis of rounding error in numerical computations, perturbation of eigensystems, generalized inverses, least squares problems, and matrix factorizations. He has developed efficient algorithms for the singular value decomposition, updating and downdating matrix factorizations, and the eigenproblem that are widely used in applications. His six textbooks are models of exposition that have educated multiple generations of researchers. Stewart's contributions have led to numerous honors, including election to the National Academy of Engineering. Stewart will be 70 years old on October 1, 2010.

(The photo above was taken at the conference by Eric de Sturler of Virginia Tech. Used with permission.)

Mathematics and Statistics and Numerical methods and software