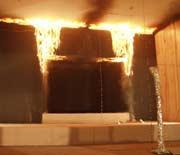 The Commerce Department's National Institute of Standards and Technology (NIST) today reported solid progress in the agency's ongoing federal technical investigation of the Feb. 20, 2003, fire at The Station nightclub in W. Warwick, R.I. At a press briefing in Providence, R.I., the investigation team leaders also asked the people of Rhode Island to volunteer information to help the effort continue toward a successful outcome.

"As our investigation moves into its next stages, NIST needs individuals and groups to share with us any information that they have about The Station nightclub, its operations and emergency procedures, and the events in the building on the night of the fire," said James E. Hill, acting director of NIST's Building and Fire Research Laboratory. "Providing us key information could greatly enhance our investigation. When we complete this effort, we want to be able to provide the kind of recommendations that could prevent this kind of tragedy from being repeated in other communities around the United States in the years to come."

The investigation is being conducted under the authority of the National Construction Safety Team (NCST) Act. Under the act, NIST is authorized to investigate building failures. The NIST investigations will establish the likely technical causes of the building failure and evaluate the technical aspects of emergency response and evacuation procedures in the wake of such failures. The goal is to recommend improvements to the way in which buildings are designed, constructed, maintained and used in order to increase both occupant safety and structural integrity.

NIST announced at the press briefing that it has established a toll-free, anonymous phone line for persons with information to contact the Rhode Island investigation team at (877) 451-8001. Individuals also can provide information by fax at (301) 975-6122; by e-mail at ncst [at] nist.gov; or by regular mail at NCST Rhode Island Investigation, NIST, 100 Bureau Dr., Stop 8660, Gaithersburg, Md. 20899-8660.

The Rhode Island investigation team's primary objectives are to:

At today's press briefing, NIST's lead investigator of The Station nightclub fire, William Grosshandler, said that the investigation team had made significant progress toward achieving these objectives.

Among the accomplishments to date, Grosshandler said, are:

Among the key data still required by the NIST investigation team are:

Grosshandler said that the NIST investigation team will accept this information in any format, including photographs, videos, recordings, plans, documents, material samples and personal recollections.

For more information on the Rhode Island fire investigation and the NCST, go to http://www.nist.gov/ncst. For a comprehensive Web site on NIST's other ongoing NCST investigation—the study of the fires in and collapse of three buildings at New York City's World Trade Center complex following the terrorist attacks on Sept. 11, 2003—go to http://wtc.nist.gov.

As a non-regulatory agency of the U.S. Department of Commerce's Technology Administration, NIST develops and promotes measurement, standards and technology to enhance productivity, facilitate trade and improve the quality of life.