Facebook
Linkedin
Twitter
Email
“People have been known to achieve more as a result of working with others than against them.”
– Dr. Allan Fromme

Reflections on MEP at 25 – Collaboration, Cooperation and Partnership

In Part 1, Reflections on the Manufacturing Extension Partnership at 25 looked at how the network of Centers grew from the original 7 to today’s 60. In part 2, it looked at the evolution of the services provided to manufacturers. One of the keys to MEP is the word “Partnership.” It is in our name, it is what we do. We recognize the fact that we can’t accomplish the mission alone. We have to work with others –Federal agencies, state agencies and governments, trade and professional associations, universities, community colleges, local consultants, third parties and an array of others.

In this segment, Reflections will look at some of the work for and with other Federal agencies and other organizations. It also takes a look at the people side of MEP highlighting how the program has tapped into personnel from other agencies and programs to support the mission of MEP and help us gain the knowledge and experience to best serve U.S. manufacturers.

Let’s start with a basic definition:
"Partnership – Arrangement or understanding, in which parties agree to cooperate, collaborate, work together, team up or join forces to advance their mutual interests."

Within the MEP System, there are a myriad of such arrangements and understandings. 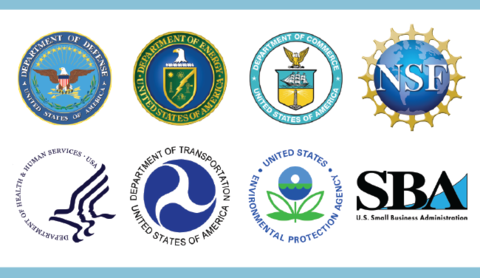 The biggest financial help the system received came from DOD during the Technology Reinvestment Project (TRP) in 1993-1995. The $250 million for a defense manufacturing extension system allowed the MEP system to expand from the original seven Regional Centers for the Transfer of Manufacturing Technology (MTCs) to 42 by the end of 1995. Additional funding allowed for the development of some common infrastructure and a set of tools, assessments and training for the national network. It also allowed NIST to add staff.

A significant effort to work more closely with the DOE laboratories also took place about this time. Those labs were (and are) recognized as being exceptional sources of technology, and consistent with MEP’s enabling legislation, should be places that MEP Centers and their clients could go to for those technologies. The challenge then (and now) is that it is difficult, particularly for small- and medium-sized manufacturers, to work with the labs. The principal disconnect between the groups is usually one of communication.

Developing a streamlined process and underlying cost model to coordinate the connections between MEP and the DOE labs in support of manufacturer’s technology has been challenging. However, that’s not to say that MEP doesn’t collaborate or cooperate with the labs. More recently, the two California MEP Centers came together with Lawrence Livermore and Lawrence Berkeley National Laboratories, as well as several universities, community colleges and local and state agencies to form the California Network for Manufacturing Innovation (CNMI), which is focused on accelerating the adoption of advanced manufacturing technologies in CA companies. For more on CNMI, see earlier blog posts and www.cnmi.biz.

There are other examples of partnerships with DOE including supplier scouting efforts resulting from many of the “Made in America” clauses in legislation associated with the American Recovery and Reinvestment Act. In addition, MEP has on-going efforts in supplier scouting for DOD and DOT, and MEP continues to be actively engaged in supporting other agencies in other ways. The MEP System has and will continue to support the Army and DOE, respectively, in deploying the tools and techniques for Model-Based Enterprises (to convert from 2D blueprints to 3D electronic models) and in developing and deploying training and implementation of building energy systems re-tuning for industrial, commercial and government buildings.

In addition these projects, members of the NIST MEP staff support other agencies on advisory boards such as the Food and Drug Administration’s Device Good Manufacturing Practices Advisory Committee and proposal review panels, e.g., for SBIR/STTR programs.

More recently, there’s been a greater recognition of the power of working together. These efforts sometimes take the form of coordination, like the Interagency Network of Enterprise Assistance Providers (INEAP) and Business USA (formerly CommerceConnect); sometimes involve joint field operations, like the Economy, Energy and Environment (E3) effort , the Green Suppliers Network (GSN) and the Workforce Innovation in Regional Economic Development (WIRED); and sometimes involve joint solicitations, like the Energy Efficient Buildings Hub (EEB Hub), the Advanced Manufacturing Jobs and Innovation Accelerator Challenge (AMJIAC) and Make It in America.

Business USA is an intra-Commerce effort to coordinate the resources of the Department to support small businesses including manufacturers. Specific services include assessing company needs; identifying opportunities for business growth; introducing firms to federal, state, local and nonprofit business assistance programs; leveraging established partner relationships; and helping businesses reach their goals. INEAP is a network of people across agencies whose mission is to assist small businesses working together to coordinate individual agency activities through effective communication and sharing of ideas. The network’s focus is on supporting small- and medium-sized businesses in a variety of areas including sustainability, technology transfer, business management, export, finance, workforce training, innovation, energy efficiency and disaster preparedness.

We’ve worked with a lot of people from other agencies and other organizations. Most came under some form of detail and stayed for a relatively short period of time. Others came over and stayed on to become permanent NIST MEP employees. The value of these personnel exchanges can be immense.

MEP gains knowledge, skills, abilities and relationships it needs to carry out its mission, along with better understanding of the sending organization’s mission, culture, resources (and limitations) and ways of doing business. The sending organization gets back someone with a greater breadth of knowledge and understanding about small manufacturers and our part of the federal government. If it’s MEP doing the sending, we get back people with more knowledge of the place they went and a broader perspective on what’s possible and doable. A few examples:

On the flip side, we’ve also sent a lot of MEP people elsewhere. That list includes:

All in all, the work we do for and with others makes for a stronger, more robust MEP System, more capable of meeting the needs of today’s manufacturers.

"To give real service you must add something which cannot be bought or measured with money, and that is sincerity and integrity."
—Douglas Adams
U.S. Manufacturing

Dave Cranmer is the Deputy Director of the Hollings Manufacturing Extension Partnership (MEP) at the National Institute of Standards and Technology (NIST). With MEP since 1993, he has overseen...

Earlier this year, the Minority Business Development Agency (MBDA), a part of the U.S. Department of Commerce, celebrated its 50th anniversary. The recognition

According to information from the Centers for Disease Control and Prevention (CDC), every year 48 million people in the U.S. get sick, 128,000 are hospitalized

We are very excited about bringing Manufacturing industry back to the US. At Tennessee Technological University, we designed a new master's degree in Manufacturing Sustainability (in the approval process) to address the need of Manufacturing Industry to development E3 workforce. We would like to be part of the national Working Together efforts.
The MEP is a great concept. I had the opportunity to work for one of the MEP centers for several years. The challenge however is that the focus on the small manufacturers sometimes get's lost in trying to acheive the metrics of MEP National. Since leaving the MEP I have been working with small manufacturing companies and would love to have help at improving our organization. But the MEP system is based more on center revenue and MAIM metrics not on helping organizations. So I have not used the MEP for help. The concept of the MEP is great but it just seems that the metrics driving the centers does not align with the mission of the MEP. Thanks for providing the services that you have and even with the challenge above the MEP system has done some great things at promoting improvement and growth methodologies to small companies.

If you have any questions about our blog, please contact us at mfg [at] nist.gov.