Our goal is to prevent the catastrophic failure of ballistic body armor by developing measurements and predictive models to test and determine the long-term reliability of polymers used in ballistic resistant armor. Our approach, which utilizes conventional analytical techniques in addition to newly developed minimally invasive test methods, seeks to identify the chemical and mechanical mechanisms underlying reductions in ballistic performance and to link these mechanisms to chemical structure and deformation mechanics.

To quantify the impact of mechanical degradation on ballistic fibers, NIST developed a novel device for controlled folding of yarns and woven fabrics. In addition, we developed test protocols that employ single fibers to assess the effect of folding using a recently developed modified single fiber test and a newly acquired commercial, rapid, automated fiber testing apparatus. Morphological changes in the folded fibers are being quantified by small angle x-ray scattering (SAXS).

Systematic and controlled extraction procedures designed around the molecular architecture of the ballistic fibers are also being developed to elucidate the factors that cause their hydrolytic degradation. The extracted material is being evaluated by x-ray fluorescence spectroscopy, matrix assisted laser desorption ionization (MALDI) mass spectrometry (MS), and a newly acquired gas chromatography(GC)/MS. These techniques are augmented by the use of novel derivatization methods to facilitate the detection of compounds suspected of causing hydrolytic degradation. 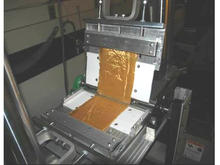 • Ballistic resistant armor is credited with saving more than 2,500 lives; but in 2003, the failure of a first responder vest identified the need for long-term stability and durability tests.

• NIST developed a tool to assess the impact of folding (shown, right) during normal wear on ballistic body armor and demonstrated that repeated folding can reduce ballistic resistance of the armor by up to 40%.

• As a result of NIST's fold tests, the NIST Office of Law Enforcement Standards (OLES) and the Department of Justice's National Institute of Justice (NIJ) are incorporating folding as one of the critical durability items for the new revision of the ballistic fiber standard.

This year, data on poly(benzoxazole)(PBO) ballistic fibers obtained with NIST's automated fold tester have demonstrated that repeated folding decreases the material properties governing ballistic performance. Initial tests designed to simulate six months and 10 years of wear indicate performance reductions of 15% and 40%, respectively.  Preliminary small angle x-ray scattering(SAXS) data from these damaged fibers suggest that the transition from fibrillar failure to brittle failure (shown below) that accompanies repeated folding is associated with the formation of micro-cracks perpendicular to the fiber axis.

These results were supported by modified-single fiber test results from new, hydrolytically aged, and field returned vests. The back panel of a compromised vest indicates that in addition to the environmental degradation experienced by PBO ballistic fibers, folding of these fibers results in localized regions whose fiber properties are weaker relative to the fibers in the non-folded regions by 10% to 15%. In addition to this degradation mechanism, the fibers in the hoop direction of used vests were found to be even weaker, with strength losses between 20% to 30% relative to those in the non-folded regions. The source of this latter degradation mechanism is under investigation.

Residual phosphoric acid, left over from the ballistic fiber spinning process, has long been targeted as a potential root cause for chemical degradation of PBO fibers. To date, proof of this mechanism does not exist. However, key findings from our hydrolytic study indicate that the phosphorus detected by many researchers using simple aqueous or supercritical fluid extractions are phosphate esters added by the manufacturer to aid in processing of the fibers. We have further demonstrated by fluorescence spectroscopy, that 75% of the phosphorus remains in the fiber after aqueous extraction on fibers that have been cut and pounded.

This hypothesis has been supported by model compound studies of the PBO reaction process that indicate that the phosphoric acid can react with the diamino-dihydroxy benzene compounds used to prepare PBO and form a stable aromatic phosphate ester (see figure below).

These results suggest that the remaining phosphorus is not trapped in microvoids, but is chemically bound to the PBO chain structure and therefore not easily leachable. However, the bound phosphorus provides regions of very localized acidity that can accelerate fiber degradation.