We employ combined measurement and modeling to enhance understanding and capability of nanoscale strain-mapping via super-resolution confocal Raman microscopy (CRM), electron back scattered diffraction (EBSD). Stressed micro- and nano-structures are simulated via the finite element method. Simulations go beyond usual mechanical response and predict Raman spectra and diffraction pattern shifts. As the simulations and their inputs are improved and become more faithful to experimental measurements, we learn how to draw better inferences from nanoscale strain-mapping experiments, validate our understanding of how the measurements work and develop techniques to use simulations and measurements together to extract the most possible information.

As part of the Nanoscale Stress Measurement and Standards Project, stress and strain in Si and related materials such as Si1-xGex are measured directly by two complementary techniques, super-resolution confocal Raman microscopy (CRM, Fig. 1), electron back scattered diffraction (EBSD, Fig. 2) with the goal of pushing both the limits of resolution and accuracy for both techniques. CRM measures the red shift of incoming light that is focused down to wavelength limited spot size. The amount of red shift depends on the strain in the sampled volume. EBSD is performed with a Scanning Electron Microscope, thus, its resolution is very high (a few nm). EBSD measures small differences in diffraction patterns using digital image processing with strain sensitivities of about 10-4.

Mapping small structures with large strain gradients introduces new challenges to drawing proper measurement inferences. Additionally, each technique gives an incomplete strain state. CRM gives a scalar response or possibly a vector response, while EBSD is insensitive to dilatational strain. Finally, each technique requires a great degree of post processing, such as spectral fitting and mapping of diffraction pattern distortions. It is difficult to determine the true accuracy of either technique or whether the procedures and analysis are optimal.

To address these issues, we perform strain mapping and finite element modeling of various test structures. The finite element approach allows more rigorous prediction of Raman shifts and interaction volume effects in EBSD maps. It also eliminates the need to make unrealistic approximations in some instances regarding the strain state of materials and structures. Using the finite element method to predict Raman shifts and EBSD response, we are able to better confirm the accuracy of our measurements by relating CRM and EBSD to other measurements such as via atomic force microscopy, and we also develop measurement approaches where structures are measured and simulated simultaneously. While requiring greater effort, the combined strain map – FEM approach allows us to better test our assumptions regarding individual structures and samples while also obtaining more strain information than would be available without accompanying simulation. Figure 3 shows predictions of Raman shifts from strain in a through Si via. The shifts are calculated using the strain state at each point in the simulated volume. Figure 4 shows finite element simulation and CRM mapping of a wedge indent. The wedge indent has a simple, nearly plane-strain deformation, but allows measurements of material rotations and strain gradients to be tested. 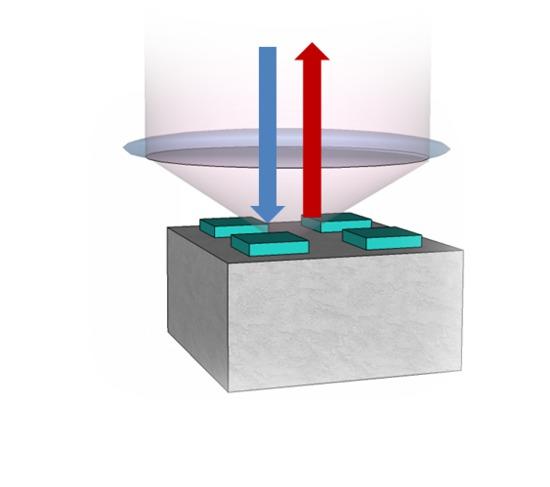 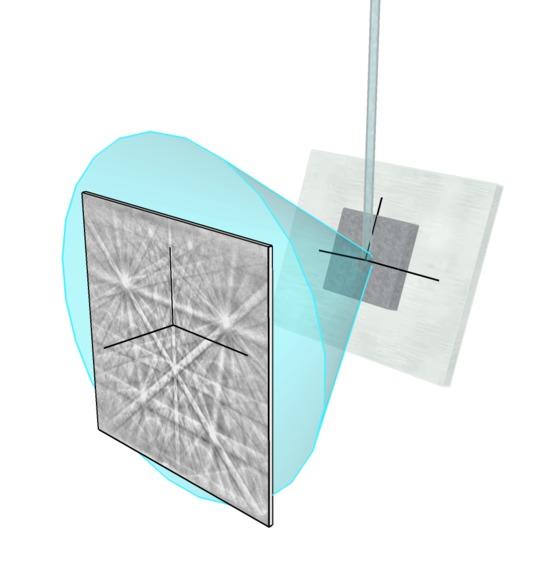 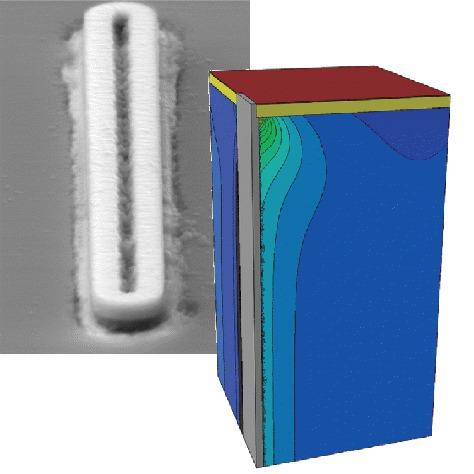 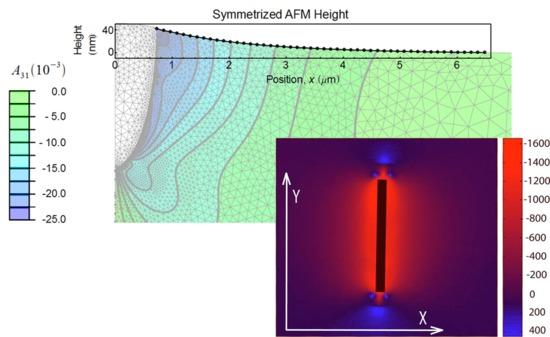