Researchers in the Nanomechanical Properties Group, Materials Measurement Science Division, MML have designed and built an instrumented indentation device coupled to a Raman microscope that allows in situ Raman measurements of optically transparent materials under load.  The capabilities of this unique instrument have been demonstrated in studies of pressure induced phase transformations in silicon thin films and densification in silica glasses.

Instrumented indentation (IIT) is a technique widely used in the study of the mechanical deformation of materials on micrometer length scales. A traditional indentation measurement involves the application of force to a specimen using probes of various geometries, while simultaneously measuring the material displacement. Raman microscopy is a spectroscopic method that can yield insight into the atomic scale processes that occur during mechanical deformation, including the development of strain and transformations in crystalline phase. Despite the obvious complementarity of these two methodologies, they have typically only been combined in a serial fashion, wherein the spectroscopic analysis of the material might take place prior to and after the end of a mechanical loading/unloading sequence. There is significant interest in in situ analyses of materials during mechanical transformation, as such an approach promises a richer understanding of the underlying physics than is likely possible with analysis limited to pre- and post-transformation. For example, use of a spectroscopic technique to follow the full path of a crystalline phase transformation rather than just the endpoints opens up the possibility of identifying metastable intermediate phases.

In response to this metrology need, the NIST research team has designed and built an indentation instrument that is coupled with a laser scanning Raman microscope to conduct in situ spectroscopic analyses of the mechanically deformed regions of optically transparent materials under contact loading. This novel instrument has been demonstrated for in situ studies in both a microspectroscopy and a laser scanning Raman imaging configuration. 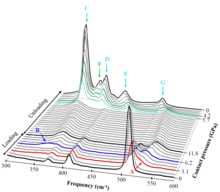 Several different materials have been studied with the technique to date. Indentation-induced phase transformations in silicon-on-sapphire (SoS) thin films have been studied extensively.  The figure at the right shows the change in the Raman spectra of SoS during indentation (loading and unloading) with a conospherical indenter. The letters indicate the bands associated with the different Si phases that are formed during the process.  Notably several phase transition pressures were shown to be lower in the presence of shear stress than in the purely hydrostatic case.  Evidence was provided for the existence of the predicted bct5 phase (A,B) and the appearance of the r8 (C, E, G) and bc8 (C, D, E, F) phases was shown to happen simultaneously. 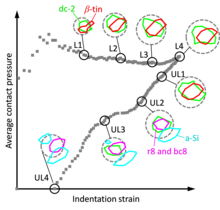 The addition of laser scanning capability allows the acquisition of in situ Raman images of specimens held under various (un)loading conditions.  These in turn can be converted into maps reflecting the spatial variation in the appearance of the various crystalline phases. The figure at the left graphically summarizes a series of such maps for indentation on a SoS specimen with a diamond conospherical probe.  The inset at each (un)loading step shows the spatial distribution of the important phases present with respect to the indentation feature indicated by the dashed grey line. 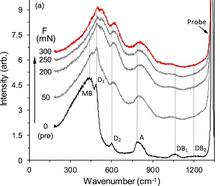 The RSE-IIT technique has recently been extended to the study of deformation in non-crystalline materials, such as thin films of amorphous silicon and glasses. Refinements to the optical design have been implemented to limit the Raman depth of field, reducing the spectral background from unperturbed material, thus facilitating the study of deformation in bulk materials. In anomalous glasses, the application of external mechanical stress results in densification. This material response is reflected in variation in the shape and position of the Raman bands of fused silica as is shown in the figure to the right where the so-called main band (MB) of fused silica broadens and shifts to higher Raman shift as more material undergoes densification upon increased loading.