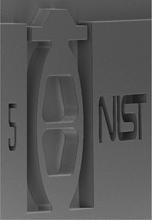 We are designing, fabricating, and testing specialty test structures largely based on a theta geometry. The theta test specimen is a simple and elegant way to measure the mechanical properties of materials at ultra-small length scales without the need for special grips. The test specimen is diametrally compressed via instrumented indentation, or nanoindentation, which places the central "web" section in uniform tension. Finite element method (FEM) modeling is used to design robust specimen and loading configurations. Emphasis is placed on measuring strength, fracture resistance, and compliance. Fractography is used to correlate mechanical testing results to fabrication conditions. Methods to fabricate, inhouse, silicon (Si) test structures with deep reactive ion etching (DRIE) have been developed. Test specimens of Si and other materials such as poly-Si, SiC, poly-diamond, and alumina that are made by DRIE, focused ion beam etching, and laser micro-machining will be acquired in collaborative activities with the Center for Integrated Nanotechnology (CINT), the Pennsylvania State University, and Cornell University. In addition to the theta test structure, we are also investigating a new C-ring structure to measure nano-scale bending strengths.

MEMS and NEMS components are typically formed via lithographic and etching processes, which are known to leave residual surface features, stresses, and chemical remnants that ultimately control component strength. It is still not clear, however, how these surface characteristics interact with loads and deformations imposed during device operation to induce failure and truncated lifetimes. Thus, the development of new mechanical test structures and methodologies to measure the mechanical properties of materials at ultra-small length scales is required.

To address this measurement need, a first-generation of test specimens was fabricated from Si by through-wafer DRIE and tested using load-controlled instrumented indentation. The test specimens consisted of round and hexagonal theta geometrics.

The average strengths ranged from 450 MPa to 600 MPa, with fractures primarily initiating on the {111} plane, the preferred cleavage plane in single crystal silicon. From linear-elastic fracture mechanics, these average fracture stresses correspond to critical flaw sizes of 400 nm to 600 nm. In fact, fractography of the broken web sections indicated that fractures typically originated at etch pits from the DRIE. The etch pits ranged in depth from 200 nm to 500 nm. Thus, it is clear from these preliminary studies that the etch pits acted as strength limiting flaws that ultimately controlled the overall strength of the component.

The first generation test structures, in addition to demonstrating the viability of the measurement technique, also illustrated problems with the test method that needed to be addressed prior to broader implementation: mounting the specimens for testing was difficult, non-ideal loading led to undesirable stress concentrations,and collecting the specimen parts for fractography after failure was difficult. Thus, a second generation of structures was developed. Test specimens included two theta geometries, the original design and a triple fillet design, and a new C-ring geometry to measure nano-scale bending strengths. The new specimens were designed with "top hats" to minimize misalignments and stress oncentrations,fabricated using silicon-on-insulator (SOI) wafers to provide better control of device thickness and more robust bases for 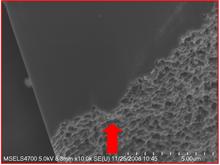 Fracture origin in a C-ring specimen

manipulation and mounting,and tested using a break-detection routine on the instrumented indenter to minimize damage to the specimen after failure. The force-displacement curves were linear to fracture. Fracture strengths as high as 2.5 GPa were found, with values greatly dependent on the web thickness and surface finish. As with the first generation samples, fractography revealed that etch pits from the DRIE process acted as strength limiting flaws. Alternative DRIE processes to generate different surface finishes are being investigated, thus allowing the sensitivity of strength and fracture properties to surface structure to be assessed. In addition, although emphasis is currently on Si test structures, other materials such as poly-Si, SiC, poly-diamond, and alumina will be investigated through collaborative activities.